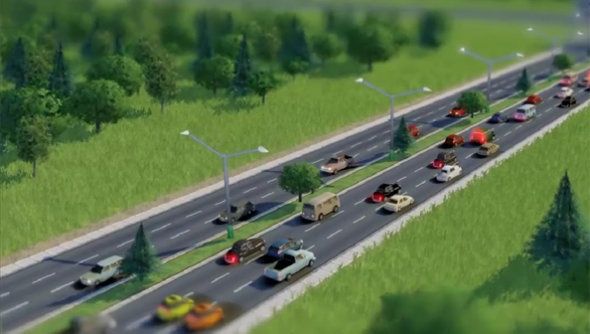 This is something like that dancing warden advert in reverse. Maxis may have managed to relieve the heartburn of players desperate to fall in love with SimCity by solving some of the game’s more crippling issues with traffic.

Maxis have “tuned” traffic congestion, and reckon they’ve fixed some silly AI decision-making that caused cars to clog up at intersections.

Emergency and delivery vehicles will now get priority over regular traffic when leaving their respective garages, and nee-naws of the police, fire, and ambulance variety have learned to drive in empty lanes to circumvent queues at intersections when necessary.

Elsewhere, the patch sees some performance improvements come to low spec systems, and ensures that the bulldoze tool is useable for all units and buildings. And if you’re in Asia, you’ll be pleased to hear that a new server, ‘Asia 2’, is coming later today.

The instability that brought Origin to its knees and players to tears on launch is now all but sorted, Maxis announced last week. But now we can all get in it, how’s the game looking from the ground?