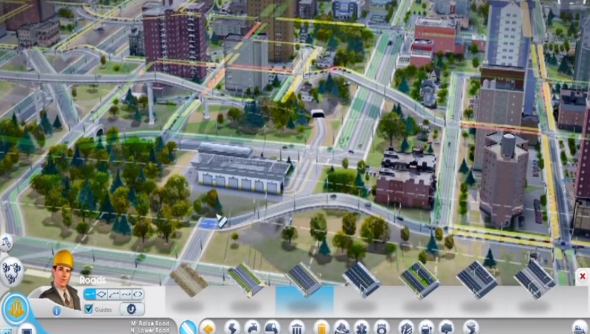 Traffic of one kind or another has always been SimCity’s problem: whether that’s players piling on unprepared servers at launch, or endless yellow cabs clogging its streets with conspicuous bugginess.

Maxis’ Guillaume Pierre will talk you through the new raise/lower tool, which can increase your city’s prospects one six metre increment at a time:

Press the ‘M’ key to raise your road, and the ‘N’ key to lower it. After three presses in either direction, the game will show the potential bridge or tunnel you’re about to lay. If a bridge is high enough, you can throw another road beneath it – solving some of SimCity’s chronic space issues.

The tool can also be used in lesser degrees to produce trench roads and retaining walls – though their purpose seems more aesthetic than practical.

Julian saysSimCity update 7 will have its vehicles think a little further ahead. Will improved traffic options be enough to bring frustrated fans back to the game, do you think?