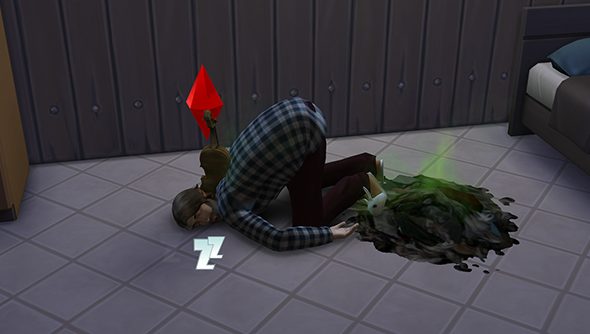 The Sims 4 is a game in which you can get angry and do an angry poop into a toilet. It’s a game in which, if you read a book about mischief for long enough, you can convince another person to streak through their neighbourhood. It’s a game with an option to shower in such a way that your Sim comes out feeling “flirty”. And if that’s not a euphemism for giving yourself a soapy seeing to in the bathroom, I don’t know what is.

The Sims 4 is the latest in the world-conquering virtual doll house series, a very unique set of perennial games that reliably arrive feature-light and skeletal, before fattening themselves up with downloadable content and expansion packs of varying quality. Over the course of years they become grotesque and bloated beacons of abject corporate cynicism, before finally shedding that gross pupa and emerging reborn and naked as another numbered sequel, stripped of all of its fineries and ready to go all over again.

So there’s loads missing here, obviously. A lot of it should be expected: pets have never been in the vanilla game and always arrive somewhere around the first or second expansion pack. The range of clothing is generous enough but broadly generic, while the furniture options feel particularly limited. There are only eight career choices (in total the series has now had over sixty) though they allow you to specialise in one of two ways once you achieve a certain rank in your chosen profession. There’ll be more furniture and clothes and careers and cats in the future. All that will come later.

Some of what’s missing is less obvious and a bit more galling for fans of the series. Create-a-Style, which felt like the correct way to approach interior design in The Sims, is gone. The lack of swimming pools is the most baffling and as yet unexplained departure from previous games, as is the regression from having babies go through a toddler stage, to instead evolving from crib to full-grown child in one presumably hormone-flooded day.

You can call still a maid to tidy your home, but if there’s a way to call a repairman, I haven’t discovered it. Instead every sim you control will eventually become an expert technician through their ability to destroy objects in their home through everyday use. Other skills, such as cooking, are easier than ever to learn through brute repetition. Deaths through electrocution and housefire are probably still in here somewhere, but they’re far less likely to happen.

Things feel a bit more clinical, a lot cleaner and less flabby. Sims have gone back to teleporting between the places they need to be instead of driving in their cars, which, while obviously less realistic, cuts down on a lot of the timewasting weirdness as the little virtual fusspots figure out how to get to their vehicles. Sims get out of bed without complaining for half an hour, their morning routines are easier to manage and their needs are generally more forgiving

Do these missing bits matter? Only if you care enough to notice they’re gone, in which case you’re probably already decided on The Sims 4. For the most part, the gutting has freed up Maxis to refocus on creating a more stable game in a much improved engine, one that may be better equipped to deal with expansion in the coming years.

Neighbourhoods have been reworked, probably with such expansion in mind. Now there are two worlds, one a greeny grassy suburban niceville, the other a reddish desert outback dustbowl. Each of these contains smaller districts of four to six houses or public lots, which once you’ve loaded you can pan out and around to see other local sims going about their business. To go from inside one lot to inside another lot in the same neighbourhood requires a very short loading screen.

That’s not necessarily a backwards step. The Sims 3 had ambitions to render as big a chunk of the world as possible at any given time, to create a fully simulated community, a society that would tick over in the background even as you were focused on what one individual Sim was having for dinner. With The Sims 4 Maxis has decided to go in the opposite direction, focusing the simulation on what happens inside the skulls of Sims, rather than outside the boundaries of their homes.

We’re back to the simulation of basic routines, managing your Sim’s needs such that they head out to work well rested, scrubbed up and empty bladdered, earning more and more money with which they can buy nicer furniture and bigger houses. They arrive home tired and hungry, with just enough hours in the day to cook a meal and, hopefully, brush up on skills required to advance their careers. Weekends are for socialising and hosting parties.

This is still an incredibly detailed and entertaining life simulation. Dirty plates must be cleaned and put away, bins have to be emptied, toilets are to be unclogged and puddles of urine mopped up. Bad smells in the kitchen impact on Sims’ moods, meals can be shared with friends and romance can be triggered by persistent flirting. Bad cooks burn food, their cooking animation has them dropping salt shakers into pans and nicking their fingers. Good cooks catch knives, flip pans and dance around the kitchen like digital Ainsley Harriotts.

Skills are improved through frequent use, with familiar and satisfying green progress bars appearing above learning Sims’ heads. This is no more apparent than when a Sim is learning to play a musical instrument, their efforts slowly progressing from painfully amateurish piano thumping to effortless, full and moving piano concertos. It’s like a progress bar, except you can hear it.

It’s important, when plainly counting what has and hasn’t made its way from The Sims 3 to The Sims 4, to remember why The Sims is such a compelling game to begin with. This game is still powerfully addictive, with its quick day-night cycles and Monday to Friday job routines somehow unplugging your own internal clock and allowing entire real-world evenings to pass by unnoticed.

The biggest and most touted change here is in the new moods that all Sims carry with them. By default a Sim will feel Fine, though any number of things can trigger a new mood to take over. Having a joke fall flat will result in an Embarrassed mood, reading a book will make a Sim feel Focused, having a brisk shower will leave them Energised.

Each of these moods will result in your Sim having one of a number of desires related to that mood. For example, an Energised Sim will want to jog. An Embarrassed Sim will want to hide under their duvet covers. A Confident Sim will want to pee like a champion or make a new friend. Fulfill these desires and you earn aspiration points which can be spent on rewards.

These rewards are strange things, game-breaking potions that make your sim thin and young, or give them a superhuman trait that means they no longer have to eat or sleep. It’s an odd thing that the game holds these rewards in such high regard, as using them feels self-defeating in the context of playing the game as a proper life simulation. That they’re the end result of fulfilling the desires that a Sim’s mood generates makes the moods system feel a bit redundant.

Sims should grow fat and old and die in front of their fat old husbands and wives. Fulfilling an angry Sim’s desire to kick over a wheelie bin shouldn’t let them chug from the fountain of youth. 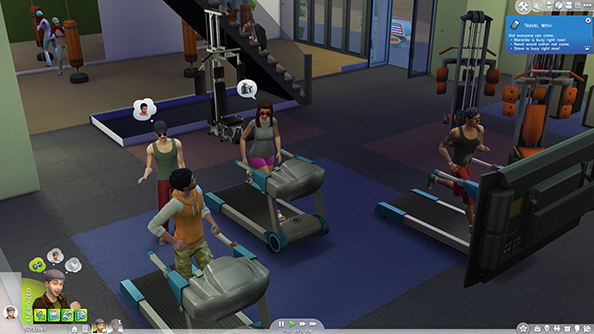 Where moods do enhance the game however is in the range of new interactions each one unlocks, and how those moods affect job performance. If a Sim is feeling Playful for example, they can cook up a batch of gummy bear pancakes. If they’re Energized they can scrub a toilet with added gusto. Even the animations of normal interactions are affected by moods: Sims will cook angrily if they feel like it, smashing pots about, or poop sheepishly following a humiliation. Their voices and facial expressions will change to match their mood.

Your job will assign you two or three objectives to meet before its possible to receive a promotion: namely ranking up in a certain skill or kind of interaction with another Sim. Going to work in a certain mood will increase your chances of rising through the ranks, turning mornings into a matter of washing and feeding your Sim before plonking them in front of a particularly meaningful sculpture to imbue them with, say, a Focused mood.

Multi-tasking makes getting things done even easier. Sims can now carry out a number of actions at once: eating cereal while watching television and having a conversation, for example. Such a tiny change revolutionises the entire atmosphere of the game, especially at parties or in public lots, with Sims now able to socialise properly in proper group conversations.

No longer do Sims have to jarringly interrupt a discussion to pick up a spoon or eat a sandwich, or pull another Sim out of a their previous conversation to tell them a joke, instead the interactions all flow into one fluid action that’s shared between half a dozen people. It’s sort of astonishing that The Sims ever worked any other way. 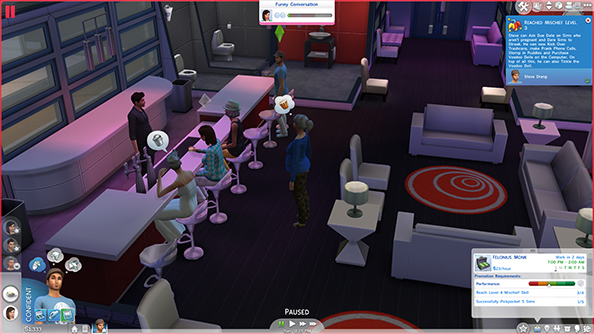 What else. The build mode now allows you to drop entire rooms into a lot before dragging their walls around to reshape them. You can adjust foundations to raise and lower your floors. Objects can be positioned with a little more precision than usual, especially objects placed on the tops of tables and other surfaces. And the Sim creation tools are exponentially more powerful than before, eschewing sliders and instead allowing you to grab cheek bones with your mouse cursor and wrench them all up and down a face like a mad surgeon.

And already the online gallery of user creations is generating some interesting content, such as the cast and set of Friends recreated inside The Sims 4.

That’s all lovely, and will get lovelier, even if this entire venture feels like Maxis have hit a giant reset button and lost a lot of unsaved progress. There are no pools, but there are moods. There are no toddlers, but you can hold a plate of scrambled eggs while asking a neighbour to have sex with you.

It’s better to focus on what The Sims 4 is rather than what it isn’t. The Sims 4 is good, if a bit plain when compared with the exploding circus of colourful content that festoons previous games in the series, expansion packs littered with dogs and ghosts and hobbies and holidays that are now nowhere to be found.

We’re back to a clean sheet, and it’s arguably the cleanest, most stable and most ready-to-be-built upon sheet Maxis have yet laid down.