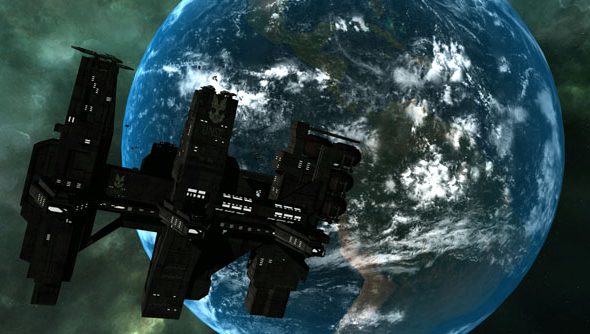 Halo Wars might not have been a swansong befitting the mighty Ensemble Studios, but it did prove an appetite for a high-level game set in Bungie’s curvaceous space-world.

Sins of the Prophets delivers on that same hunger, but in markedly different fashion. Where Halo Wars was all ground assaults and top-down buggies, Prophets is tied to the military, economic, diplomatic and star systems of Sins of a Solar Empire: Rebellion – one of the best strategy games on PC. This is a mod that reduces Master Chief to an indistinguishable green dot on the surface of one planet among many.

The Prophets team packed up version 0.56 of their Halo total conversion for Sins of a Solar Empire: Rebellion v 1.82 yesterday. It’s now ready for public consumption, after seven months of balance tweaking.

Expect comprehensive faction showings from the UNSC, Covenant and the Flood. The latter in particular now act like the virulent parasitic organisms they are, shunning diplomacy in favour of drifting about in new pure form Flood Carriers, ready to “scare the shit out of you”.

“Flood no longer accept bidding for who they are going to attack,” writes modder Unikraken. “Their behavior is now independent of player actions.”

About 30 planets are included in Sins of the Prophets, excluding Forerunner locations. And several of them feature custom textures in accordance with Halo lore: namely Earth, Reach and Sanghelios. Sins’ dramatically scaled stars will surely be a perfect fit for the undulating, signature look of classic Halo.

And the final touch?

“We liked our main menu so much we put a ring on it,” says Unikraken.

Do you reckon you’ll give this a go? You can download Prophets at ModDB.Sins of a Solar Empire: Rebellion is still pretty steep on Steam, but better value in a four-pack.