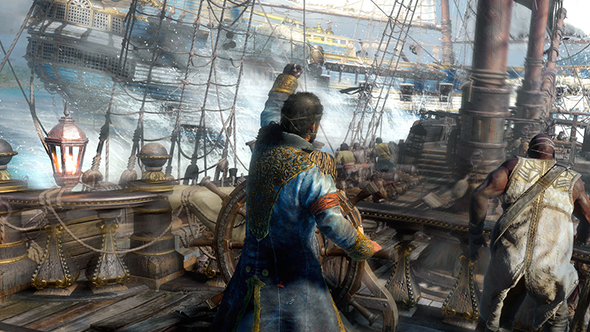 Ubisoft’s financial report today revealed that the release date for Skull & Bones has been delayed back a bit. The ship combat game had initially been scheduled for this fiscal year, but has now been delayed to the next fiscal year – meaning you should expect it somewhere between April 2019 and March 2020.

We haven’t heard a whole lot about Skull & Bones since its debut at E3 last year, where it showed up as a standalone take on the Assassin’s Creed ship combat spun out into a expanded product with an array of single-player and multiplayer options. It was initially announced for release in autumn 2018, but that’s obviously no longer happening.

Dig into the best PC games.

In their financial report, Ubisoft say that they’ve given themselves “more time to develop Skull & Bones to offer players an even more engaging experience.” They say that extra time has been afforded by strong performance from new releases and back catalog titles, as well as the “acceleration of our digital transformation” – meaning that their digital sales are doing quite well.

Still, the Skull & Bones delay means that Ubisoft have cut their unit sales projections from 23 million units to 19 millions units. If you’re challenged by simple subtraction, that means they were hoping for four million copies of Skull & Bones sold – a reasonably confident projection for an original game sailing into uncharted waters.

Even with the delay, you should expect to hear more on Skull & Bones at Ubisoft’s E3 conference, which takes place on June 11. We know we’ll also find out much more about The Division 2 and an unannounced new sequel at the show.