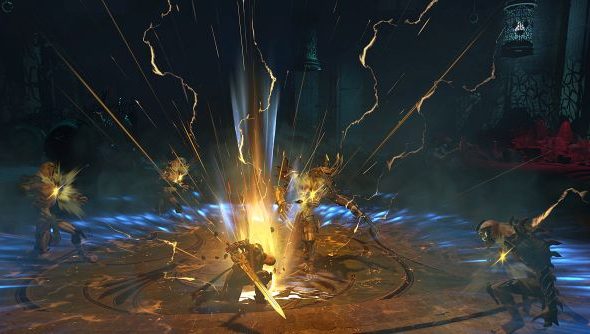 I had no idea what to expect when I first booted up Skyforge, Allods Team’s follow-up to their namesake, Allods Online, brought to the west by Obsidian Entertainment and My.com. Not least because that’s quite the collection of developers spanning a pair of continents with incredibly different player bases. Obsidian’s name is the obvious attraction, interest piqued by wanting to see how much influence the classically single-player-only developer has had on this creation.

If you’re looking for something else to play for free, here’s our pick of the best.

Turns out it has far more to offer than that. Triple-A shine was the first thing that stuck out. Even when running on a modest graphics card, it’s visually impressive. While the fidelity stretches nicely into whatever horrendous mix of resolution and anti-aliasing you can handle, it’s thanks to the art style that it sticks about. An intriguing mix of science fiction and fantasy, human-sized claymores blend easily into holograms, robots and laser beams. It exudes confidence, fully aware of how relentlessly silly its hyper-tech gods and invading alien species are next to the planet’s wild dogs and over-eager plantlife. 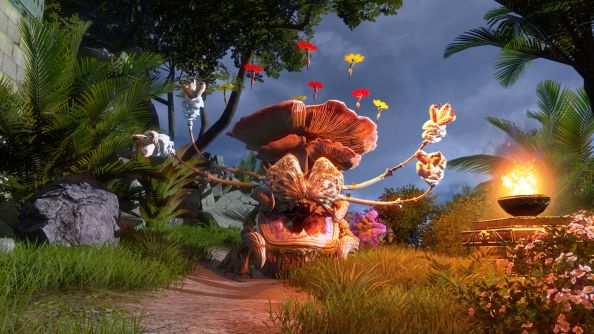 It’s also willing to throw you straight into this world-threatening story without a hint of hesitation. The absolute minimal amount of set-up is done before giving you control of your character. You don’t get to decide any cosmetic options or mechanical specialities before killing off a few monsters and starting the storyline – it thrusts you straight into the action, shows you the ropes, then once you’ve developed a playstyle and preference gives you an eyebrow slider and role choices.

This is all powered by the incredibly freeform Ascension Atlas that allows classes to be developed over time and switched on the fly. Once you finish the opening, Skyforge gives you access to three: the Paladin, Cryomancer and Lightbinder, which fit broadly into the categories of tank, DPS and healer. Rather than a permanent decision, being out of combat for a few seconds is all that is required to switch between them.

They have their own progression paths, utilising Sparks that drop from enemies and are rewarded for quests to unlock new nodes. Most of these are stat boosts, but every so often a new ability will be unlocked, or a talent that gives other skills new properties. Each starts as a linear path, then opens up once you’ve learned the class’ ultimate ability. There’ll be multiple routes to take, letting you prioritise, for example, either defensive or offensive play within the Paladin. 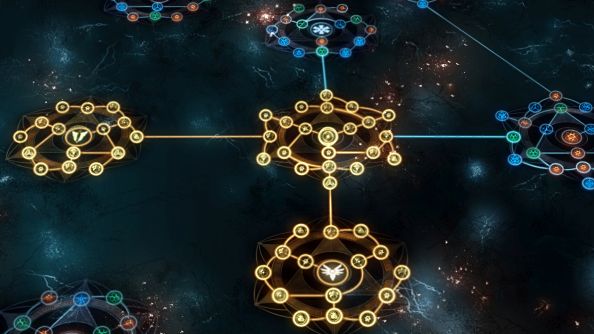 At this point the type of resource needed to advance changes, becoming specific to that class and available from different sources. This frees up the previous Sparks to be used on other classes, letting you multitask more easily. Initially, I thought that was the only use for them, and noticed my progression slowing, assuming that I had reached the point where free to play wouldn’t cut it, the trap would close and the grindfest would begin.

Then I noticed the entire other section of the Atlas that governs character progression, rather than class. This unlocks at the same time as the ultimate ability, but I had missed it, preferring to focus on improving the Paladin rather than looking elsewhere. Here you move around much larger nodes, with far more options. It’s massive, laid out like a humongous FFX sphere grid with many more open paths. Dotted far from your starting position are new class nodes, letting you push towards an entirely new playstyle or ignore them completely in favour of buffing stats and unlocking general abilities.

If anything it might be too big. It’s intimidating to look across it and make a decision on which class you want to aim for. You can trial each, and even get a small reward for every new one, but there’s a big difference between that five minute tutorial and what is a commitment to dozens of hours. It would be nice to see a way to take them ‘into the field’ in an early zone so as to actually get a grasp on how they move around the battlefield and combo their abilities.

Part of the reason this is a problem is the excellent nature of Skyforge’s combat. It’s the hotkey system you’re likely familiar with, but far more action- and positioning-orientated. The only similarities between classes are which buttons initiate attacks – though some have far more skills than others – and access to dashes in any direction. Beyond that you’ll be doing everything from managing different ammo types as the Gunner, to building and using resources with the Paladin’s sequential skills, to juggling debuffs on your target as the Alchemist. Meanwhile the movement system allows for more interesting enemy attacks that must be dodged or approached in different ways. 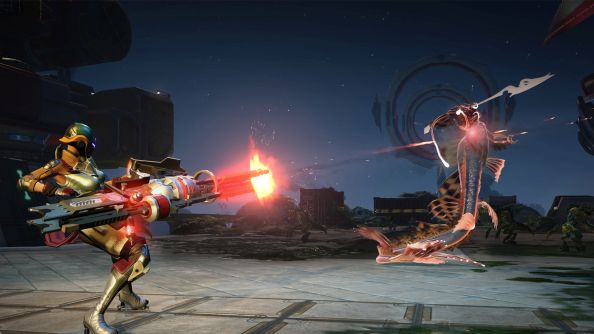 With this you quest through a combination of instanced, linear areas and massive open zones. The former are called squad challenges, and can be done either solo or with up to three players. They usually tell a story of an invaded port, compromised robotics facility, occupied town or otherwise stricken area. They’re quick, vary nicely between large bosses with packs of mobs sprinkled in between and have challenges to complete when you inevitably have to re-run.

The open zones are more interesting. Each is a large area that will take a couple of hours to finish, with new quests popping up as you cross it, along with a storyline running from start to end. You’re usually battling against one or two specific factions when completing these, and it gives the game a much needed sense of place. Every mission you start is linked only to the others by the lore – you’re teleported in from the giant floating city the gods and immortals call home. It’s an unfortunate side effect of always being able to get into new areas quickly and having a true hub.

It’s not helped by the plot which is, at best, rudimentary. The tale of a fallen god who maybe isn’t all he seems to be is just on the right side of clichéd to be recognisable and inoffensive, but the way it’s told is poor. The writing isn’t up to snuff, the voice acting is basic – it’s got all the hallmarks of a translated project. With a world as wonderfully unique as this, it’s less of an issue, plus the plot is hardly central to my enjoyment of any MMO. But it is a part of what keeps me pushing forward, a safety net for when exploration or character progression aren’t cutting it.

The simplicity of that progression may be Skyforge’s oddest feature. Each character – you have only one per account, as all classes being available at any time rather removes the need for alts – has a Prestige number. It’s governed by your gear and your unlocked nodes in the Ascension Atlas. It gates your access to areas, unlocking different locations to warp to when you reach specific milestones. I’m on around 2000 now, with the upper limit I’ve seen being in the very high five figures. 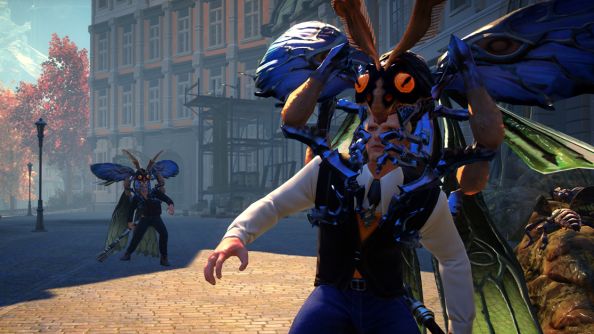 It’s a double-edged sword. You can see at a glance, no matter how far into endgame you get, which players have spent more time and effort on the game than you have. That’s good, and removes the need for item levels at max, or indeed levels of any kind. It’s also a supporting strut of the marvellous class system. Unfortunately, it also incentivises some annoying behaviour. The Number (capitalisation writer’s own) can’t take into account special effects, but you’re constantly pushed to make it higher at any cost. This means that picking up items with an extra Prestige or two but of a lower rarity is a dichotomy between the game constantly telling you it’s better, and rewarding you as such, versus knowing you’re doing less damage, or having less fun, as a result. I can also see an endgame problem coming, where having a Number that comes from a lot of multi-classing makes you a far worse character to take along for a high-level party quest than one who raised their Number in, for example, nothing but tank skills.

Overall, I know I’ve barely scratched the surface of Skyforge. The handy progression guide, always pointing me at a new thing to unlock, informs me I’m thousands of Prestige away from the challenges – and frustrations, if what I’ve heard from higher level players is accurate – of Godhood. However, I enjoy it, and it was and will continue to be a perfect MMO for the short spurts I like to play them in. I never felt the pressure to pay for anything over the first dozen or more hours. You even get three days of the Premium mode free, to take it or leave it as a subscription. It costs you nothing to give it a shotand I think you won’t be disappointed.