When Darksiders art director and graphic novelist John Mueller sat down with coder Jeff Johnson and animator Sam Gage to prototype Bedlam, he went analogue. The nascent Skyshine constructed a physical board game, and played it for hours and hours.

“They had all these rules for different classes,” recalls associate producer Seth McNitt. “A kind of chess meets rock, paper, scissors thing. And then as we were developing they started saying, ‘Maybe we need to make them a little bit closer to each other? A little more playable.’”

In fact, the finished game released today on Steam almost exactly mimics those board game mechanics. The trio had developed an alluring balance of trade-offs: nail-biting choices that crop up over the course of quick turn-based tactical battles. In the digital game those battles are played out during FTL-style journeys across a wasteland, in the back of probably the largest Armoured Personnel Vehicle ever conceived.

The armour-plated, weapon-laden dozer is built and operated by the last of a guild of god-engineers: The Mechanics. It just so happens that your Mechanic also knows the location of the majestic Aztec City – the only place that promises something resembling the good life in Bedlam’s blasted wastes.

A three or four hour Bedlam campaign finds you guiding the dozer and its population of passengers across the desert to the mythical metropolis. Terrain is split into territories guarded by one of four hostile factions – marauders, mutants, AI and cyborgs – whose respective reach is determined when a new campaign map is generated.

There’s always a choice to be made about your next step – a border crossing into marauder territory, maybe, or an on-foot trek towards a point of interest – and a time and resource cost associated with each. You can upgrade your dozer with found power cells to improve fuel consumption, crew heal rate, and the speed your people get through their supply of steak.

“Especially early in the game, even on Normal, that stuff will drain really quickly,” warns McNitt.

While you’ll eventually reach your mirage-like goal, there’ll be plenty of little stories dotted along your chosen route. But the longer you spend faffing about Bedlam, the more annoyance will begin to bubble in the belly of a malevolent force living among the dunes. 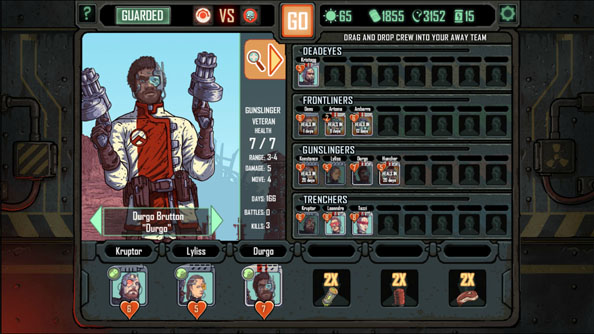 “King Viscera is the main asshole that’s out there in the wasteland,” informs McNitt. “The more he’s ticked off and aware of your presence, the more guys he’s sending.”

You can bulk up your own mobile militia (the van-guard, if you will) by recruiting troops in conversation events – and by defeating and impressing particularly powerful characters named Elites. It only takes three kills for a soldier to rank up to veteran level – which should give you an idea about how quickly permadeath comes into play.

“We played with it a lot: ‘Oh, maybe it should be four kills, five kills, maybe it’s too easy,’” says McNitt. “But it’s really hard to keep your veterans alive in the first place.”

Counterintuitively, you’ll want to swap veterans out from your active roster to train up more – to tackle groups of enemies in double figures.

There’s a more explicit and gamey risk-reward decision to be made, too: the fewer troopers you bring into battle, the higher the multiplier boosting your rewards if you win. But you’ve got to have enough firepower behind you to succeed. 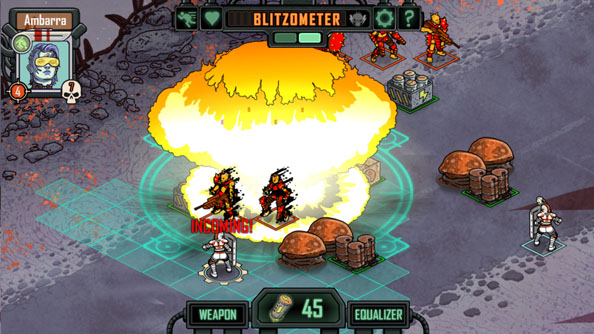 See a screenshot of a Bedlam battle and one faction might seem to have a distinct numbers advantage over another – but they’re rarely so overpowered as they appear. Every turn, each side is beholden to a strict, two-action limit. Bring four men to a 14-mutant fight, and you’ll wind up far more active.

Each fighter has a class, which is where the (sand-beaten) rock, (yellowed) paper, (rusty) scissors comes in. The Frontliner can stride long distances and take a beating, but isn’t packing much in the way of damage. “Basically opposite” is the Deadeye – near-immobile, almost always imperiled by low health, but deadly in an opportune moment.

The Trencher and Gunslinger have their own quirks – and you’ll find that every specialisation is balanced to bowl over one of its counterparts but buckle against another.

An on-screen blitzometer creeps up just a little after every turn. That’s not so ominous in smaller skirmishes that wrap up before it’s filled – but in larger scraps, players will wind up facing enemies with double the number of actions per turn.

“If they have a shotgunner, in one turn with four actions they can basically kill three of your guys,” says McNitt. 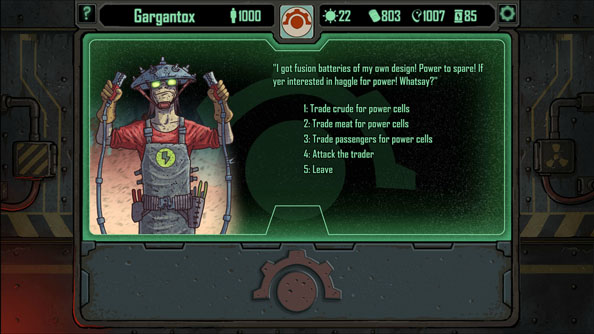 Those taut, two-action turns can render battles pretty puzzly – thanks to resources dotted about the battlefield and the special abilities of opposing factions that come into play. Mutants absorb a little radioactive health every turn, and so become dangerously beefy when faced in large numbers. AI can teleport at will about the battlefield – leaving long-ranged deadeyes and gunslingers your best bet.

Marauders, meanwhile, throw grenades that sit on the grids during your turn and explode the next, necessitating a desperate dance to dodge out of the way. You’re often forced to choose between movement and attacks, fighting for a second’s space to shoot back.

But you can force your enemy’s hand in the same way. You might have a character one shot away from death, but find a way to engineer the situation so that your opponent has no choice but to respond to a more pressing threat first.

And there are in-built limitations to enemy behaviour that Skyshine hope players will take advantage of – the deliberate dumbness that can see enemies shoot the frontliner you’ve walked in front of a weaker comrade as a “meat shield”. 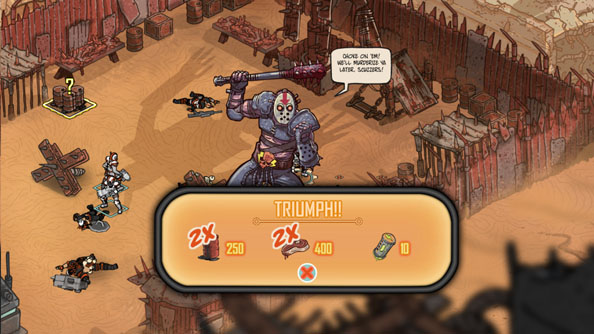 If Bedlam’s design feels honed and refined, there’s a reason. Mueller and Dave Davis, Skyshine’s lore master, grew up in the ‘80s playing D&D. Bedlam really began as their own childhood variant: Dungeons & Dragons: Road Warrior Outer Space Type Game. Over the course of years, they dreamed up characters and places informed by the ‘80s cartoons, Dredd comics and Max Max movies spinning around their young brains.

“It’s really funny,” laughs McNitt. “Here they are in their 40s now and they’re like, ‘Hey, should we make that game?’”