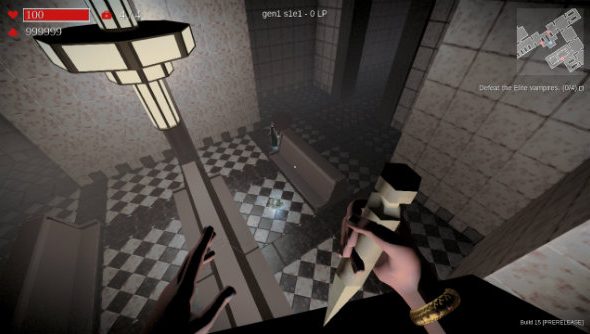 I’ve been wanting an immersive sim set within vampire fiction since Vampire – The Masquerade: Bloodlines sunk its teeth into my neck, and now one’s coming from the creators of indie immersive sims Eldrich and Neon Struct.

For more small studio goodness, have a look at our list of the best indie games.

Slayer Shock is described as a “role-playing shooter about hunting vampires in Nebraska”. From your college coffee shop headquarters, you take on missions patrolling the streets, rescuing human captives and weakening the undead threat.

You’re helped along by a team of vampire slayers who operate out of your base, the place where you can pick up new weapons and skills, as well as researching new ways to deal with the fanged threat.

Minor Key Games describe Slayer Shock as a spiritual successor to Eldrich, “in its generated worlds and its immersive simmy blend of stealth, combat, and player choices”, though this one won’t be a roguelike.

There have also been a bunch of technical advancements since Edlrich, including replacing its voxel world with a mesh-based one and rewriting the entire procedural generation pipeline. There’s also been a bunch of work put into making sure the game feels like a campaign and it will track the persistent status of the player, your allies and your enemies.

The game has been in development since November 2014 and Minor Key are hoping to have it out by the end of this year. There’s a bunch of fascinating insight over on the dev blog, and there’s a really interesting personal developer blog about how professional wrestling influenced Slayer Shock’s design.