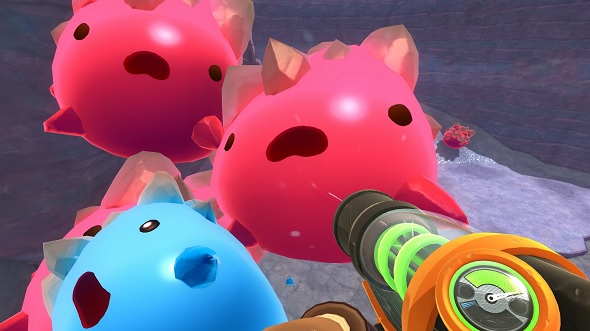 Beatrix LeBeau has the right idea. She decides to leave Earth behind to start a new life on a planet far, far away, making a living by farming slimes. We could all do with escaping this planet every now and then, and the game Slime Rancher – of which LeBeau is the star – lets us do just that.

The idea in Slime Rancher is simple: catch slimes, put them in pens, make money from their poop – known as Plort. Make more money to buy new equipment and bigger pens so that you can catch bigger and trickier-to-handle slime creatures, and keep going from there. See, pretty simple.

But the methods by which you approach trying to achieve this endless cycle of slime-filled progress vary. You can go the most obvious route as outlined above – catching slimes, feeding them each morning, collecting poop – or you could challenge yourself and try to get through the game as a vegan. Whatever floats your boat.

Whatever method you do go for, though, what’s guaranteed is an experience that’s both cute and full of small surprises. It’s what has kept Slime Rancher so popular even during its Early Access phase on Steam. Now that it’s released you should surely be looking to get the game yourself. Go on then, throw your money at it…

But wait, if you’d rather save some pennies, we’re giving away ten copies of Slime Rancher. All you have to do to be in with a chance of winning one of them is to enter our giveaway via the widget below.Every action you complete is worth one entry into the giveaway, and the more actions you complete the more chance you’ll have of winning. We’ll also need your email address so we can send you a code upon winning – we won’t send you spam, we promise!