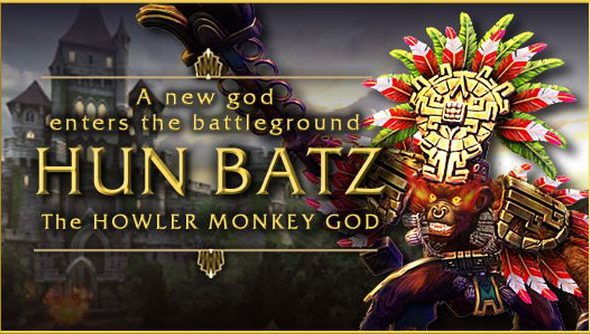 Videogames have a real problem with naming things sometimes. ‘Hun Batz’ is the latest hero for SMITE, the third person free-to-play MOBA-action keyboard-destroyer, and is easily the oddest name for a character in a fantasy game I’ve heard. Hun Batz replaces Sun Wukong, who was removed for a revamp. In any case, a soothing lady narrates HUN BATZ’s announcement video. She is so soothing I feel a bit sleepy now. I might actually use the Hun Batz announcement video as some sort of bed time storyesque sleeping aid.

HUN BATZ is a melee assassin monkey god, who has a very long back story including some half-brother twins (?) and a football match gone wrong and a tree that is very tall and kept getting taller and then they accidentally use their belts like tails (?) and then Hun Batz and his brother TURN INTO MONKEYS. I don’t know what happened to the other brother, but anyway Hun Batz is a new god in SMITE.

According to the SMITE patch notes, those players that owned previous god Sun Wukong or any Sun Wukong skin will now own Hun Batz and/or the skin equivalent.Players have access to an initial set of playable gods for free, while additional gods are unlocked through gameplay time or more quickly through micro-transactions, so Hun Batz can be purchased if you fancy meleeing someone with his fancy Mayan staff.

Here is the extremely calming video, which would hypnotise even the most fervent MOBA hater:

I recommend combining that soporific video with this one just before bed:

Infused Strikes (Passive): Using an ability gives Hun Batz’s next basic attack within the next 5 seconds additional physical damage. The effect can only apply once every 2 seconds. Damage: 25 (+20% of your physical power).

Patch notes here. Off for a nap.

Incidentally, what is your favourite weird name for a fantasy character in a game? There must be some crackers out there.