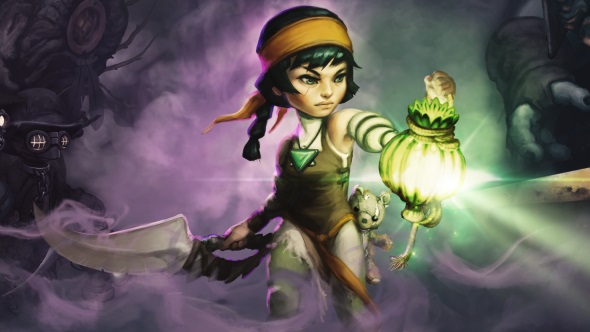 Smoke and Sacrifice features something I have not witnessed in real life or in videogames before: giant jellyfish having sex. The two lovers slither around each other, presumably checking off the Giant Jellyfish Mating Ritual tick-box list in their minds, before engaging in the act. It is a swift affair, decorated by swirling love hearts, and concludes with the instantaneous birth of a fully-grown jellyfish. While the new arrival is good news for the proud parents, it is bad news for me: the population of my enemies just increased by one.

Fight tooth and nail to stay alive in the best survival games on PC.

Smoke and Sacrifice’s open-world is home to overlapping ecosystems. Creatures seek out food, defend their territory, and breed to increase their numbers. If you were to stand still in one of the game’s many beautiful biomes, you would see life bloom and prosper around you. A colossal crow that appears to be Big Bird via Stranger Things’ Upside Down fiercely protects its young, while the aforementioned jellyfish peacefully coexist with a group of hedgehogs that are more hog than hedge. The same level of ecological simulation applies to the world’s bizarre fauna and insects to create a genuine sense of life around you. This is a world that lives and changes, reacting to itself as much as it does to you. 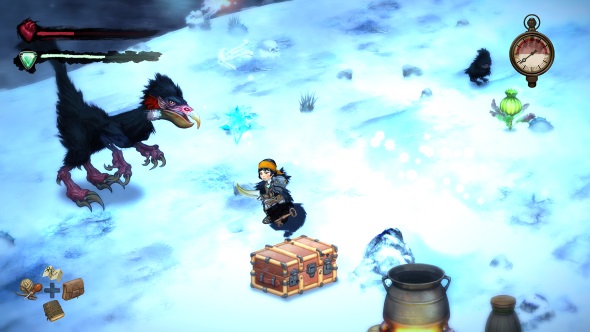 You, in this case, are Sachi – a mother in search of her missing child in a world that is the meeting point between Klei’s unforgiving survival sim Don’t Starve and Nintendo’s liberating RPG The Legend of Zelda: Breath of the Wild. Like the former, Smoke and Sacrifice is a hand-drawn, kinda isometric game with an emphasis on collecting, experimenting, and crafting. But it is the latter’s elements that really make it compelling.

Rather than being a survival game with no clear goal other than staying alive, Smoke and Sacrifice has a story to progress through, with crafted moments living alongside the emergent stories provided by the world. There is a mystery to be solved, and you will need the help of a strange, twisted collective of characters to get to the bottom of it. They will offer new items that help you access new areas of the world, such as furry boots that allow you to traverse a field of ice. 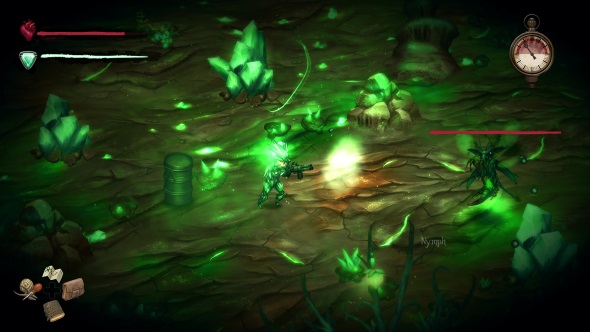 The search for the answers to Sachi’s questions take you away from the safety of her home and into a secret underground world plagued by mysterious smoke. This thick, suffocating gas spreads across the land for half an in-game day, bringing nightmarish changes with it. Some creatures become more hostile, changing their attack patterns and proving a more difficult challenge in combat. Skeletal ghosts lurk among the rolling dark clouds, preying on those not observant enough to notice their glowing eye sockets. Surviving the smoke requires the vigilant use of a lantern, the light of which repels the gas and prevents you from slowly choking to death.

The lantern is the first of an expansive collection of items that can be crafted. It is also a valuable lesson in Smoke and Sacrifice’s harsh-but-fair gameplay loop; not only do you need to gather the items required to build it, but the lantern requires constant maintenance. It is powered by fireflies, since you asked, which can be caught with a net. The fireflies eventually wither so you will need to keep a small stockpile of them handy at all times in order to keep the lantern operational. Similarly, the net gradually deteriorates, and you will need to gather the sticky tendrils of jellyfish to keep it intact. Your life depends on a functional lantern, which in turn depends on fireflies caught with the net, which then depends on the continued gathering of jellyfish limbs – you get the idea. This little loop is just one of many in the larger tapestry of Smoke and Sacrifice’s world. 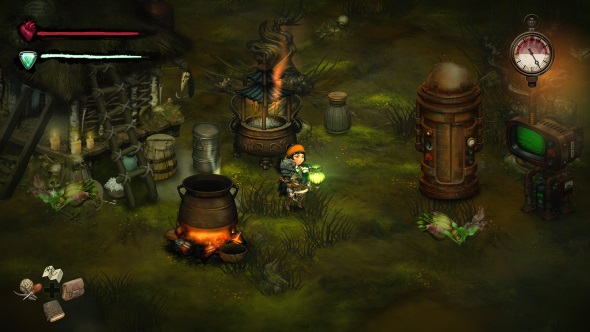 And what a world it is. A fusion of Victorian gothic, steampunk, and dark fantasy, the land is decorated with gnarly, wide-trunked trees, brass pipe networks finished with glowing Edison bulbs, and inhabitants outfitted with bowler hats and plague masks. The presentation of it all certainly takes cues from Don’t Starve but the art itself has an identity all of its own. It is layered with intrigue – the mashup of steampowered and digital technology providing as many questions as it does opportunities to admire it. Exploring it is a delight, and the deeply ingrained nature of its survival and gathering mechanics means it is beneficial to scour every inch of its alluring biomes.

Developers Solar Sail Games plan to release Smoke and Sacrifice this year. Based on the hour-long demo I have played, it has shot straight to the top of the indies I am most excited about in 2018. So far, it strikes an ideal balance between narrative momentum and freeform exploration, with plenty of encouragement to seek out and experiment with strange new materials. If it maintains the same sense of wonder over the dozens of hours that Solar Sail promise then Smoke and Sacrifice stands a chance of being this year’s indie game to discuss around the (hopefully jellyfish-free) water cooler.