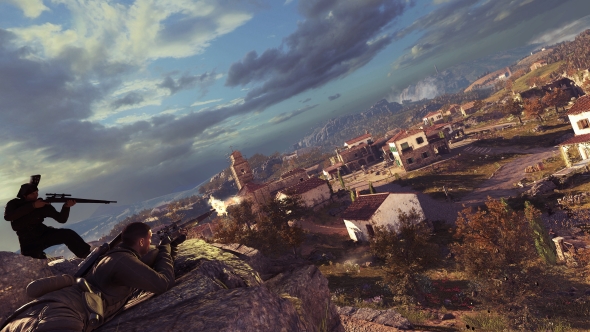 Rebellion have carved out an interesting little niche with their collection of ball-blasting sharpshooter games, and Sniper Elite 4 continues to expand and improve on the formula. With each title that’s gone by it’s felt like Rebellion has built Sniper Elite up to its true potential, and the upcoming fourth game finally feels like the game it’s always meant to be: a free-form stealth shooter.

Want to shoot the wings off a fly at 300 yards? Try one of the PC’s best sniper games.

Recently PCGamesN received an intelligence briefing explaining that there would be an opportunity to infiltrate Rebellion headquarters in Oxford, England, in order to spy on a build of Sniper Elite 4. Accepting the mission, I snuck aboard a north easterly-bound train (with ticket in hand, should guards be on duty) and travelled towards my target. Upon reaching Oxford, I proceeded to play the game for a few hours. Please find my impressions and detailed findings below. 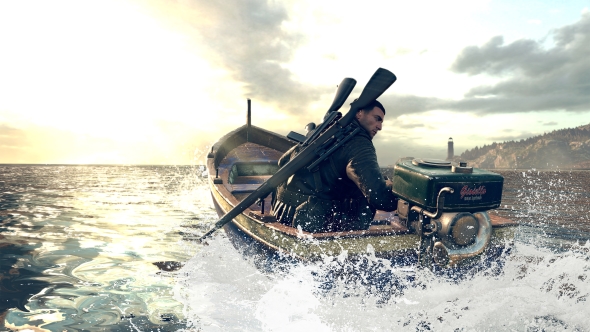 My hands-on session with Sniper Elite 4 places me on the island of San Celini, Italy. It’s 1943, and the small rock has been evacuated by the Nazis, leaving just German soldiers prowling its grassy, picturesque surface. The area is untouched by artillery or bombing, meaning the houses retain their gorgeous, farm-like architecture. Rather than hiding in rubble, player character Karl Fairburne makes use of bushes and buildings to keep out of sight.

San Celini is a wide open environment covering thousands of square meters, dotted with three objectives; destroy some propaganda cameras, kill three Nazi officers, and assassinate General Schmidt. The latter is the only mandatory mission, and none of the three tasks have compulsory methods. How you go about these objectives, and in what order you do them, is up to you.

The initial feeling is one very much of IO’s Hitman. You’re the freedom to explore a large yet confined area, learning of its hidden sniper nests and secret stashes, and evaluating what the best method of approach is. But while Hitman emphasises blending in, Sniper Elite 4 sticks to a more classic stealth formula. Being spotted attracts enemies, who will attempt to triangulate your position based on the sound of your gun. It makes traversal through the world one of considered sprints and breath-held hiding. Combined with the military flavour, Sniper Elite 4’s closest relative is actually Metal Gear Solid V.

The openness of the mission map allows Sniper Elite to have a refreshed focus on experimentation. You can play as a silent assassin – masking shots fired from your bell tower nest with the noise of planes passing overhead – or simply click on head after head until your magazine is empty and everyone’s a mess of shattered bone and leaking fluids.

It’s also easier to get into position now; the ability to mantle most ledges or climb up posts means achieving the necessary elevation for a long-distance shot is often possible now. It’s not Tomb Raider by any means, but the added verticality is desperately welcome.

But there’s far more in Fairburne’s toolkit than a scoped rifle, though, and it’s all tailored to make Sniper Elite 4 a broad, inventive killing sandbox.

Everything can be used in two ways 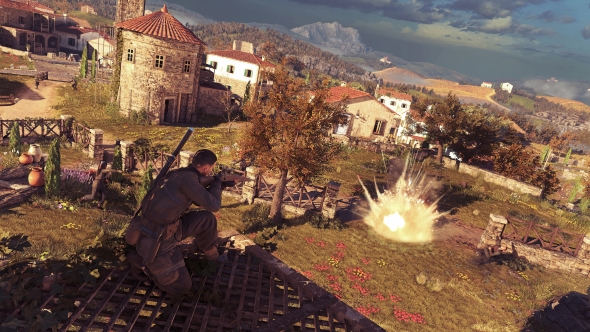 You’ve always had access to a variety of tools in the series, be that pistols, grenades, or trip-mines, but this fourth entry takes things several steps forward. Every item can be used in two ways. Sniper rifles, for example, can be loaded with normal rounds or suppressed bullets, which fire silently at the cost of having more dramatic drop-off. Your distraction tool can be cycled between a rock, which is thrown to encourage an enemy to investigate a specific area, or a whistle which is blown to attract them towards you.

On the more complicated end of the scale, the landmine can be set to detonate after one press or two. It sounds a redundant idea, but in practice it really works. A single press will see it explode the moment it’s stood on; great for a single enemy. However, place it in a doorway and set it to two presses, and the result is far more effective against a crowd. Soldier one runs through the door and presses it once, followed by soldier two whose footstep activates the second press. The mine explodes, instantly taking out soldier two, but the radius also kills soldier one (now in the room) and soldier three (who was just about to enter the room).

It’s not all thousand-yard sharpshooting 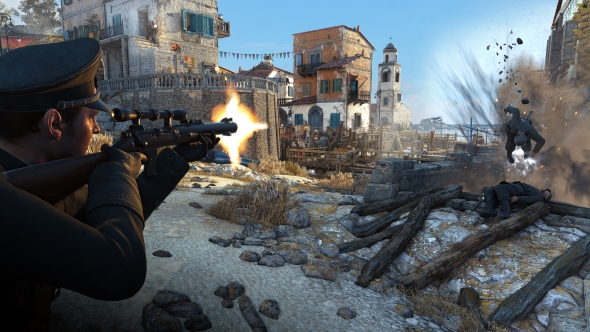 As the title would suggest, Sniper Elite /is/ a game with heavy emphasis on the sniping. Long range kills are where you’ll undoubtedly achieve the most satisfaction. Each successful shot provides and on-screen record of the distance between you and your kill, and it’s fun to try and beat your personal best. Distance shots also continue to trigger the series’ trademark gory X-Ray kill cam, following a spinning bullet in slow motion as it drills through flesh and bone. Despite still lacking in taste, it’s a feature that remains an oddly satisfying novelty.

There’s plenty of chance to experiment with range, though. Thanks to the multitude of weapons and gadgets in Karl’s incredibly deep pockets, you could happily play Sniper Elite 4 as an incredibly close-up murder simulator using just knives, pistols, and the odd explosive. And while that’s been true of the last couple of games (you’ve always had an SMG slung on your back), the open environments and increased tool set seems to actively encourage finding alternate ways to dabble in your wet work.

If close-up is how you like it, Sniper Elite 4 has a multiplayer mode designed for you, too. You’ve almost certainly played something like Control before; a red vs blue battle where objectives drop onto the map and teams have to wrestle for control of it. If you’re familiar with Star Wars: Battlefront’s Drop Zone mode, you’ll know exactly what to do here.

The thing about Control is that it requires a very different approach than the campaign. While marksman is still a valid role, especially when an objective has been caught and attackers need to be fended off, it’s a mode that naturally requires faster moving soldiers. It doesn’t suddenly become Call of Duty, but it flexes Sniper Elite 4’s third-person shooter muscles. And while running and gunning with an MP-44 rarely provides the standout moments that a considered shot from a scoped rifle does, there’s nothing to grumble about when it comes to the game’s cover shooter credentials.

Be a spotter and sniper team in co-op 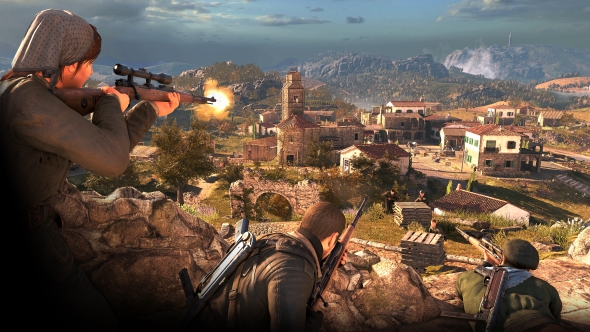 If you prefer your multiplayer a little closer to the core Sniper Elite formula, then Survival may grab your attention. Akin to the main co-operative campaign, the mode teams you up with fellow Allied soldiers to take down the Nazis. But rather than stalk them through castles and bushes, in Survival the bad guys come to you. Yes, it’s a horde mode, and it functions exactly how you’d expect.

It’s somewhat disappointing that there’s not a unique Sniper Elite spin on the well-worn format, but that doesn’t stop it from being a welcome addition to the package. It’s a game type that clearly suits the series’ strengths, allowing you to snipe incoming soldiers and swap out to SMGs and grenades when they get a little too close. I can foresee it becoming the personal challenge of co-op pairs who’ve mastered the campaign and need something more aggressive to challenge them. But, like the other multiplayer modes we’ve across the series, it feels like no matter how solidly they’re designed they’ll always play second fiddle to the murder sandbox that is the campaign.

Sniper Elite has slowly evolved over four games, providing increasingly more freedom with each title. Sniper Elite 4, unlike its predecessor, doesn’t have to deal with the limiting specs of the seventh console generation, and this has allowed it to become the type of game it feels like it has always been heading towards. Provided subsequent missions maintain the freedom of San Celini and offer consistent variety with objectives and environments, Rebellion will have created the sniping challenge you’d been hungry for.

Ready to zero in on the space between a Nazi’s eyes? Sniper Elite 4 will be ready to take the shot on 14th February.