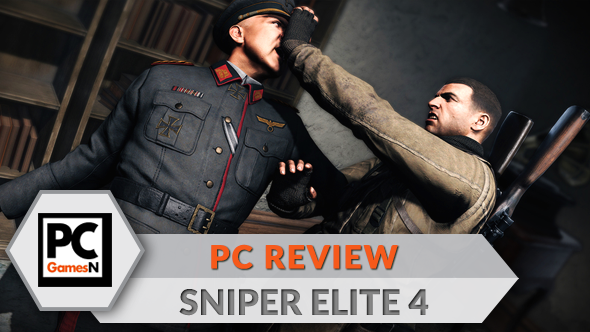 Spoiler: the latest Sniper Elite is still very good at nut shots. Hell, it’s amazing at them. If all you want from a game is sweet, sweet testicular violence, this is the Citizen Kane of virtual crotch cruelty. The series’ trademark X-Ray kills are as giddily, grossly thrilling as ever, and they remain the highlight of this thoroughly silly, unapologetically B title stealth shooter. Is Rebellion’s scrappy marksman going to trouble Metal Gear Solid 5? Absolutely not. Then again, I can’t ever remember Snake making a Nazi’s liver implode from 400m away with organ-shattering bullets.

Hungry for even more sneaky slaughter? Then check out the best stealth games on PC.

While others shooters like Call Of Duty blast off into the stratosphere, Sniper Elite 4 is still perfectly happy to facilitate all your Third Reich-thrashing fantasies. As such, the fourth entry continues with the World War II setting, picking up pretty much immediately after the events of the last game. This time though, the campaign whisks you away from North Africa, instead taking place in southern Italy in 1943, as the returning Karl Fairburne assists the Partisan resistance in ending the region’s Nazi regime.

Speaking of Mr Fairburne, dear lord is he ever a man’s man. The impeccable jawline. The short back-and-sides you can set your watch to. His unimpeachable sense of purpose that the war can be won one cracked pelvis at a time. With the X-Ray kill cam system now expanded to include melee and stealth deaths, Fairburne also gets a chance to show off his devastating knee strikes. Clearly, the rugged American has stolen some of Wolverine’s adamantium, then had the indestructible metal grafted to his joints… 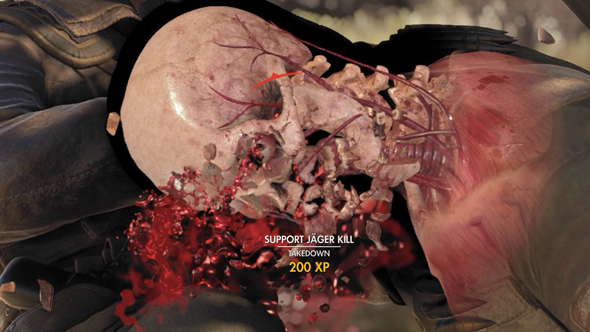 Sniper Elite’s continued flare for ludicrous brutality shows no sign of abating. This is a very, very good thing. Despite all eight levels playing out in slightly one-note fashion, I was never once bored throughout the seven hours it takes to polish off the campaign. That’s because X-Ray kills are never anything short of a life-affirming jolt of joy. Sniping a dude’s jaw and watching in disgusted delight as his teeth shatter and fly about his mouth like obliterated enamel pinballs. Carefully lining up a shot with your Mosin-Nagant M91/30 so the bullet penetrates not only a German rifleman’s larynx, but the throat of the commander standing behind him, too. Or my personal fave, peircing a Nazi’s eyeball, then watching the poor freedom-hating peeper splatter like a squashed cherry. Sniper Elite 4’s talent for varied, gleefully over-the-top violence never gets old.

The brief, barbaric campaign is further aided by the series’ largest maps yet. Last time out, Sniper Elite 3’s mini sandboxes felt just that: a little boxy. But here there’s a real sense of scope to your surroundings. Whether it’s a multi-assassination played out among the idyllic, sun-dappled coastal fields of San Celini Island – a location which immediately recalls Hitman’s wonderful, wicked Sapienza hit – or blowing up a train carrying munitions in the dense forests surrounding the Regolino Viaduct, each map feels pleasingly fleshed out and alive with possibility. 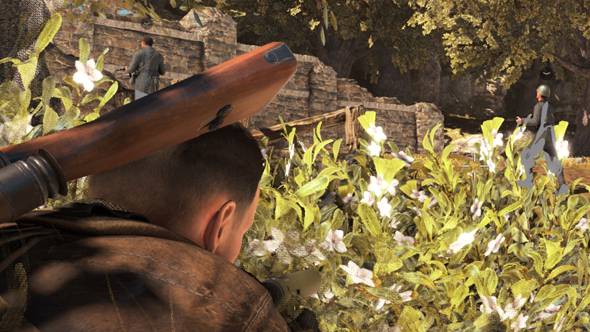 There are more side activities than ever before, and this further encourages you to temporarily abandon those A to B long range hits in favour of sniping the hell out of an optional target at C. It’s testament to the core thrills of lining up baddies in your sights, then watching their skulls disintegrate in deeply satisfying slow-mo that I completed almost every one of these over the course of the campaign. Sure, they all roughly revolve around the same few activities – find secret Nazi documents/whack nasty Nazi commander/blow up Nazi mounted guns – but there’s real satisfaction in ticking these objectives off as you naturally explore the length and breadth of the open environments.

That’s not to say map design is universally great. Enter the game’s fifth mission: Abrunza Monastery. I’m not quite sure how long it took me to find the Nazi-collaborating Mafia capo on this level’s labyrinthine hilltop churchyard. I just know it was daytime when I started the hunt, and dark as my cynical Scottish soul when I finally looked out of the window upon finding the corrupt wiseguy cowering in a horribly obscured cellar. Indeed, I got lost several times throughout the campaign due to the slightly misleading minimap. 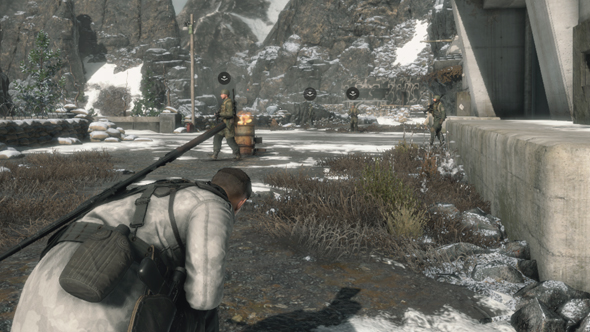 Even when levels layouts are confusing, the strength of the sniping rarely falters. Toying with Nazis from hundreds of metres away provides constant cat-and-mouse excitement, and the simple, methodical joy of marking any enemies in your sightline then silently murdering them from afar one by one is reminiscent of clearing out encampments with Far Cry 4’s excellent stealth system.

Cutely, the longer you spend tagging an enemy with your binoculars, the more you find out about the bigoted corpse-in-waiting. Did you know Heinz Plank was formerly a spot-welder who signed up in 1935? Or that Senior Lieutenant Friedrich Lorenz worries his friend Steiner might be losing his mind? And as for poor Clemens Gutermuth, well, he just can’t stop swearing. Quite how Karl’s rifle developed the telepathic abilities needed to scan Nazi brains for their most intimate secrets is beyond me, but spying on foes to learn more about them sure is a fun little diversion, albeit a completely pointless one. Knowing that Silvester Schönberg ‘secretly admires the British’ doesn’t make it any easier to snipe him when he’s hiding behind a crate 270m in the distance. 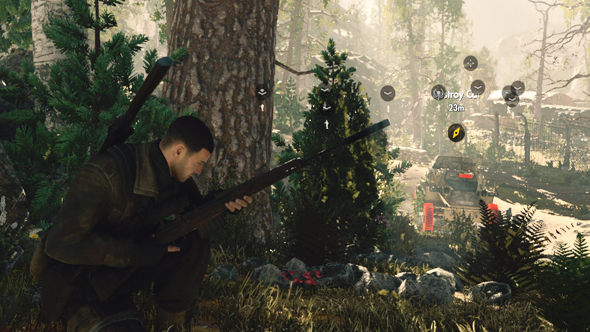 Not every foe can be tackled from the cosy confines of a bush half a mile away. Though stealth mechanics are pretty sturdy – a ‘last known position’ system helps Karl lure enemies into chokepoints should he be spotted – there are times when you’re forced to break out secondary weapons, like the MKB 42 or Thompson machine gun. It’s here, when Fairburne tackles Nazis at close proximity, that combat falls down. Your range of sidearms buck wildly when shot, and though you can reduce their recoil and improve other attributes by meeting kill requirements – off 50 enemies from a range of less than 50ft, say – they’re not much fun to fire. In close quarters, the weight of your guns never feels right, and there’s a prevailing stiffness that sours the action whenever you have to rely on the game’s short range arsenal.

Enemies are also painfully thick. Like, ‘How the heck did they even dress themselves?’ thick. In the penultimate mission, I slayed six guards all within a coin toss of each other, simply by hiding behind a door and stabbing them as they poke their heads round to investigate. I get why the second guy might be inquisitive about the corpse of his chum sticking out of the doorway. But chum the sixth really should raise an alarm when he sees his five friends stacked in a neat, claret-soaked heap. Yes, it can be fun manipulating the enemy’s attention by throwing rocks to distract them, yet compared to the AI of top-tier stealth games, Sniper Elite’s Nazis are firmly stuck in the corner with a not-so-fetching dunce cap on their craniums. 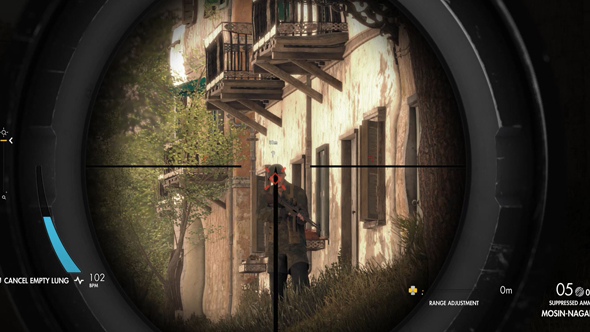 To pad out the relatively short campaign, which can also be tackled in co-op, Rebellion have once again included a surprisingly stacked multiplayer. Though online matches weren’t live at time of writing, there’s a generous amount of content here considering this is primarily a single-player experience. Team deathmatch and a take on the traditional control mode (where teams fight over a radio drop) are very much par for the online course. There are a couple of canny, returning tweaks to the standard multiplayer formula, though. Distance King scores players on how far they can snipe opponents from, while No Cross drops an impassable no man’s land onto maps, so teams are forced to go for long-range kills. Sniper Elite 4’s online offering is unlikely to develop more than a cult following, but at least it makes this a more rounded package.

As for the quality of this PC port? Well, it certainly can’t be described as a looker. The overall visual makeup of the game is super blurry, even at Ultra HD resolutions. Despite the aggressively soft image, jaggies still pop their head above the parapet – Sniper Elite 4’s anti-aliasing really sucks. At least performance is solid… mostly. I can usually hit a locked 60fps playing at 2160p on my GTX 1080, but 10-20fps drops can occur if you zoom in on foliage-heavy areas with the binoculars.

In a market flourishing with triple-A behemoths and inventive indies, it’s heartening to know there’s still a place in 2017 for the unabashed B tier game. Like a well-meaning, straight-to-video flick constricted by a tight budget, Sniper Elite 4 forever feels cheap, yet those rough edges never fully erode its silly charms. Whether using Karl’s Lung Shot breath-stabilising powers to shred a Nazi’s stomach lining or shoving a knife into a man’s throat until his trachea splinters, this is a deliciously tasteless shooter.