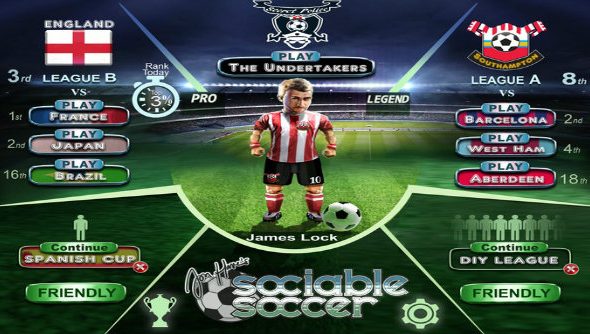 The Kickstarter for Sociable Soccer, the spiritual successor to ’90s football classic Sensible Soccer, has been cancelled after just two weeks.

If you’re reading about an indie football game, you probably like indie games, right? Here are the best indie games on PC.

The Kickstarter kicked off earlier this month with a £300,000 goal, but hadn’t even managed to scrape together 15% of that at the time of writing.

Whether the cancellation is because of lackluster funding results or because a deal has been struck with a publisher isn’t clear.

The Kickstarter doesn’t state a reason for the cancellation, saying only, “”Dear Backers and Fans, thank you for your support. Development is continuing full steam ahead but unfortunately the Kickstarter campaign is now closed. Sociable Soccer is still happening and will come out in due course through traditional publishing channels.”

If it does get published, I could see it being picked up by Team 17 or Devolver Digital. After the slow pace of funding, you could say that the decision to go down this route was… sensible. Sorry. I’m so sorry.

You can watch the original Kickstarter video below: