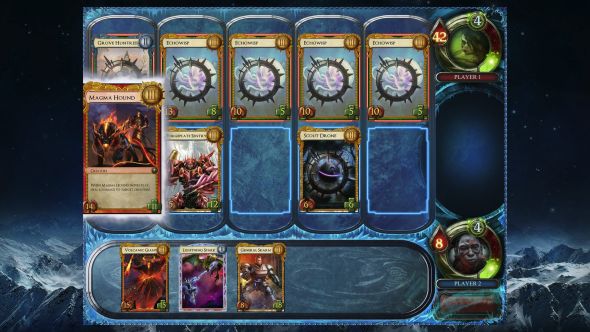 SolForge, the collectible card game co-created by the original creator of Magic: The Gathering, is shutting down at the end of the month.

To find your new CCG, check our list of the best card games on PC – from which we’ll have to remove SolForge. Sad times.

The news comes via the SolForge blog, where Justin Gary, CEO of developers Stone Blade Entertainment, made the announcement.

“As of today, we are ceasing development of new content for the current implementation of SolForge. We will continue to maintain the servers through the end of January 31, 2017,” says Gary. “This isn’t the way any of us wanted SolForge to end. Unfortunately, we bit off more than we could chew trying to build a digital game of this scope and have learned many hard lessons along the way that we will apply to future games (including future incarnations of SolForge).”

Those last parentheses might offer some hope to SolForge fans. Gary says Stone Blade are “speaking with potential partners who may be able to take over the SolForge IP and remain hopeful that SolForge will return one day, better than ever.”

But, as of the end of this month, the game is going offline. Reflecting on the game’s journey since its launch, Gary says:

“Thanks to backing from fans and years of hard work, we launched SolForge in August of 2013, and continued to support and build this amazing community for more than three years. Thousands of players have enjoyed millions of games. That is an amazing milestone that few games will ever reach. Our community has always been incredibly warm, welcoming, and one of the best I’ve ever seen in my 20 years in the gaming industry. Everyone here at Stone Blade is honored to have been a part of this journey. Unfortunately, that journey is coming to an end.”

The team behind SolForge know CCGs inside and out. They took consultation from Richard Garfield, the original creator of Magic: The Gathering, and include Hearthstone and Magic personality Brian Kibler. Justin Gary is himself a former Magic pro who won the Houston 2002 Pro Tour event.

SolForge was unique among CCGs in many ways. It removed the concept of card advantage by forcing players to draw a new hand every turn, and was uncommonly generous with card drops. It’s a loss to the genre and will no doubt be missed by its dedicated community.

SolForge is free to play on Steam, if you’d like to get in a few last games.