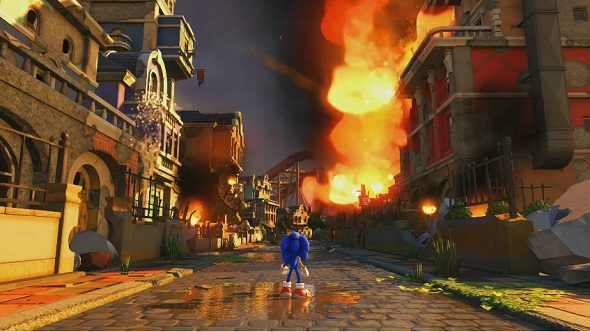 Following the news on Sonic Mania’s release date, Sega have released a lightning fast snippet of footage for the upcoming 3D Sonic game, Sonic Forces. Showing a brief glimpse of one level, this teaser gives Sonic fans something to hold onto as they wait for more news.

For those looking to play the classics, check out these great retro PC games.

The premise for Sonic Forces is that Sonic and pals actually failed in their mission to stop Doctor Eggman taking over the world. With the rotund scientist now subjugating the people of the world, it is up to the forces of good to take on the forces of evil, by sprinting very very fast through various locations. It’s certainly not Shadow the Hedgehog but it’s a much darker premise than Sonic fans are used to.

Set in a city currently under attack by Eggman and his Death Egg robots, the footage looks like your typical modern Sonic game: run in a straight line, pick up rings and occasionally slam spines first into some robots. One of the main things keen eyed Sonic fans have noticed is that Sonic Forces might have got rid of the old Boost bar seen in games like Sonic Generations, and replaced it with the Wisps seen in Sonic Colors. In the footage, Sonic gets a quick boost when he runs through the white Wisp capsules, rather than simply being able to boost at any time.

This change is probably for the best, as the Boost bar trivialised most levels in Sonic Generations as you could hold down the button and charge through the stage without much bother. Hopefully, this should vary up the basic straight line stages from just trials to see how long you could hold down boost for.

Besides that, Sonic Forces looks like more of the same for 3D Sonic fans. Red Star Rings make a return, meaning you’ll be scouring levels of all of these collectibles but nothing seems radically different. Based on the success of Sonic Generations, which was just a rock solid mix of Modern and Classic Sonic mechanics, Sonic Forces may be just what fans want.

Sonic Forces is set to release on PC Holiday 2017.