Sega are hoping that 2017 will be the year of a Sonic renaissance. Two new platformers for PC (and console) are in development: Sonic Mania and Sonic Forces. Both are due to release at a similar time later this year. Moreover, Takashi Iizuka, head of Sega’s Sonic Team, assures me that he’s now in charge of overseeing all Sonic products. This tighter grip should mean fewer third-party titles of questionable quality.

To relive the ’90s on PC rather than Mega Drive, check out our list of the best classic PC games.

And yet, Sega have taken the radical step of entrusting a title in their flagship franchise to a bunch of indies. Though they’re working in close partnership with Sega, Sonic Mania is being made by devs hand-picked from Sonic’s fan community, many of whom have ported, modded, or remastered the original classics from the Mega Drive era.

Accordingly, Mania is a reimagining of the original Sonic the Hedgehog. It’s all 2D, all pixels, all arcade sound effects, with new levels sitting alongside remixes of the originals. Sonic Forces, meanwhile, is made by the Sonic Team, and is the latest of the modern games. Indeed, Iizuka says he’s not trying to do anything too different from the last few 3D titles – the headline changes are a darker tone in the story, and the addition of a customisable player character with a choice of guns.

In with the new 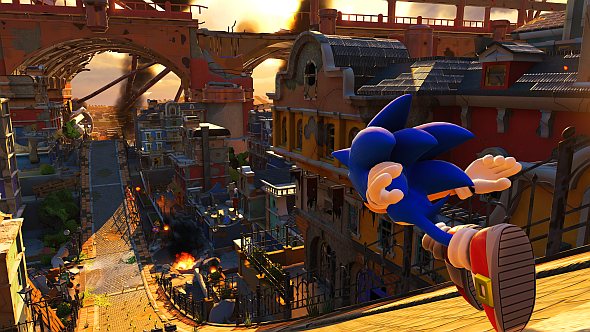 Like Sonic Generations, gameplay in Forces transitions between 3D running sections where you’ll strafe across three lanes, and side-on 2.5D sections that play more like the classics. There are also multi-stage boss fights, with the odd quick time event. You’ll change characters just as you will dimensions: modern Sonic in 3D, and Sonic’s past self – aka, ‘classic’ Sonic – in 2.5D. Your custom character appears in both perspectives, though their ‘Wispon’ adds a unique twist.

That’s the name for the aforementioned guns. I had a choice between a lightning whip and a flamethrower, each of which offers different attacks and special moves. Corresponding lightning or fire tokens can be collected from levels, and will charge environmental manoeuvres: the flamethrower can blast you higher into the air, while the lightning whip enables you to move at incredible speed and thus jump across gaps.

I played a 2.5D level that made clever use of these abilities to hide secrets and alternate routes, providing some replay value if you fancy playing with different Wispons. It was more staccato in its rhythm than the level I played as Sonic, since you’re typically stationary when using Wispons to destroy enemies.

I controlled a randomly-generated custom hero, but in the full game you’ll be able to make your own. This is a nod to Sonic’s passionate community, which includes a vibrant fan-fic scene. Throughout his 25-year career, Iizuka says fans have been sending him pictures of their own colourful woodland creatures, begging to see them fight alongside their beloved blue hedgehog. 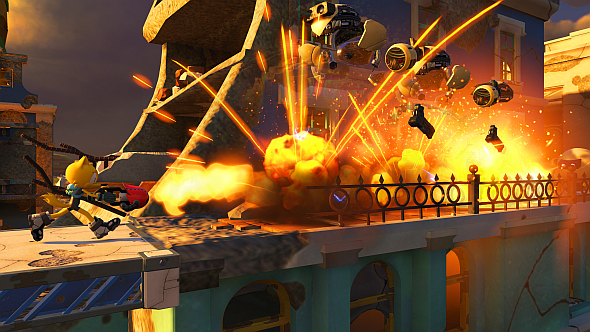 So now it’s finally happening, and hopefully those fans will appreciate the richer narrative setting in which their critter-selves will join forces with Sonic. It stars eternal villain Doctor Eggman, who has conquered “99 percent” of the world with the aid of a mysterious being named Infinite. Your custom hero will join Sonic’s ever-expanding cast as a fresh recruit to the Resistance. It’s a darker direction for the series, with no room for cutesy characters like Chao (“they’re not going to appear,” says Iizuka).

Another notable change is a tweak to the ring system. Now, all your carried rings will disappear instantly when hit, rather than giving you a brief chance to collect them again– Iizuka says the previous system was too easy, since you don’t die if you’re carrying even a single ring. I take his point, but it felt a bit odd to meticulously avoid collecting more than one ring at at a time during boss fights.

In my experience, Sonic Forces was at its strongest in the 2.5D ‘classic’ stage. Though the level’s aesthetics were a little drab – depicting a city devastated by Eggman’s robot armies – it was the best expression of Sonic’s old flowing gameplay, uninterrupted by Wispons. There’s every chance that my perspective is of its time, but I still feel like this particular lightning has never really been rebottled.

And in with the old 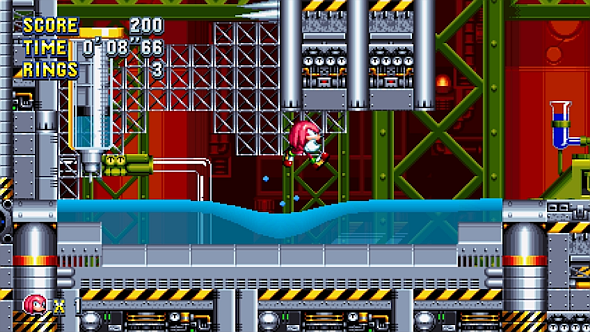 Thank goodness, then, for Sonic Mania. The care and attention to detail in this reimagining speaks to the passion of the fans who are making it; the look of the original Sonic the Hedgehog is practically untouched, but the frame rate has been doubled to 60 fps, and both Knuckles and Tails are playable. All this freshens up the gameplay without screwing with what made it special first time round.

It’s an approach that extends to level design. Classic zones have been expanded rather than rearranged, with new routes above and below the original ones, many of which conceal new secrets and Easter Eggs full of reverence for the franchise. The new Green Hill Zone – and even the frustration of repeatedly drowning in Mega Mack in the revamped Chemical Plant from Sonic 2 (tip: play it as Knuckles) – will scratch you gently in the nostalgia. But it’s equally exciting to discover new paths as it is to once again race through familiar ones.

Besides the remixes, there are several new zones, of which I got to play two: the glitzy, Hollywood-inspired Studiopolis, and the Western-themed Mirage Saloon. The latter is inspired partly by Sonic 2’s Dust Hill Zone and the Desert Dazzle Zone from the 2011 re-release of Sonic CD. Both zones were ultimately scrapped, but their connection with the series means Mirage Saloon fits perfectly. It’s further to the developers’ credit that Studiopolis does, too; both are challenging, with great music – courtesy of composers Tee Lopes and Faulk Au Yeong – and inventive new level elements. Highlights include a giant Sonic-themed popcorn machine (based on real-life ones from the ‘90s) in Studiopolis, and water seltzer bottles (labeled ‘Egg-seltz-ior!’) which spray out temporary paths in Mirage Saloon. 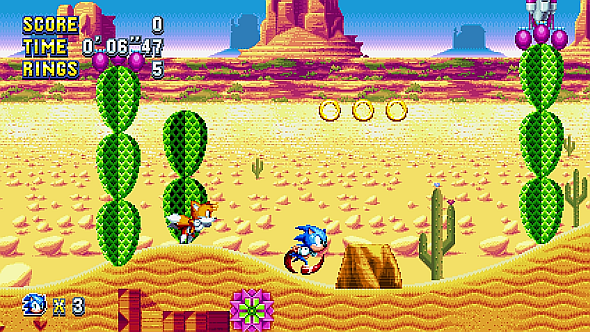 Sonic and 3D: a tricky relationship

It’s a popular view that Sonic has never really worked in 3D, but a simplistic one. Not every 3D Sonic game has been bad, and Sonic Forces looks like it’ll be one of the better ones. Iizuka argues that 2D and 3D each have advantages and disadvantages – it’s easier to see space and distance in 2D, but 3D lends itself better to intensity and immersion. He says each offers something important to Sonic, that both have their fans, and that we can expect more switching between them in future titles.

But to say Soniccanbe good in 3D isn’t mutually exclusive with saying he was at his best in 2D, and based on my time with them so far, Mania and Forces look set to reinforce that opinion.

And hey, that’s okay: classic platformers are in again. Super Meat Boy, Shovel Knight, and Ori and the Blind Forest are just three of many recent PC titles to prove action-platformers don’t need a third dimension to look and feel amazing. I know 3D was everything after the PlayStation shook up the console scene, but perhaps Sonic no longer needs to nail 3D in order to succeed, and perhaps Mania is about to prove it.