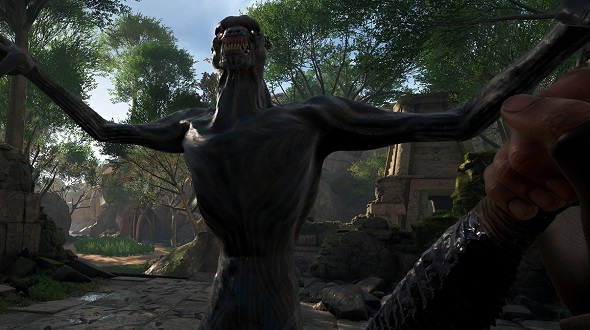 You’re on an island, one of 16 participants in a deadly game show, given just 30 minutes to find a relic and get back to the chopper alive. This is the concept for forthcoming online survival game SOS. Wanna play?

Given that you get dropped off on La Cuna island and must scavenge for weapons and supplies while other players do the same, comparisons between SOS and PlayerUnknown’s Battlegrounds seem inevitable. But to do that misses what else SOS has going for it.

For starters, your goal isn’t simply to survive but to find a relic somewhere on the island. On top of that, the island is full of horrible monsters that will chase you down. That’s why you might be wise to work with other players to then betray them later on as you make your way to the extraction point. You’ll probably have to as the chopper only has enough room for three.

SOS also has livestreaming integration so that your stream’s audience can interact with the game as if there were actually watching a game show. If you entertain them either with your personality or trickery then they can reward you. But it can also go the other way.

If you’re eager to start playing SOS then the good news is you can! Below, we’re giving away 2000 alpha keys that can be redeemed on Steam. All you have to do is complete one of the actions in the widget and you should receive your key. Redemption instructions if you need them are below.

To redeem your key, just follow these simple steps: