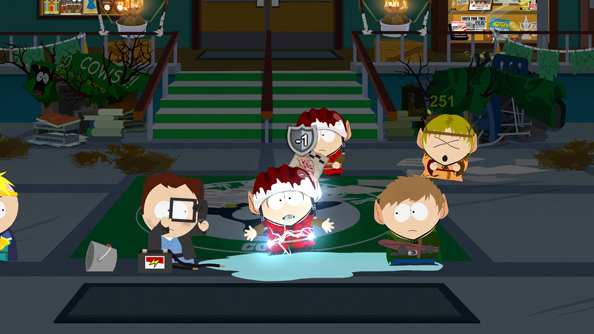 The Stick of Truth looks uncannily like South Park, so we can hardly begrudge it for trying its damnedest to soil and swear like South Park too. Anybody who’s ever seen Matt Stone and Trey Parker’s handiwork knows what to expect. “Breasts, buttocks, male genitalia”, in the words of the ESRB – and beyond the bums, a catalogue of unsavoury-sounding stuff.

So what precisely has South Park won its much-coveted R rating for, then? It’s honestly quite tough to know where to start. It begins, chronologically in the ratings summary, with occasional blood-splatter effects of its fight scenes, and the rare cartoon depiction of a dismemberment or decapitation.

Most of the rest seems harmless enough: a level that takes place inside the colon of a character, amid sex toys and faecal matter, is nothing Size Five Games’ Privates didn’t do worse. The promise of male genitalia is almost a relief in the wake of HBO’s recent boob-ageddon. (Is GTA IV the only game to precede South Park in that regard?). Elsewhere, the ESRB are nervous about “sexual moaning sounds”, and a meth lab almost certainly built in tribute to Walter’s.

The most divisive element, then, will inevitably be the use of the word “f*ggot” in dialogue. Cartman exists to shock and satirise – most get that. I suppose the question is whether he unintentionally validates and inspires too. What do you lot reckon?