Space Engineers is Minecraft in space. That’s how it’s been described ten thousand times over, and that’s how it will be described forever and ever, because that is what it is.

It is also good, an Early Access sandbox from the folks who’ve now started work on Medieval Engineers, and much like that gravity-appeasing castle building simulator, Space Engineers is all about putting beautiful things together before watching hopelessly as they fall to pieces.

In Space Engineers, you play an engineer in space and you can build anything your imagination can fathom using a tit-boggling array of blocks and shapes and contraptions. To build and power your creations you need materials and fuel derived from resources that can be mined and gathered from asteroids. With enough stuff you can then set off building space stations with artificial gravity, mining ships with cavernous cargo bays that exponentially increase your efficiency, fighter ships, and capital ships with captain’s seats and pod bay doors and turrets and missiles and things.

It’s a space sandbox, except unlike a real space sandbox (which would be a bad idea because of all the sand floating off everywhere), this is actually a really good idea. And like most sandbox games, everybody playing this is making and designing cooler things that you ever could. Like this guy who’s used gravity generators to create a space shotgun using space rocks.

The game comes in two modes, Creative and Survival. The former gives you unfettered access to the game’s toybox, with every kind of block unlocked and available for you to use. It’s here that you’ll learn how Space Engineers’ systems work, how engines draw power, how the orientation of thrusters affects movement and manoeuvrability, how to make it so gravity is the right way around.

This is probably where you’ll play with some of the game’s pre-built spaceships too, flying them into asteroids at top speed to watch the volumetric physics engine crumple and destroy their meticulously detailed forms. Big chunks of ship go cartwheeling off into space after collisions, leaving behind hobbled husks that can be repaired as long as you’ve got the patience to go over the thing inch by inch with a blowtorch. 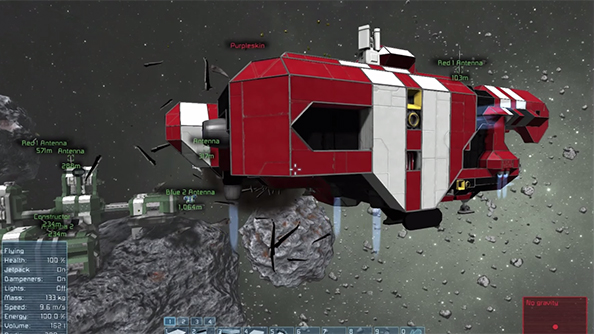 Survival mode is harsher and more realistic. Things can hurt you in this mode, gravity can splat you, every block you construct must be refined from ore that you’ve tediously scooped out of some godforsaken space rock. Playing with friends helps as your machinery is constantly running out of something it needs, either fuel or the raw bits of metal they’re using to spit out useful components.

In Survival mode, meteor showers strike your base routinely, creating an urgent need for you to build and maintain defences such as automated turrets and shields. Nature wants to dismantle your stuff in Survival mode, and that transforms Space Engineers into something approaching a videogame rather than an orbital Lego set. 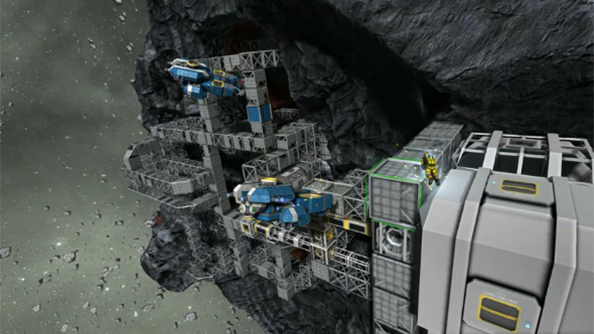 In either mode, building is incredibly straightforward. You begin with a starting block and then add to it, pointing and clicking on one of the sides of an existing block to stick another one to that side. It works pretty much as Minecraft works. Space Engineers gives you a huge number of shapes to play with though, with slopes and steps and curves all allowing you to construct something unique, pretty and, importantly, “unblocky”.

You can quickly sketch out a ship design in space by whacking a cockpit, a reactor and some thrusters on to a handful of blocks, before hopping in and seeing how your creation handles. A rear-facing thruster will give you acceleration in only one direction, so smaller thrusters need to be cleverly positioned about your ship to allow for lateral and rotational controls, as well as braking, which can be important in space. Guns can be attached if you’d like to dogfight with friends or shoot down incoming meteors by hand, while other attachments such as mining drills allow you to more quickly extract ore and do work around the map. 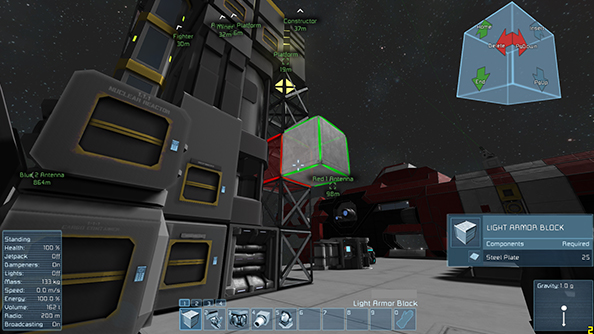 Venture online and into one of the many, many, heavily customised and modded servers, and the staggering inventiveness of an industrious playerbase will overwhelm you. Recently added blocks allow for scripts to be run and custom machines to be built. Pistons and conveyors give stations a beautiful sort of autonomy, and ships shaped like every kind of phallus you could hope to imagine dominate the skies.

For a game about building spaceships and then flying those spaceships into things, Space Engineers’ worth is difficult to nail down. As an Early Access title, it’s absolutely in the creamy upper percentiles of completeness — this would pass for a full retail release. As an interstellar sandbox however, its complexity might baffle some, while greatly rewarding players whose patience is outpaced by their creativity. For the less creative players, bouncing around the game’s servers is a sort of space weirdness safari in itself. Which is still fun, really.

Verdict: Buy, unless you are bereft of even the slightest shred of creativity