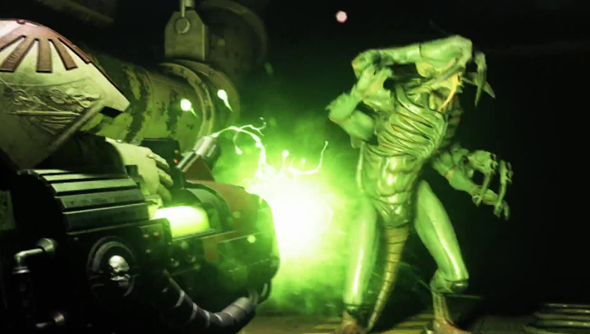 The latest trailer for Space Hulk: Deathwing’s doesn’t show in-game footage, instead opting for a fancy panoramic of space marine on genestealer violence. Yet, from what I’ve seen of the game in action, this trailer isn’t far off for the detailed violence you’ll find in the final game.

Most puzzling is the trailer’s score, rather than organs and foreboding, StreumOn Studio have gone with a Swedish mariachi band. It’s sort of brilliant.

See it for yourself:

Now, first things first, the video is a lot more lusciously animated than what I saw at a Focus Showcase last month but I was taken aback by how detailed its characters, weapons, and environments were. StreumOn have gone all out to detail the tight steel corridors of the space hulk. It’s not all tight corridors, either, at times the corridors open into large open sanctums. They’d be lovely to admire if it weren’t for all the aliens trying to disembowel you.

Unlike Full Control’s Space Hulk, which was a very faithful adaptation of the Games Workshop board game, Deathwing turns it into a first-person shooter. A very violent first-person shooter where you can torch flesh with a heavy flamer or burst it into shreds with an autocannon.

What I saw in Paris looked ever so slightly like Republic Commando, you command a squad of terminators working through enemy territory. You can order your men to take up positions and weld doors shut.

You play as a librarian so you’ve access to powerful psyker abilities and weapons as you level up through Deathwing’s campaign.

Deathwing doesn’t have an exact release date yet but it should be in our hands before the end of the year.