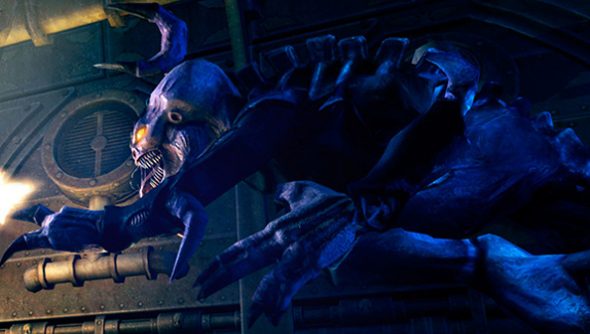 Full Control CEO Thomas Lund, the man in charge of fitting all the funnily-shaped pieces from Games Workshop’s Genestealer jamboree into your PC, has been doing the A bit of fan Q&A. Unsurprisingly, the first question the fans asked was: precisely how much like the boardgame is your Space Hulk? To which Lund answered: all the like.

“We are doing the third edition boardgame,” said Lund, unambiguously. “We’re doing it as a video game, but we’re trying to stay really close to the boardgame as such. All the rules that are in [the boardgame] will be in the video game – either its pure form or adapted to the video game format.”

Such is Space Hulk PC’s parity to its namesake that you’ll actually be able to watch the dice tumble – though presumably not chase them off the table and under the couch.

“You will be able to see the dice rolls, as they are in the log window. That will be optional so you can turn that on or off, as you want it. If you want it a little more video gamey, turn it off, and if you want to see that the computer doesn’t cheat you, you can turn it on,” said Lund.

“It’s an optional thing you can turn on or off as you want,” confirmed Lund. “In the single player game where you’re displaying the AI, maybe it makes sense, maybe it doesn’t – that’s up to you.”

Our Rob climbed fearfully aboard the Sin of Damnation at GDC and returned, remarkably, with all of his favourite limbs. What are your hopes and fears for a new Space Hulk?