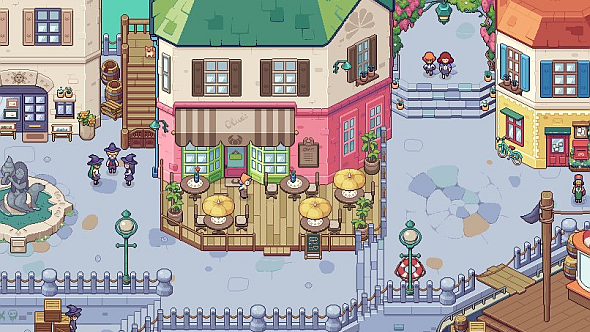 Stardew Valley was an utter delight, and part of that charm was its absurdly simple take on romance borrowed from the Harvest Moon games that inspired it, where you more or less give presents to the object of your affection until they agree to marry you. Cute, simple, and despite some uncomfortable implications the system worked well enough to be charming.

For more bright ideas, check out the best indie games on PC.

Though Spellbound – still technically a working title – is being developed by Chucklefish proper rather than the one-man studio behind Stardew Valley, the team are still drawing no shortage of inspiration from the farming sim for their wizard school RPG. One area they’re departing in, however, is romance.

“Where other games are inviting you to live out your perfect fantasy,” the studio tells PC Gamer, “in that you can date whoever you want, you can get married to whoever you want and it’s up to you, Spellbound is a little less forgiving. Dates can go wrong, things can go wrong, it’s more about that school experience. You might get a few hard knocks.”

It’s built on the style of young adult literature and is still a fantasy about wizards, so you still shouldn’t expect your love life to get too tragic.

The game’s still very early in development, and Chucklefish expect it’ll be several years before the game is ready for the public. They’ve focused their early efforts on building the world you’ll inhabit, and though it’s mostly complete the details of what’ll fill it are mostly in flux. Combat currently bears a resemblance to 2D Zelda, but even that is still firmly in “subject to change” territory. Still, the game’s already looking so adorable that I’m eager to see where it ends up.

Update September 12, 2017:We’ve learned more about the influences and gameplay of the magic school sim in a new interview.

Chucklefish, the publishers (but not developers) of Stardew Valley, are working on a similar town simulation game set in a school for wizards. The project has been teased several times, with the latest (see original story, below) drawing a huge response on social media. Though an official announcement is still “a little way away,” the team has shared more about how the game will look and play.

Speaking with PC Gamer, CEO and lead designer Finn Brice elaborates on Stardew Valley’s influence, describing the game as “a masterclass in establishing tone, charm and theme. With Stardew, Eric Barone has created the most refined game of this genre and manages to make the player fall in love with every interaction.

“We’ve taken that idea of simply falling in love with a game world and gone all in. The mechanics are going to be tight and that’s important, but from the outset our goal has been to create a game world that is entertaining and charming simply to inhabit.”

Stardew Valley revolved around a farm, so the joyful little interactions Brice is referring to include jobs like hoeing, harvesting, and watering. In the magic school, he says there are “many different kinds of magic/crafting/potion making/farming systems” that will be independently satisfying, but will also tie together. “Expect to have a lot to do in the final game, but to progress regardless of the activity.” 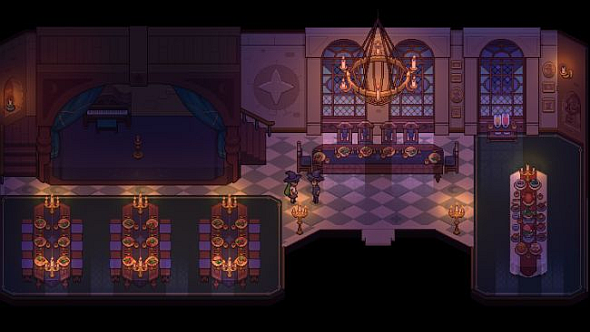 Designer Rosie Ball says the game aims to expand, thematically and mechanically, on the town simulation genre, taking it to new places as “a school operates very differently to a town.

“It’s important to us that the game captures the nostalgia of school life as much as possible. Expect memorable moments drawn from our own experience that we think players will relate to… on top of that, we’re diving headfirst into the fantasy of what’s only possible in a magical school.”

Thematically, artist Abi Cooke Hunt says many people “have picked up on the influence of JK Rowling’s Harry Potter,” but “contrary to popular belief, we were well into development before Little Witch Academia appeared on our radar. While we couldn’t say it’s been a source of inspiration from the outset, it has – perhaps needless to say – become very popular with the team.”

“Ghibli’s work plays a particular role in the visuals we’re working to create for the game. The environments of Studio Ghibli films are so captivating and charming – we want our players to enjoy this world in that same way.”

For more details, check out the full interview onPC Gamer. 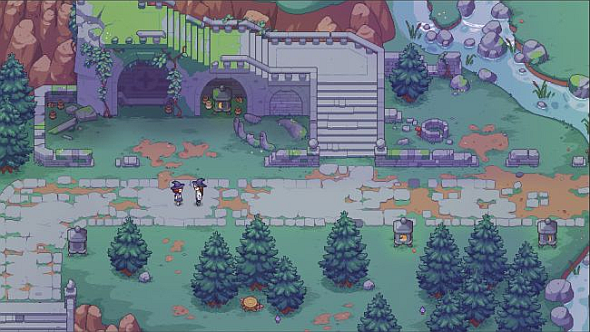 Original story September 6, 2017:Chucklefish, the people behind Starbound and publishers of Stardew Valley, are working on “an RPG/sim set in a magic school – something like Stardew Valley meets Harry Potter.” And we’ve got a new screenshot showing the project in its most advanced state so far. It’s simple and slightly teasey, but exciting.

SDV still in testing, no news yet. Thought this sneak peak might tide you over. We've learned a lot of lessons from working with Stardew. pic.twitter.com/EcabZ8DGb7

Ina follow-up tweet, Brice adds that this game is “something that builds on what we learned from Stardew. No formal announcement for a while.”

That’s not to say there haven’t been plenty of other teases. Last October, Brice tweeted this mockup, hinting pretty heavily that the game will be called Spellbound:

https://t.co/ryHxhoouy6 This mockup has me even more Spellbound

That followed a short video which gave an early look at an art style, for what is fairly clearly the same project. So ‘Spellbound’ has been at least partly on show for almost a year.

The last substantial news came via PC Gamer back in January, when Finn said it’s “an RPG/Sim set in a magic school, something like Stardew Valley meets Harry Potter… Lots of the sim features are present, day night cycles, dating, classes etc. But with some interesting gameplay twists.”

Chucklefish are also working on Wargroove, a tactical turn-based RPG described as the offspring of Fire Emblem and Advance Wars.