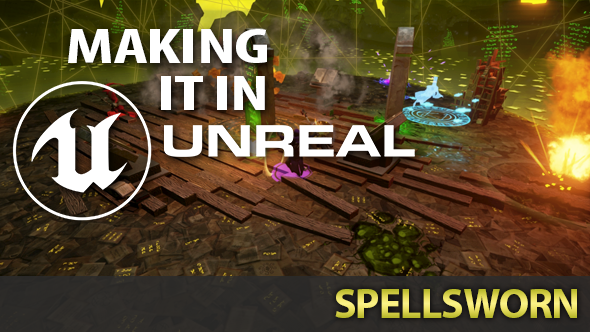 When a game spawns one great breakthrough mod, you can usually bet there are others just as deserving, waiting in the wings. We’ve seen it in the way Arma II begat both DayZ and PlayerUnknown’s Battlegrounds. Likewise, Warcraft III will leave a legacy of more than just Dota.

Warlock was – and is – a Warcraft arena mod that sits somewhere between Smash Bros. and sumo wrestling. While they didn’t make Warlock themselves, the developers at Frogsong Studios did play it at every LAN party they ever went to.

“It’s been a pretty big thing,” programming and technical director Mattias Lindblad tells us. “Not Dota big, but there are still a lot of people playing in Russia, with communities and a prize pool.”

After seeking the permission of Warlock’s creators, Frogsong set out to make their own standalone version of thisotherclassic Warcraft mod. What they came up with is a game called Spellsworn. Here’s how they did it. 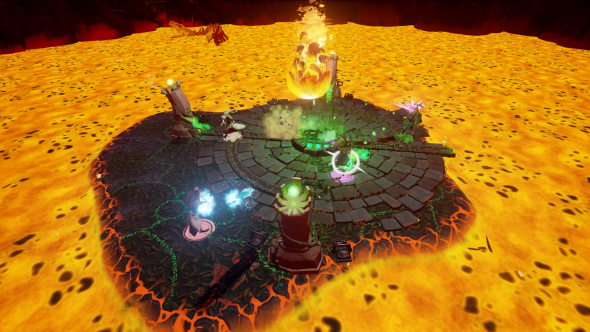 In Spellsworn, players fling spells in an attempt to push their opponents out of a central arena. And, in a Bomberman-like twist, the edges of that arena are constantly encroaching. The nature of the threat changes from map to map: glowing lava, green ichor, a terrible fog. While great for variation, these threats proved to be a technical headache for Frogsong as they tried to find a solution that created the effect they were after.

“It was a nightmare,” designer Steffan Jonsson remembers.

The shrinking arena took four iterations in all. At first, the lava was made up of hexagonal tiles that vanished one after the other, slowly sinking objects into the flames. “We didn’t like that at all,” Lindblad says. “It didn’t provide the look we wanted to go for.”

Next, Lindblad experimented with a texture that was automatically generated while Spellsworn was running. That texture marked what was lava and what was land, but didn’t prove to be as elegant as it was simple.

“It worked fine, but the performance was horrendous – we had, like, 30 fps,” Lindblad expands. “It was crazy. And it crashed constantly, because we were doing things we weren’t particularly allowed to do.”

Rather than abandon the idea completely, Frogsong refined it. Again, they loaded the texture into the CPU, but this time created an array – a way of tracking different gameplay variables in one place. The array allowed the team to set specific values for the parts of the floor that were lava, and then map the position of each player. The payoff? They knew where a combatant was at any given time, and whether or not they should be taking damage.

Finally, the floor was lava. Surely, the first kid to set that rule never knew it would get this complicated.

“It felt really nice when we made it work,” Lindblad says. “It looks pretty dope, I think.”

The trouble with magic 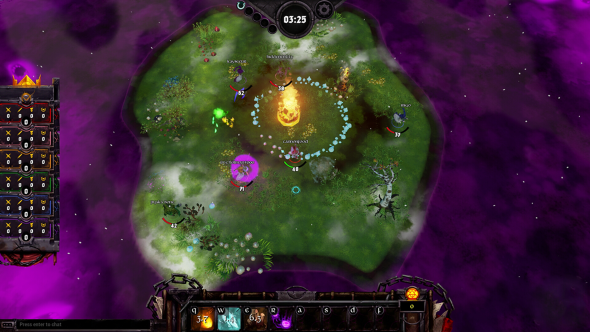 Although Spellsworn battles are frantic as they take place in real-time, the pacing is thoughtful and deliberate. Players acquire the visual comprehension to recognise enemy attacks as they whizz across the arena, and have time to react with counterspells.

That only works, however, as long as those spells are clearly visible from the game’s overhead perspective. The temptation is to make magic as spectacular as possible in the visual effects department, but that tendency led Frogsong astray early in development.

“Anders [Thelin, art lead] did go overboard with the effects for a while,” Lindblad recalls. “Where he just made everything super awesome. You couldn’t see anything.”

Since then, there’s been lots of spell-tweaking on an individual level, to make sure each effect is both visible and distinct from the rest. 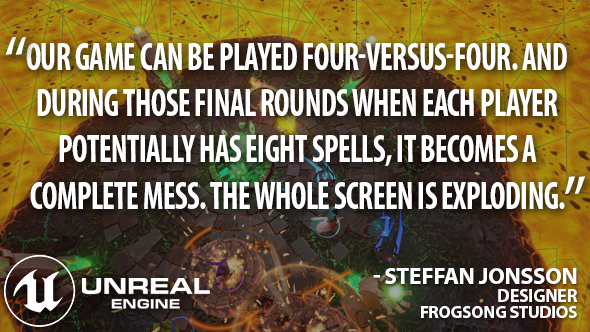 “There’s a lot of focus on readability,” Jonsson says. “To make sure that each element is unique, so that you can’t get confused with another spell. And then there’s the colour balance of a fireball over lava, for example.”

The tweaking goes on. There’s another dimension to the problem of readability, however, that Frogsong are leaving in the hands of players.

“Our game can be played one-versus-one, but it can also be played four-versus-four,” Jonsson explains. “And during those final rounds when each player potentially has eight spells, it becomes a complete mess. The whole screen is exploding.”

Frogsong say Spellsworn is best played two-versus-two. They could limit the numbers themselves, of course. But for all their fine-tuning and design nous, it turns out some players just want to watch the screen explode.

Spellsworn is out on Steam. Unreal Engine 4 is now free.

In this sponsored series, we’re looking at how game developers are taking advantage of Unreal Engine 4 to create a new generation of PC games. With thanks to Epic Games and Frogsong Studios.