A girl is looking for her parents on the moon. Her father – who is the protagonist from Spelunky 1, it turns out – couldn’t resist its call, because he senses an adventure grander than his previous one lies in wait. His daughter is eager to join because she was left behind this time. No doubt she’s heard all the stories of dad’s glory days. As soon as she lands on the cold, empty surface, she descends into a nearby cave to find an uplifting letter from her parents telling her not to worry. They’re having a blast, so enjoy the adventure that’s about to come.

That’s the story pitch of Spelunky 2, and it neatly reflects the state of mind that old and new players alike will share as they get to grips with the game. Spelunky 2 doesn’t feel like a sequel. It feels like the original was brought forward in time with a bunch of ideas that could’ve been there from the start if not for want of time, money, inspiration, or whatever else explains their absence. It doesn’t feel like a remake, either, as these additions are substantial enough to make things feel very different. Spelunky 2 is simply, in quality and quantity, more Spelunky.

You may see more of yourself in the protagonist of Spelunky 1 if you’re a returning player tempted by something familiar yet grander. The daughter feels more relatable to me, though, as her excitement builds from the game’s outset. I’ve played the original, but I wasn’t there when the sensation first began. Regardless of who you are at the start, though, I think most people will end up feeling the same way about Spelunky 2 at its end: as if we’re playing something special for the first time.

The core loop of Spelunky 2 is immediately familiar. You venture through four stages with four levels each until you reach the end. You will die a lot, and the cave will mutate each time you start again. 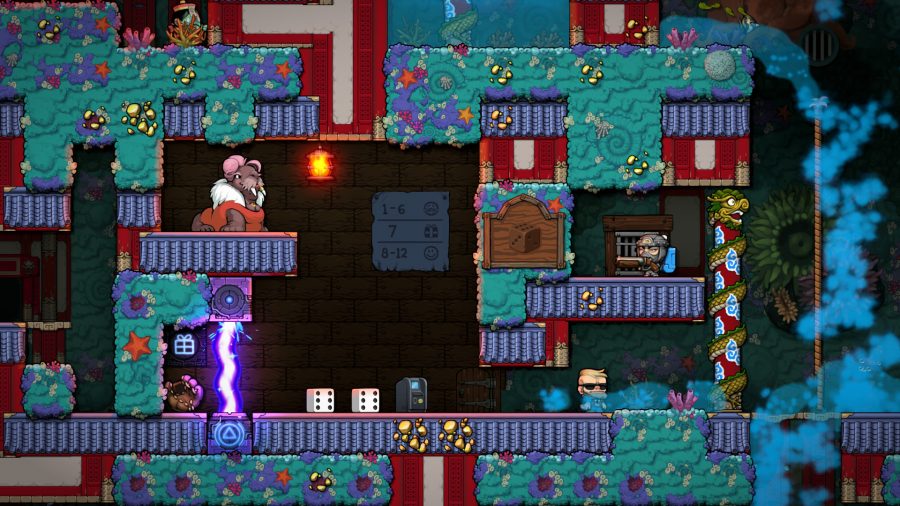 Each run sees a familiar set of rules blend together to create something fresh. Some of them you’ll remember from the original – if you toss a vase, an enemy or treasure might emerge from the pieces. If you meet the gaze of a stone-faced statue, you can expect an arrow to come your way. Toss the vase through the statue’s sightline, however, and you may find safe passage with a reward thrown in. Or you may find you’ve solved one problem only to create another as a new foe appears.

Much like Spelunky, even the smallest of these discoveries feels important

But there are new rules to learn, too. Alongside more traps, one of Spelunky 2’s additions is rideable animals. If you jump onto a turkey, it will run amok for a spell before it calms down and submits to your control, at which point it comes in handy as it will shield you from damage and give you a double jump. If you’re feeling cruel, you can blow it up with a bomb to gain some health. You have to be smart about it, though – if the terrain around the bird is awkward, you may do yourself more harm as it haphazardly runs into things that will whittle down your health, like a bed of spikes.

Spelunky 2’s cast of foes include familiar and fresh faces. Bats, spiders, and cavemen return, and follow the same set of rules they did before. Newcomers include horned lizards that will tuck themselves into a ball and roll after you, and cave moles who tunnel through the ground to take you by surprise. While there is some familiarity here, new dangers don’t come at the expense of old ones as levels feel more packed than before – the overall effect is to make Spelunky 2 feel more alive and threatening. 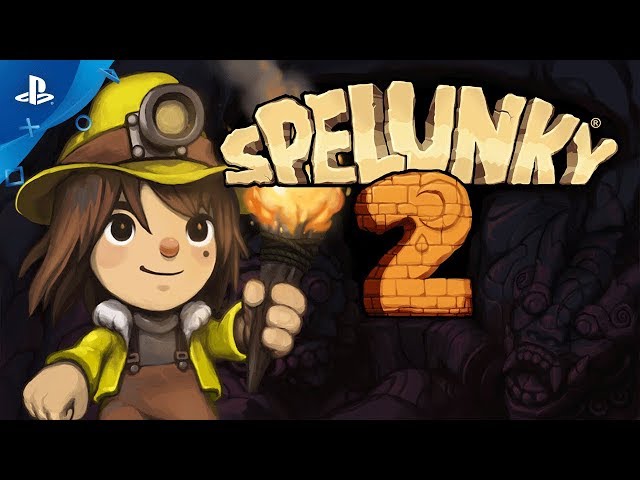 Spelunky 1’s ‘damsels’ also return, initially manifesting as your family dog Monty. Much like before, the bright-eyed pug is randomly placed around each level. Sometimes he’ll be right in front of you, other times he’ll be in the shop, or will require some excavation. His usefulness, however, is myriad. Should you carry the pupper to the end of the level, you’ll gain some health back. If you’re feeling particularly monstrous, you can lob him at traps and enemies to clear a passage to safety. Much like the turkey, balance is required. If Monty takes too much damage, he’ll pass out and won’t be able to exit the level with you. As such, you need to decide if it’s worth finishing the level at the expense of not getting any health back.

Dive in: the best indie games on PC you can play

What all these traps, foes, and friends do, however, is help Spelunky 2 find originality in each run. Sure, the roguelite adheres to a set of rules you’ll come to learn, but what leads you to your demise in one run may end up saving you in another – putting the extra effort in to get Monty to safety might prove a risk too far or give you a crucial boost of health. Sometimes a horned lizard will end you, other times it’ll save you by rolling into the sightline of a stone-faced statue and springing its trap. 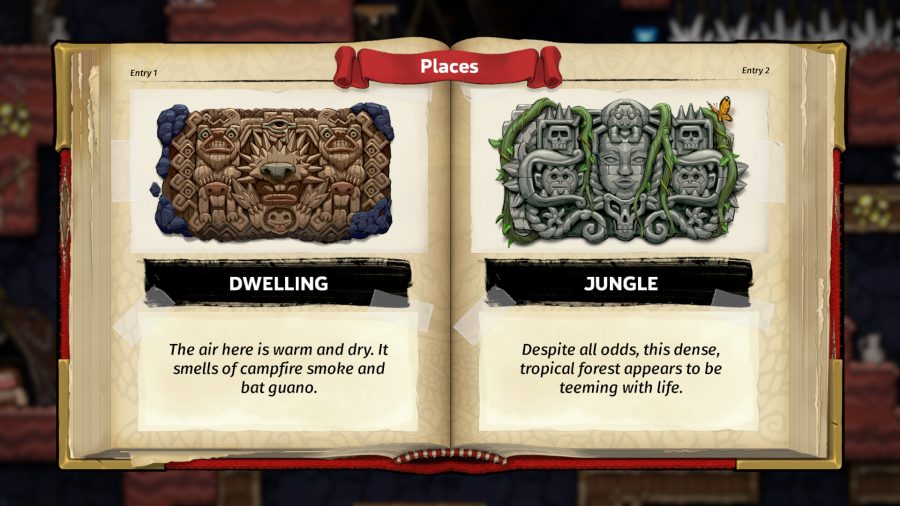 Even the structure of the game has been rethought, offering a choice in where to go next – once you finish the Dwelling level, you can head left to go the jungle, or right to check out the volcano. Each level also connects to a hidden network of tunnels behind it, presenting more secrets that beg to be explored.

Make no mistake, though, Spelunky 2 can be brutal

Much like Spelunky, even the smallest of these discoveries feels important. Those stone-faced statues are consistently the bane of my existence and have ended many of my runs, with each of their arrows costing two of my crucial four health points. Not ideal. Then I learn that I can bat away each arrow with my whip, rather than rely on tripping the trap with a rock to gain safe passage. There are many such moments of revelation to be had, each as welcome and ecstasy-inducing as an oasis in the desert as I scrabble my way to the end of the game.

While Spelunky 2 is difficult, there are measures in place to stop it feeling overwhelming. One such feature to make the jump to Spelunky 2 is the shortcut system. After you beat a stage, you’ll stumble across an NPC called Mamma Tunnel who will build you a shortcut to the next stage from your camp if you give her the right supplies (perhaps a bomb, perhaps a simple payment) at the right moments. 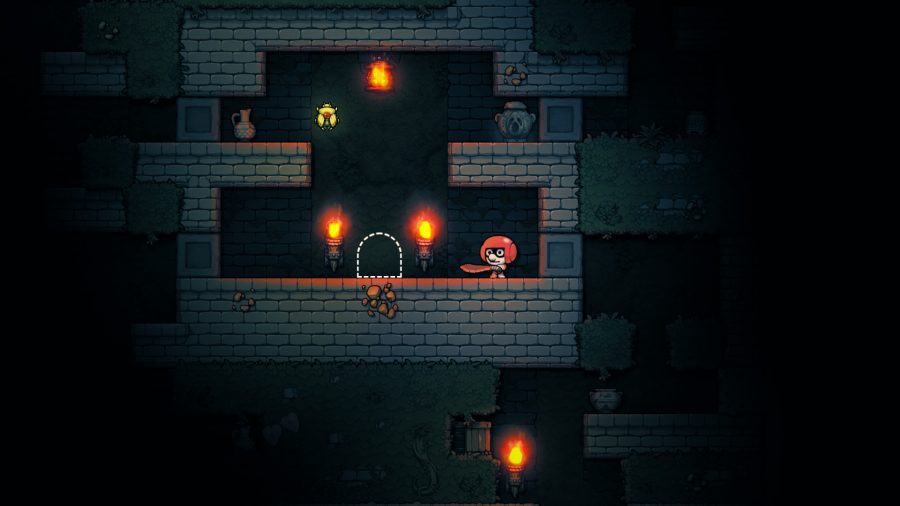 This never undermines the feeling of challenge, as you’ll need to complete the first stage at least three times before Mamma Tunnel finishes her shortcut to the next. What she does offer, though, is a chance to break down the challenge into manageable bites. Being good enough to beat the whole game in one run is daunting if you’re new, so merely focusing on clearing the first stage a few times makes each run feel more achievable while still giving you a reward for pulling it off. Once you get to a new stage, the cycle starts again until you’re ready to complete the game. It’ll happen before you know it.

Jump around: The best platform games on PC

Make no mistake, though, Spelunky 2 can be brutal. One lousy step is typically all it takes to bring your run to a screeching halt. One of my attempts sees a critter pop up from nowhere to fling me into the sightline of one of those bloody stoned-face statues and then onto the floor below. That short sequence is enough to drain me of my entire health bar.

Another run ends as I was nearing the finish because I exited a door and was immediately pinned to a wall by another enemy. It’s somewhat comical watching my character ping-pong between a rock and a lizard, but others may find it unfair to have a run ended simply because of these quirks of random level generation. It’s certainly not for everyone, and if you’re on the fence about roguelites, Spelunky 2 may not convince you. 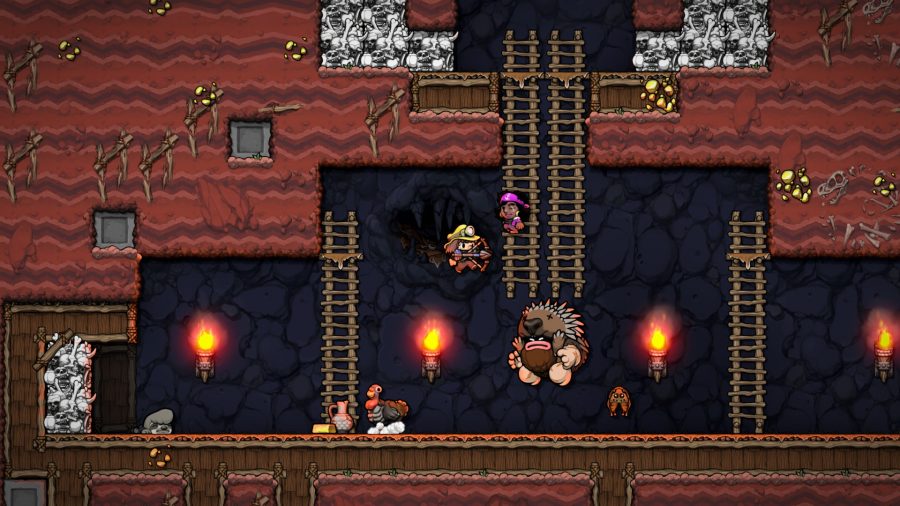 Spelunky 2 requires a cool head, then. Sometimes a run will come to an end because the layout didn’t feel beatable in that moment, other times it’s because you knock yourself out by lobbing a bomb at a wall, sending it soaring right back your face before it blows up like this all is a child’s cartoon.

Every failure is, however, a chance to learn and grow. Spelunky 2 asks for a certain level of mastery but is happy to help you get there. Each run feels charming and varied, and every small eureka moment is exhilarating. It’s a wonderful thing to experience for the first time, even if you have played Spelunky before.

A teasing blend of punishment and reward that will delight roguelike fans whether they played the first or not, Mossmouth's great achievement is in adding so much depth and scope without overcomplicating the formula.