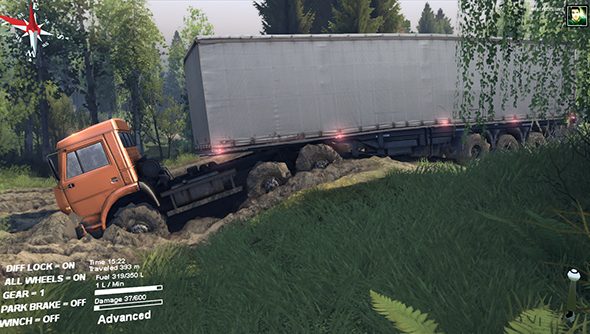 Spintires is a game about driving a truck across the countryside extremely slowly. Your truck is very heavy and the ground is very soft, almost constantly sucking your wheels downwards into its boggy brown mess, threatening to immobilise you in its wet earthy clutches.

This isn’t the sort of off-road simulator that’s accompanied by an electric guitar riff and a cool man doing a wheely over a bush. No, it’s slow and thoughtful off-roading. Progress is measured in feet per minute rather than miles per hour. This is hard work.

The first thing you’ll do in Spintires is accelerate. The second thing you’ll do is wonder why your truck isn’t moving forwards. This is because your rear wheels have, with all their traitorous rotational velocity, begun to dig two wheel-sized holes in the earth, sinking the entire back half of your vehicle into the ground. You’ll spin your wheels ineffectively for a while, like you’re in a cartoon, before fidding with the controls in an attempt to get some traction.

This is fun, weirdly enough, because Spintires has some really impressive terrain deformation tech. The ground squidges realistically beneath your slightly deflated wheels, giving way to their flattened rubber weight and creating small trenches everywhere you drive. Spin your wheels and you’ll create actual three-dimensional holes under your tyres, which pick up clumps of dirt that tumble and cartwheel skywards the more you put your foot down. Mud goes everywhere. It’s excellent. 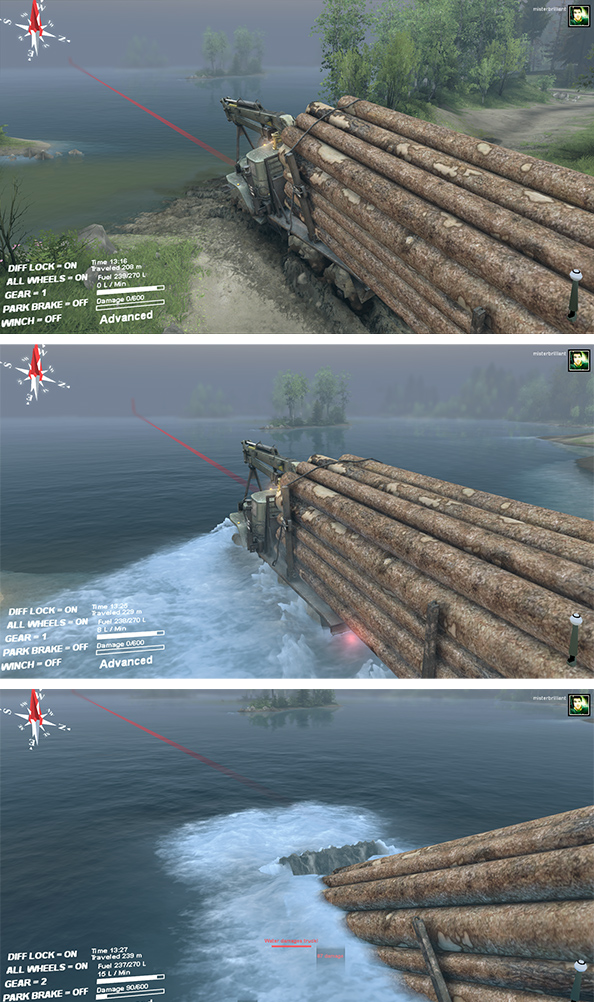 Some bodies of water are shallow enough to drive through safely. Some really aren’t.

If you have ever been a child, chances are you’ve played with toy trucks in the mud. You’ve enjoyed how they leave tracks behind, how the earth collects under their bumpers and spills aside under the unstoppable force of the relatively massive five-year-old hand pushing them around. This is that. This is almost literally a sandbox for grown up children who still want to play with their toys in the mud. I’m not sure there’s any point trying to further explain exactly why that’s appealing, just know that the way mud and dirt moves around in Spintires is satisfying to the part of your brain that still wants to go on swings.

You get out of your self-constructed divots with careful use of differential lock and all-wheel drive switches, which adjust the manner in which your wheels move, albeit at the expense of fuel consumption. Differential lock forces your wheels to all move at uniform speeds, preventing tyres that aren’t in contact with the ground (or are but don’t have any traction) from spinning uselessly or digging you further underground. All wheel drive is obvious enough, delivering power to all wheels at once and generally giving you a lot more control over uneven and unstable terrain. 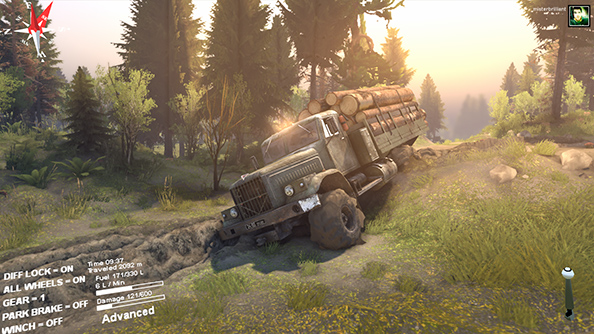 If you’re truly stuck you can switch to another truck, one fitted with a winch to tug your embedded vehicle out of its soily damp grave. You can modify any of these trucks to allow for greater storage capacity, more fuel, better resistance to damage, or even a crane for picking up loads. The latter is fairly useless in this current version, as lumber is auto-plopped into your trailer at the click of a button.

Otherwise the map is open to explore, with existing routes that run between garages, fuel depots and lumber yards. Your goal, essentially, is to reach a lumber yard, load up on logs and deliver them to the objective. In doing so you’ll drive across a variety of surfaces. You’ve got your nice compacted earth, your four-foot deep muddy morasses, your lakeside bogs and sandy spits and river crossings. Routes are short, rarely longer than a kilometre, but they’re treacherous and time-consuming trips. 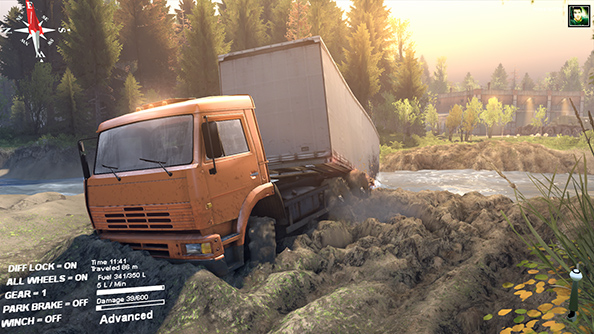 The articulated lorry is one of the hardest trucks to drive. It doesn’t belong here. It’s not like the other trucks. Notice how its trying to scoop all the mud into its grille like a big idiot.

All that road deformation is persistent too. Gouge out two deep furrows in the mud with one truck and you’ll be faced with avoiding those self-made ditches on your return journey. A part of my own map has become almost impassable, having claimed two trucks already, transforming from an initially wet and unassuming patch of riverbed to a scrambled up and all-consuming sticky brown mess.

Of the different trucks you’ll find some are more capable of ploughing through these obstacles, while others require a lighter touch and a more considered and less moist route. Ground clearance is an issue too. Drive a truck with low clearance along a route you’ve already driven a heavier vehicle through and you’ll have to attempt to drive on the raised mounds of earth on either side of the existing tracks. And that’s actually fun too, surprisingly enough. 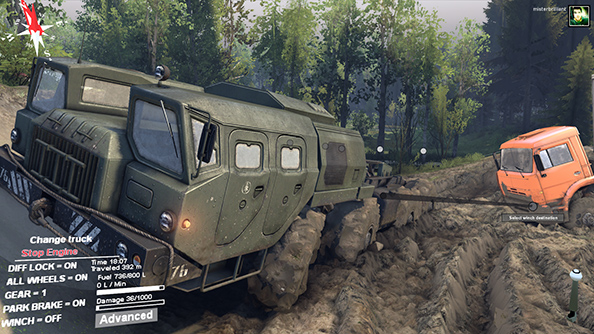 You can winch from trees, but mostly you’ll be winching this idiot truck out of the dirt. Best to keep this monster of a rescue vehicle nearby.

There’s not a whole lot else to do in Spintires besides drive around the world deforming the terrain beneath your big metal wheely-bricks. You can explore the wilderness to remove a fog of war from the map, unlock new trucks by driving close to them, or unlock new garages by delivering unwieldy carriages. Five maps offer up a little variety between games, and a multiplayer mode lets you drive around a shared map, but you’ve really got to love the idea of being stuck in the mud to enjoy this game for more than a couple of hours.

The camera is locked into third person and is super shonky too, perhaps to emulate the inability of a driver to tell precisely where his back wheels are at any given time. In practise it makes towing things unnecessarily nightmarish, though the devs promise to address this in an update. Updates and new content releases would do wonders for Spintires, as at the moment it’s little more than a pleasingly ground-churning tech demo. A muddy, messy and fun tech demo that gingerly touches on a deeply held love of playing in the dirt that you might have forgotten about.

Or perhaps you live in the countryside and deal with this sort of thing every day. In which case don’t bother with Spintires.

I’ll give it a six, but it’s a very loving six, I promise.