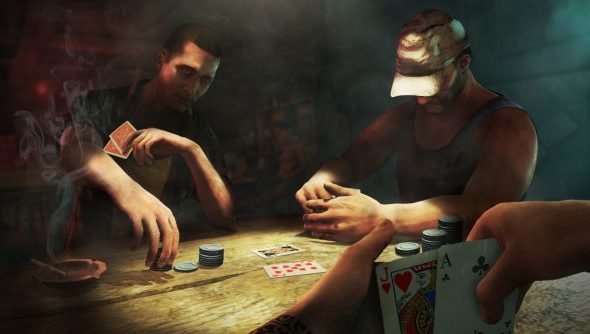 Our friends at Green Man Gaming (disclosure: Green Man Gaming are a sponsor of PCGamesN – there’s more about what that means at the bottom of this post) are this month’s best Santa: they’re detonating a voucher bomb every day this week on a brilliant selection of classic and/or excellent PC games.

That includes daily voucher discounts on big-hitters like Guild Wars 2, Skyrim, Far Cry 3, Football Manager 2013 and XCOM: Enemy Unknown, sitting alongside discounts on games if you pre-order some of next year’s biggest.

Read on for the details.

Before we begin: a quick word about how Green Man Gaming work. They’re an indie digital retailer that sell both digital downloads and games that unlock on other retail clients. So: they’ll sell you games for their Capsule client, but also Steam codes, Origin codes and unlock codes for MMO games. If you’re a rabid bargain hunter – then you’ll want to keep an eye on them.

So: to the deals!

You can get Chivalry, the slightly ridonculous medieval hack and slash first-person thing: for 50% off. It unlocks on Steam.

Hitman: Absolution is also 35% off: but apply the voucher GMG35-3PPWQ-TEONQ at checkout. Hitman unlocks on Steam.

Football Manager 2013 is 35% off if you use the code GMG35-0VJBL-WKQEA at checkout. It unlocks on Steam.

XCOM: Enemy Unknown is 30% off if you use the code GMG30-0LKXU-EPF98 at checkout. It unlocks on Steam.

Elder Scrolls V: Skyrim is 40% off if you use the voucher GMG40-4DIJU-TT4PB. It unlocks on Steam.

ArmA 2: Combined Ops (the version of ArmA you’ll want to play DayZ) is 35% off if you apply the code GMG35-O90RW-Q2CD2. This game unlocks on Green Man Gaming’s capsule client.

Far Cry 3 is 30% off if you you apply the code GMG30-FC31S-GR34T. It unlocks on the Green Man Gaming capsule client, and requires the Ubisoft uPlay client.

Assassin’s Creed 3 is 30% off for European gamers if they apply the code GMG30-H86GA-AQB2H. It unlocks on the Green Man Gaming capsule client and requires the Ubisoft uPlay client.

Important information: all deals are subject to availability, and while stocks last. So, you know. Don’t hang about.

Right. Let’s have a brief moment to consider what we’ve done so far.

Take a deep breath. And relax. The armageddon continues.

In the preorder offer, customers who buy any of the following games will receive a one time use voucher that will give them 35% off their next purchase. Which is, frankly, a bit ridiculous. The games on offer are:

Important terms: this voucher can only be used on select PC Download games. This voucher cannot be used in conjunction with another promotional offer (e.g. voucher, cashback) and will expire 21 days after receipt.

This isn’t the end. There is more, always more. There are always more vouchers. Always more discounts. Like a film villain coming back from the apparent dead for one last drunken assault on your wallet.

Use this voucher: GMG25-CZPYL-D5MQ6 when you check out.

And with that, final burst it appears to…

Apparently they’ve started selling PS3s. WHAT MADNESS IS THIS.

The nice man from corporate land says that UK customers can buy a PS3 with Uncharted 3 and Gran Turismo 5 for £197.99.

There is now no money left in gaming. The voucher apocalypse is over. All that remains is a giant mushroom cloud over your wallet.

And, the inevitable disclaimer.
Disclosure: Green Man Gaming are advertisers and sponsors of PCGamesN. We’re proud to have them onboard. They’ll let us know early about any deals that are taking place on their site, but don’t approve copy or any of the content we post. If it wasn’t for them, Jeremy’s rehabilitation into polite society would have been all but a dream.