I’m afraid we have to interrupt your regular scheduled Spotlight on Greenlight since Jules is currently riding across Europe on a push bike. Thankfully Matt is sitting in the comfort of an office chair rather than the bum-taxing pain of a saddle, so will be hosting this one-off special. Today’s focus is Liege, a beautifully hand-drawn tactical RPG with the blood of George R.R. Martin flowing through its (presumably soon-to-be-murdered) characters’ veins.

Liege basically pounces on you the moment you see its card on Greenlight. Amongst the party of 16-bit nostalgia-trips and slightly iffy looking zombie shooters, Liege’s card is a stunningly drawn square of concept art. The game’s Greenlight page is full of similar drawings, all the work of John Rhee, the singular force behind Liege. It’s a classic medieval look, but one impeccably realised. The key though is how this artwork has translated into the actual game. Liege looks like its concept art; the entire world hand-drawn in a watercolour style that makes it appear like art from the period itself in full motion.

It’s clear from the isometric style that Liege is influenced by 16-bit titles of yesteryear, but the aesthetic more closely resembles Braid than Final Fantasy. Rhee has crafted a high-definition world that simply nods to its inspiration, rather than shackled to it in adoration. The same applies to the orchestral score that accompanies it; there’s no MIDI here.

Alongside these artistic homages, Liege also adopts turned-based combat as part of its debt to Japanese RPGs. Thankfully though Rhee has scrapped everything that’s awful about those random encounters and made a system that makes sense for the universe he’s created. Encounters aren’t random; you’ll see enemies in your path. There’s no spinning screen transition, no ridiculous battle arenas separate from where you were two seconds ago. You fight where you stand, and where you stand makes a great difference. Rather than relying on numerical stats and grinding for XP, success in Liege’s combat is dictated by where you position yourself and weapon ranges. Distract an enemy so an archer can let off an arrow unhindered is the route to victory, not killing a hundred thugs to increase your stat levels. Each class of character has unique perks, such as knights being able to break the defence formations of pikemen. Like XCOM, you’ll want to assess your defences before the end of your turn, because a unit without his shield raised is likely to be dead before the enemy finishes his share of the action. 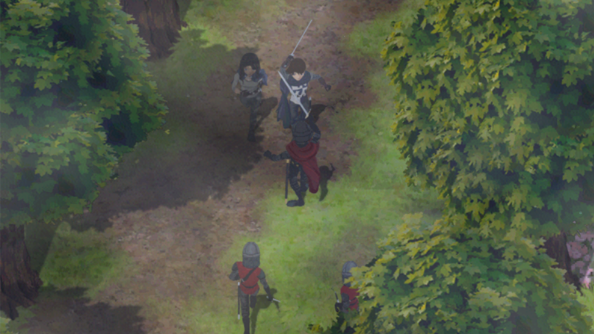 So there’s likely to be plenty of death with the more realistically-modeled combat system, but that’s not where the Game of Thrones comparisons end. The story reads like the alternate-universe version of George R.R. Martin’s power-struggle epic, with the world erupting into civil war after the royal family unexpectedly snuffs it. Each character you play will be from one side of the conflict, be it one of the houses vying for the throne, the armed forces of the monarchy who are suddenly leaderless, or a member of an underground revolution looking to make the most of the chaos. Sounds all sumptuously complex, and thankfully not ‘six kids save the world from a supernatural evil’ in the manner that JRPGs tend to be.

Liege started life on Kickstarter, and a healthy campaign has ensured that extras such as rideable horses, a massive battle during the fall of a city, and higher resolution artwork made it into the game. We’ve still got to wait until next year to see the game in the light of day, but do give it a big thumbs up on Greenlight to ensure we see it on Steam. For anyone interested in Liege’s progress, keep an eye on John Rhee’s blog at Coda Games’ website.