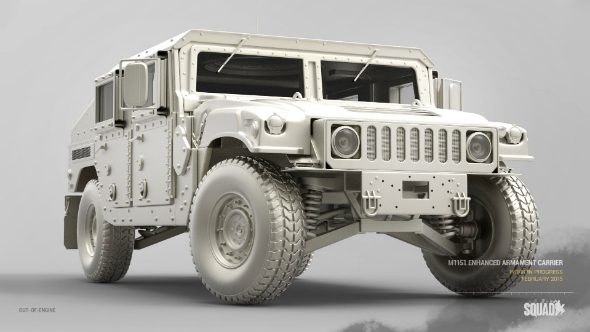 If you like real military history then there’s loads of great World War 2 games on PC.

The team at Offworld Industries have been hyping up the wheeled additions for several months after some unforeseen technical limitations of the engine caused a delay.

Transport, logistics and fire support vehicles have been added for various factions in the game in Version 7, which also implements the system used to “claim” a vehicle for particular fireteams.

No tanks as yet, though the Russian BTR-80 APC and US armored M1151 HMMVW do offer slightly more resistance to small arms fire to their insurgent counterparts: Technicals.

A battlefield logistics system has also been implemented, meaning supplies will need to be driven by designated support drivers to the forward operating bases in order to keep fights going on the larger maps.

Version 7 also includes a large number of tweaks to kits and weapon handling, as well as damage changes including introducing penetration as materials and ammo types are prepared for a much larger overhaul for more realistic cover dismantling.

There’s a massive number of changes to read through, as well as introductory explanations of how vehicle claiming works, on the Squad site.