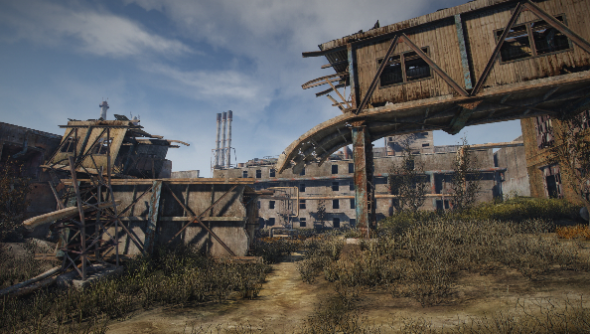 It’s been six months since the sad, confusing kerfuffle that ended development of STALKER 2, and six months since work began on its sort-of-follow-up, the online, free to play Survarium. Developer Vostok games have been nattering to camera about scavengers – the faction to which all players will belong upon starting the game.

Say Vostok of the scavenger: “He doesn’t have a house, he’s got very basic weapons, he’s alone, dirty, lives in slums and tries to survive.”

These scruffy survivors lack the means to create their own clothing and equipment, and that’s to be reflected in both their aesthetic and the effectiveness of their gear, say Vostok. However, their predilection for stealth means they are ideally suited to scouting, seeking artifacts and, potentially, sniping.

All will start in possession of a TOZ-122, a manually-reloaded hunting rifle, which can be traded in soon afterwards for a TOZ-34, a shorter-ranged veteran of the STALKER series.

The rest of a scavenger’s base arsenal includes medikits, antirad, and “simple devices for artifact seeking” (metal detectors?), as well as tools for the disarmament of traps and repairing of the simplest of devices. Players can also acquire a backpack, a practical addition for any daytrip which allows the scavenger to carry more artifacts than any other faction.

Honestly, I’m not entirely sure – nay, entirely unsure – of what sort of game Survarium is going to wind up being. But as a part-survival sim, part-deathmatch online thing, it has no direct peers.

What do you think? Will Survarium be a step too far outside the limits of STALKER’s exclusion zone, or a bright green work of irradiated brilliance?