Fittingly enough for a game about Stan Lee’s finest, Marvel Heroes struggles with a dual identity. At its core, it’s Diablo – built by Blizzard veterans at a studio founded by David Brevik, architect of the action RPG genre. But it becomes somebody else when it dons its costume – a Brian Michael Bendis-penned plotline featuring Marvel’s paper-chain cast of interconnected characters.

In the wake of Gazillion’s game update 2.0 and a game-wide event to unlock the Bifrost Bridge to Asgard, we talked to creative director Jeff Donais about life in the slipstream of Marvel Studios’ race for the post-Avengers box office. 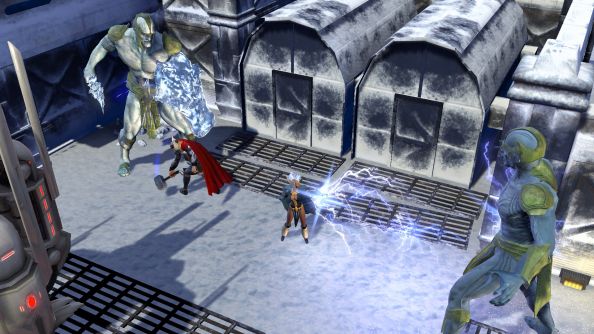 Jeff Donais has worked on a lot of games – and a previous stint on StarCraft II means he’s spent plenty of time analysing numbers and their effects. But he’s never seen numbers quite like those of Marvel Heroes, which since its launch in June has dwarfed Gazillion’s expectations for what they like to call ‘veteran player retention’.

“I’ve worked on a bunch of games over the years and we have the highest number of people who keep playing month after month,” explained Donais. “The number is extremely high, it’s a very high percentage, higher than I’ve ever seen.”

There are at least a couple of reasons behind those anomalous figures. Primary among them is Gazillion’s understanding of what’s required of them, as developers of a persistent online PC game in the days of League of Legends. With one major patch a month and a minor patch a week, their update turnaround is lightning-fast (“When I worked at Blizzard, it would take us six months to do something that we do in one month here,” marveled Donais, “which is beautiful and insane at the same time”).

And Gazillion seem to spend as much time trawling their own forums as they do coding – everyone in the company, from designers, to programmers, to president Brevik himself is committed to talking publicly about hotfixes and future patches, letting their players know “they’re part of the development of the game”. 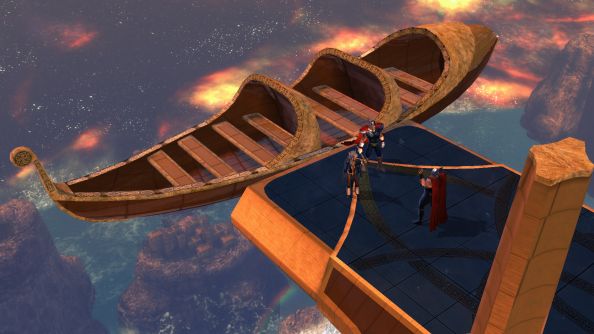 But there’s another factor too – the healthy influx of new blood that flows into the game whenever a new Marvel film hits cinemas. No sooner had launch figures for Marvel Heroes settled down than Iron Man 3 appeared, handing Gazillion a free spike in player numbers, and Tony Stark a spot in the game’s top three heroes list.

“Actually, Iron Man was very interesting, because Marvel had shown us the movie so we knew about the house party protocol where all the suits flew in,” anecdoted Donais. “They actually gave us their 3D renders of every suit and they said ‘It’d be cool if you put them in the game’ – so we actually have fifteen Iron Man options. If you play Iron Man you can wear any of the suits that were in the movie.”

That experience has come to guide Gazillion’s hand as they look to expand their world. In future updates, they’ll ensure their stories cross paths as frequently as possible with those of the movies, and continue to take advantage of their access to Marvel’s in-progress productions.

“Whenever the films can provide us a tipping-off point, we are using that content and Marvel has been very helpful and aggressive with this in letting us see the scripts and actually get the in-game,” said Donais. “But if there’s a time when there’s no movie that we want to take from, we have a ton of content just waiting – Galactic-type content, Infinity-type content that we’ll put in the months where there’s no big movies.”

This is not one of those months. Gazillion had nailed down character models for the frost giants and dark elves of Thor: The Dark World’s cross-world epic long before its hammer came down on box offices two weeks ago – and it’s no coincidence that it’s Asgard high-level players have been pottering about since the game’s last update.

The relationship isn’t so close that Bendis and the Heroes dev team need relinquish their creative control, however – Donais assures me that it’s Gazillion who decide how far to go with each film.

“For Captain America, we’re considering opening up a small time-warp that allows us to go and fight in World War 2 and let the heroes be part of World War 2, which is not technically part of the Captain America film,” he divulged. “But it’s close enough that it would be kind of fun to launch that at the same time.”

But it’s here that Marvel Heroes’ dual identity threatens to throw up problems.

Through Diablo, action RPG players like Marvel Heroes’ have become accustomed to replaying story chapters again and again. So how do you write Marvel-style stories, with all the attendant twists and turns, while ensuring that players aren’t rolling their eyes the third time they come upon a familiar plot twist?

“It’s more like the three-hundredth time they come to the plot twist”, laughed Donais. “So the way we do it, the way we’ve been approaching it is to create something like two parallel experiences.”

The first is the modular storyline, now in its ninth chapter with the introduction of Loki and Asgard.

“That is the story proper, as described,” said Donais. “That is the plot, with many, many plot twists, and Brian Michael Bendis wrote almost every single line in it.”

Second is the game’ s randomised content. While players will undoubtedly play through the story many times at various difficulties, it’s this which has Donais convinced of Heroes’ longevity.

A new Midtown Patrol zone features procedurally generated layouts, and is populated by unpredictable discoveries, ambushes and enemies. Terminals, meanwhile, are “ten minute dungeons” which allow players to tackle selected previously played chapters as “mini-stories” – pocket realities created by a cataclysmic event in the game’s lore. And two factional giant tribes on the outskirts of Asgard have introduced an eminently replayable feature to the game: PvP.

“Probably 100% of Marvel Heroes players will actually try it, and they’ll have fun playing it casually, but 10% will actually care about increasing their PvP rating and really gearing up specifically for PvP,” mused Donais. “And I think that’s good, that’s a good ratio for an MMO or an ARPG.” 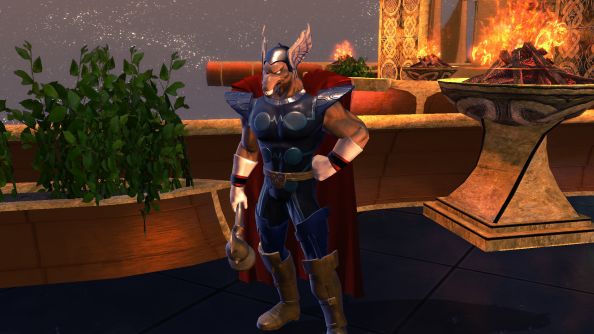 December will see the release of Siege of Asgard – by then Gazillion’s third update set in the Norse capital and its closest linked to the events of the Thor movies. But it’s also there the studio plan to fill out the game’s randomised half with new dungeons, modes and challenging – cementing its dual identity as a positive. Which for Donais, it evidently is.

“Iron Man really spiked in popularity when we gave him the move from Iron Man 2,” he confided, excitedly. “The one where he puts lasers out and spins all the way around with lasers. And it’s like, ‘Hey Rookie, get down!’ and then he just kills everything with lasers – we added that move, frame for frame, within the game and then we saw the popularity of Iron Man increase tremendously just from that.

“And we do that, basically every week – we add more and more moves from the comic books or movies.”