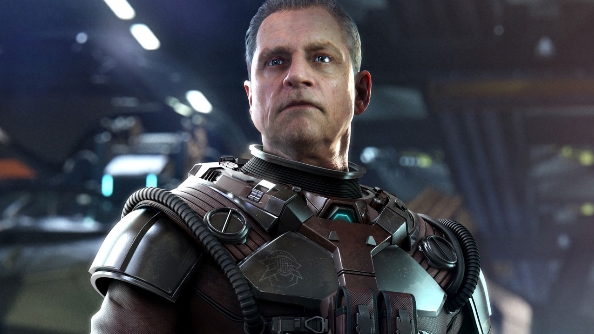 Famous Star Wars man Mark Hamill, who once starred in PC game Wing Commander back in the day, didn’t hesitate to sign up to play a character in Star Citizen’s Squadron 42 campaign. In fact, he didn’t even read the script beforehand.

Blast off into the stars with some of the best space games on PC.

In a talk with PC World, Hamill explained that from the moment he met Chris Roberts back on Wing Commander he liked him, so it was easy for him to say yes to joining him on Squadron 42.

“I thought this was a closed chapter in my life, and when [Roberts] called and said, I’d like you to do this, I didn’t even have to read the script. I accepted immediately because I trust him so deeply,” said Hamill.

Back in the Wing Commander days, Hamill was seen in live-action video – or FMV sequences as they were known – and were the kind of cut-scenes we all got rather excited about. These days Hamill and his star-studded cast-mates (including Gary Oldman and Gillian Anderson) are rendered in-engine thanks to performance capture.

“The technology now is the next generation of the facial rigs and the full 3D scans of the actors, and it allows so much more detail and nuance,” he said.

“This is integrating the characters into its own world, so there’s a cohesion to all the elements, and it’s extraordinary. You put these rigs on and they’ve got these cameras on your face. They’ve got so many different cameras around the studio.”

Hamil notes that the system, with up to 53 cameras focused on an actor, is a somewhat easier system than movie green screens, as the in-game reality is being rendered as the actors perform, and can be seen on screens in the studio.

“So you’re in this bare-bones studio with apple boxes for chairs and just the basic rudimentary wood structures to approximate the cockpits and so forth, and yet when you look on the screen, you see what they’re getting. It’s totally realized,” he said.

“So it’s almost beyond even doing some of the stuff that you do on green screen, where you look at the drawing and get an idea of what’s eventually to come down the road. It’s very exciting.

“I can’t tell you how exciting it is to always be at least close to cutting-edge technology. I’ve been so lucky in my career, not just in Star Wars, but with Wing Commander, and now with Squadron 42.”

As far as digital actors go, it certainly seems like Roberts is pushing the boundaries with Star Citizen. The use of Andy Serkis’s Imaginarium Studios guarantees the right technology, so hopefully the script and story are up to scratch, too. We’ll find out, as ever, when the game is finished.