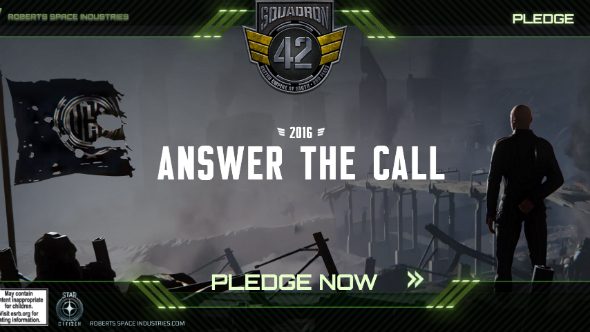 Update October 10, 2016: As reported by PCGamesN and German magazine GameStar last month, Star Citizen’s campaign module Squadron 42 has been delayed out of 2016, with no new release date set.

CitizenCon took place last night with a massive two hour presentation of everything going on in Star Citizen at the moment. This included a section from Chris Roberts about the state of Squadron 42, the game’s single-player campaign, confirming the rumours that it had been delayed from its 2016 release date. Roberts did not provide a new go-day, though it is assumed to be some point next year.

You can watch the full presentation above. The demo of the procedural planet tech and extremely large sand worm starts at 01:25:20. As much as procedural generation in space has had something of a bad rap recently, it does look rather lovely. All these years later it’s difficult not to get caught up in the 127 million dollar hype, though at this point if you aren’t already invested your pre-order probably isn’t required for the game to be completed.

Around 57 minutes in Chris Roberts pops up to talk about Squadron 42 specifically. There’s more than 60 missions in there, 340 speaking characters, 1,255 pages of dialogue – it’s big, is the general message, as large as any triple-A production with cast quality to rival Hollywood. This is also when he announces the delay, pointing out the scope of the campaign has grown significantly since announcement. They were planning to show off a mission at CitizenCon that was fully finished – most are still at “grey box or better” as Roberts put it, where they know where everything is going and the balance is done but not all the effects are in – but they didn’t quite get it finished.

That would probably suggest it will be mid-2017 before it’s ready to be played, though Cloud Imperium have clearly learned to stop saying dates until they know for sure.

Update September 6, 2016:We reached out to Cloud Imperium Games to see if we could get a definitive answer regarding the release date of Squadron 42, Star Citizen’s star-studded single-player spinoff.

When asked by email if they could confirm or deny the delay, we were instead offered reassurances that development of the ambitious game is going as planned.

“Chris [Roberts] spoke to multiple reporters at Gamescom who asked about the status of Squadron 42,” a CIG spokesperson told PCGamesN.

“We have been feature locked for a while and things are coming along nicely. In every case he told them that we are hard at work on the game and are focused on making it great, but no official launch dates were discussed.”

When we pressed on the date and whether it was likely to get pushed back, we were told it;s “still too early”, but reassured that more would be revealed aboutSquadron 42’s progress at CitizenCon next month.

Original Story September 4, 2016: Star Citizen is no stranger to release window delays, and though even the windows themselves have been vague and pretty wide, another appears to be moving into next year.

Speaking to German magazine GameStar, Chris Roberts has said that the single-player component of Star Citizen, Squadron 42, will be more likely to arrive near the middle or end of 2017 than its current Q42016 window.

The timeline of its release has been one of the more obviously fluid points of Star Citizen’s ongoing development, as an original 2014 release pledge has shifted smoothly from year to year. The game’s own minisite currently has a “2016” marker for availability.

Though bad news to some, the delay appears to have been enacted to ensure more features are complete as the monolithic task of tying together a galactic space exploration game with planetary landings continues to show.

The latest update on such systems from the UK office of Roberts Space Industries speaks of the many seemingly small advancements the team has made on such features as cargo and wardrobe choices up to much larger impactful areas of the game such as spacecraft design.

See the 3.5 development blog update below: