Being the highest-funded videogame in Kickstarter history, Star Citizen has a lot of pressure on it. Developer Cloud Imperium Games has already been struck with controversy several times due to failing to meet deadlines and having lawsuits filed against it. It’s been a rocky development, then. But one area that Star Citizen can be praised for is its accessibility features, to the extent that it now supports American Sign Language (ASL) – making it one of only a few videogames that do.

“At CitizenCon, a backer said to me that all he wants to do is fly a ship to a planet and watch the sun rise,” animation director Steve Bender tells me. “This led to a larger conversation about ways to make your character more like you. We eventually got to talking about how we could work with the community to get their real-life experiences in the game – airplane traffic controllers, bartenders, and people with disabilities.”

It was out of these conversations that the Star Citizen team heard an inspiring story about one of their deaf Kickstarter backers who was a regular at CitizenCon. “This person brings his brother every year to translate the presentation to him in American Sign Language,” Bender says. “That jump-started the whole process, and we eventually worked with the backer’s brother to capture ASL phrases and emotes that will go into the game.”

Given the fact that Star Citizen is an online game and places huge emphasis on emergent gameplay, it’s a particularly social space. Due to that, as Bender says, Star Citizen acts as a “window into a larger world” for some players. To address that, many forms of representation exist in the game through skin colour, gender, and the range of professions from athletes and archaeologists to translators and medical staff.

All of this helps players to put themselves inside the game. This is helped along by voice chat and a range of voice packs that let players command and interact with their ship by talking into a microphone. But what about those who have to communicate in other ways? “They meet people, socialise, and make friends, but they can’t roleplay as themselves,” Bender says.

being able to communicate silently also can create tactical advantages

That’s why Cloud Imperium has worked to not only implement ASL into the game but to ensure it primarily feeds into social interaction. “For ASL, we plan to work with our narrative group to create a database of phrases and common words,” Bender explains. “This ranges from simple phrases like ‘thank you’, to complex combat signals like ‘stop, go, left, right, enemy ahead’. The goal here wasn’t necessarily combat, but rather to create a larger feeling of community – but it’s nice to get combat language as a bonus.”

Although this is a huge step in accessibility, it wasn’t as big a task as you might think at first. “Honestly, the biggest obstacle was timing the shoot to work in conjunction with CitizenCon and the backer who we filmed to capture the emotes,” lead animator Bryan Brewer explains. “Long story short, it’s quite easy to create emotes and do motion capture. The difficulties are the same as with any motion capture shoot: scheduling, technical issues, that kind of thing.” 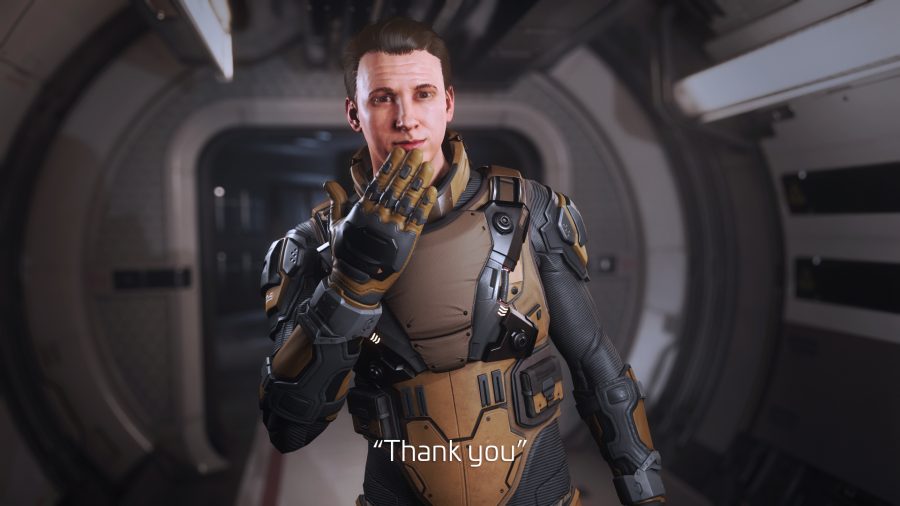 In fact, adding American Sign Language into the emotes interface can actually be done in parallel with development. “Motion capture and emotes are pretty much table stakes for game developers at this point,” Bryan continues. “It’s simply a matter of prioritising the emotes developers want to put in their game.”

Eyemine is a free software that tracks eye movement and applies it to games. It adds a keyboard-style interface to the bottom of the screen so players with disabilities can play games using eye movement and blinking. Most setups are relatively basic, but some players have found ways to play with much more sophisticated versions.

The process of getting motion capture and turning it into emotes hasn’t taken much of a toll on the Star Citizen team according to Brewer. “Honestly, the biggest obstacle was timing the shoot to work in conjunction with CitizenCon and the backer who we filmed to capture the emotes,” he tells me. The ASL emotes, when created, work directly with the existing emote interface in Star Citizen, and pair with a number of systems that were created for the game beforehand.

With the first set of ASL emotes having been rolled out, Bender is happy to report that the “community has responded well” to them, which has encouraged the team to do more work to improve accessibility. “Ultimately, for me, we’re not making a game,” Bender says. “We’re making a universe, which contains myriad different types of people with different backgrounds, experiences, and unique ways of experiencing and dealing with their world. We felt like this was an obvious step to make our community more inclusive, and this is one of the first steps we’re taking towards going in that direction.” 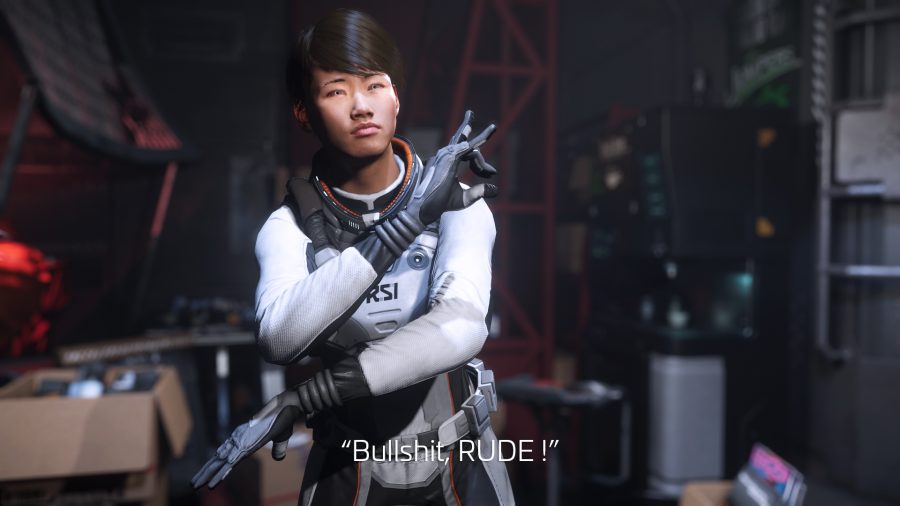 One of the more reachable goals for now is to “continue expanding the sign language emote library,” according to Brewer. “We may even explore adding additional sign languages, but will at least continue to add multiple emotes.” He also points towards the other, more unexpected benefits that expanding ASL could bring to Star Citizen.“For us, and I’d imagine in other games, being able to communicate silently also can create tactical advantages,” Brewer tells me. “So it’s not just us being nice – even though we’re incredibly nice – it actually has ramifications on gameplay and socialising.”

Imagine a mission in which you need to communicate with a fleet of players but talking too loud has the possibility to alert the enemy to your position – ASL would be the best tactical option. The idea that ASL could change up the tactical options of other games in similarly exciting ways is one worth spreading too. Brewer adds that the systems the Star Citizen team used to implement ASL “are pretty standard for gaming in 2019,” so there’s reason to hope other big game studios will follow suit.

Need a new frontier? Try out the best space games on PC

“Motion capture and emotes are pretty much table stakes for game developers at this point,” Brewer says. “It’s simply a matter of prioritising the emotes developers want to put in their game.”