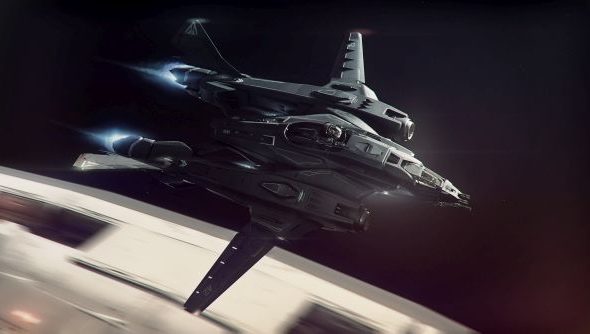 Gamescom’s live demo of Star Citizen had plenty for fans to get excited for – planetary landings, ground vehicle battles and EVA starship scavenging – but the biggest roars were reserved for an opening hatch.

The playthrough saw two players heading out on their first mission in a Freelancer starship, now with fully animated hatch and ladder opening, much to the crowd’s delight. The mission itself required a planetary landing and entering an underground port bazaar, with window views of the mining colony it had been built around allowing a player in the ship to see the player inside the building demonstrating the seamlessness of Citizen’s persistent universe.

Fully voiced and animated quest givers provide a lot of personality for a space game, and hubs like the bazaar with their backing audio of bustling chatter go a long way, while Roberts explained that more moving members of NPC crowds will help sell the illusion in future updates.

After embarking on the mission, retrieving a black box from a destroyed freighter with a ship-to-ship EVA, some light zero-G gunplay, and grand theft speederbike, the pair of players went in search of the pirates who had destroyed the freighter to relieve them of their stolen cargo.

Despite some minor graphical glitches and being unable to jump high enough to get onto the Freelancer’s cargo ramp after landing on a slight incline, the demo showed a very comprehensive space game featuring many of the minor multiplayer perks players had expected of No Man’s Sky. Still no solid release date, but some promising progress nonetheless. Check it out below.