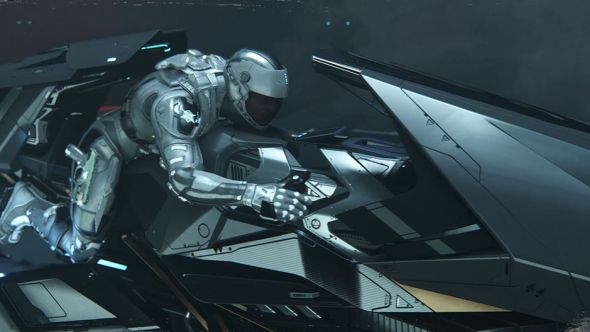 Over the weekend some news came out about the latest financial dealings of Foundry 42 and Cloud Imperium Games, the money-making monolith that’s slowly (ever-so slowly) putting Star Citizen together. They’ve taken out a loan, a pretty ordinary thing to do, and put up much of their assets as collateral, a slightly less ordinary thing to do. As the usual buzzards have been circling, hoping for their long-sought corpse, Cloud Imperium Games issued a statement clearing up the whole matter.

While you continue that wait, here are the best space games on PC.

The drama began, as it so often does, with some sleuthing of the various legal documents tracked by Companies House, the UK governing body for limited companies and their dealings. The latest listing for Foundry 42 there – Cloud Imperium Games’s British studio – includes a link to a PDF of their latest loan agreement with Coutts & Co, a highly regarded British business bank. Due to the complex nature of high level financial deals, it’s almost indecipherable, but section 23.1 makes it rather clear what the penalties for non-payment are – Coutts and chums would essentially own “the game.”

And that is where the complexities begin. As explained by Cloud Imperium Games’s co-founder and vice-chairman Ortwin Freyermuth on the forums, this collateral “specifically excludes Star Citizen” referring only to single-player portion Squadron 42 (which is what Foundry 42 are making, if you didn’t catch the name link). He also explains that the loan is to cover an advance on a tax rebate:

“Foundry 42 and its parent company Cloud Imperium Games UK Ltd. have elected to partner with Coutts, a highly regarded, very selective, and specialized UK banking institution, to obtain a regular advance against this rebate, which will allow us to avoid converting unnecessarily other currencies into GBP. We obviously incur a significant part of our expenditures in GBP while our collections are mostly in USD and EUR. Given today’s low interest rates versus the ongoing and uncertain currency fluctuations, this is simply a smart money management move, which we implemented upon recommendation of our financial advisors.”

He goes on to explain why this is nothing to worry about when it comes to the possibility that a bank may end up owning all that IP and work, saying that “Per standard procedure in banking, our UK companies of course stand behind the loan and guarantee repayment which, however, given the reliability of the discounted asset (a UK Government payment) is a formality and nothing else.”

Going by this it’s another mountain made out of Star Citizen’s long-suffering molehill. There are contrary readings of both the documents and the official statement in this lengthy Reddit post, if you’re interested. We’re contacting both Cloud Imperium Games and the bank itself for further clarification.