It’s going to be a while before we can say Star Citizen has shipped, but it’s certainly very shippy. Chris Roberts and Cloud Imperium have shown off the latest fragment of the space-and-everything-in-it sim at Gamescom: say hello to multi-crew ships. Yep, we’ve been shown vessels piloted and wandered through by several players at once… and it’s sort of brain-boggling, to be honest.

Multi-crew ships build on Star Citizen’s Arena Commander module – spawning a small group of players on a space station and leaving them to make their own fun with a craft big enough to house them all.

Players can take the controls, man turrets, and embark on space-walking missions of their own devising. 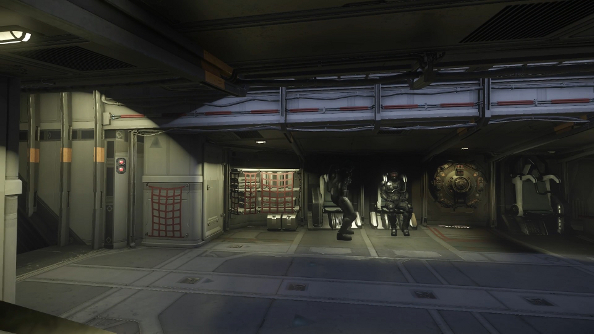 The mode’s physics is calculated locally on player PCs – meaning that if the pilot sets the ship spinning the players walking around its belly remain upright, each experiencing their own version of gravity.

It’s far from finished, but the Star Citizen booth at Gamescom hosted a handful of PCs, each displaying utterly different perspectives on the same events. And in the centre sat Cloud Imperium king Chris Roberts.

“You’re not going to have 50 systems to adventure in, but I think most people are going to have a lot of fun,” Roberts told PCGamesN. “I’m actually expecting people to make up their own action story arc. So what we’re planning is, we’ll just have different areas you can fly in and visit and do things in, or have some AI that will spawn.”

That laissez-faire approach to design continues with objectives, which are likely to be self-set.

“I was thinking of something like what we call freeflight mode,” said Roberts. “And we’ll have some more team-oriented stuff where you could have a combination of the bigger multi-crew ships and the smaller [ones]. A team battle thing. It should be pretty good.”

We’ll have more on how Cloud Imperium are beginning to lash the disparate parts of Star Citizen together very soon.