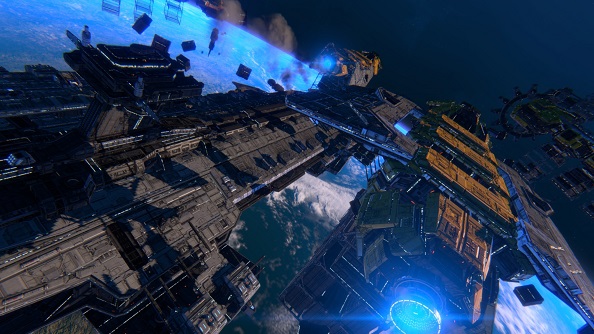 Ah space, the deep abyss that we can only hope will eventually consume us all. In Star Conflict, Gaijin’s massive space MMO, you’ll be able to explore every last crevice of the abyss (sorry, the galaxy) with an entire fleet at your command. Star Conflict gives you the freedom to play in a variety of ways; from teaming up with other allies to investigate areas and hunt enemies, or simply to build up your ship and take on other players.

You’re going to want to do this in style though, and that’s why we teamed up with Gaijin to give away 300 codes for the Black Hort spaceship, a premium vessel that generates higher credit and synergy income for players, has two extra cargo slots and doesn’t cost a penny to repair. Lovely.

Star Conflict recently received the major Evolution Update, which introduced new forms of vessel from the Ellydium Corporation which can change their characteristics through ‘evolution’, offering a massive amount of customisation for players. Additionally, players will be able to unlock two rare ships until January 17; the rank ten attacker ‘Dart’, of the Jericho command, and the Empire’s new rank 10 frigate ‘Gargoyle’.

We’ve got 300 of the premium spaceships to give away, and all you need to do for a chance to win is enter via the widget below. Each action is worth one entry, so the more you enter, the more chance you’ll have of winning. We’ll also need your email address so we can send you a code upon winning – no spam, we swear from the bottom of our space-heart!

Here’s how to redeem your code if you’re one of our lucky winners:

If you like what we do and want to stay in the loop so you’re among the first to know next time we host a giveaway, head to our Facebook page and give it a like.