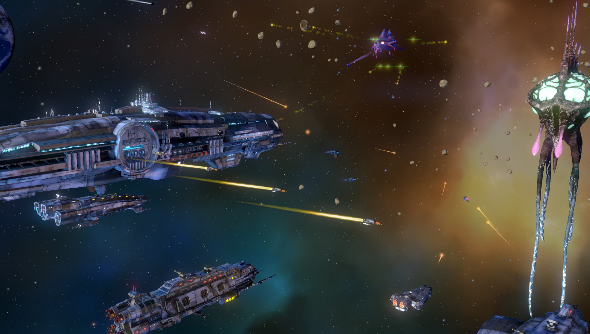 It’s warning shouts like these that you’ll feel like giving when taking command of a small fleet of heavily-armed starships in Star Hammer: The Vanguard Prophecy. A turn-based tactical strategy developed by Black Lab Games, its deep-space combat captures the thrill and risk of beating overwhelming odds.

But, like a traitor on board your intergalactic vessel, there’s something quietly sabotaging all of Star Hammer’s achievements. Are these problems enough to sink the ship? 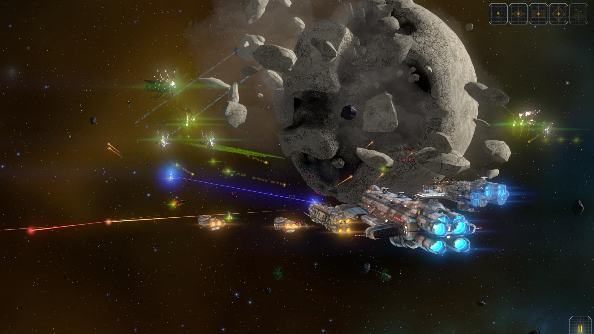 Star Hammer uses a ‘WEGO’ turn based-based system. During a paused phase you’ll plan your fleet’s next movement and combat actions. Hitting the go button starts a short duration where combat becomes real-time and your ships will move and fire every munition they have. The game then pauses again and asks you to assign new orders. Whilst you are inputting your commands so is the AI. Turns resolve simultaneously.

The mechanics of Star Hammer’s combat are elegant, streamlined. It’s very possibly the best system I’ve used for tactical space combat. Simultaneous turns means forward planning is vital. You need to anticipate enemy moves since they could happen the moment you hit the play button. It’s not just about making sure you fire off a missile at just the right moment; positioning is important, as colliding with an enemy flightpath (or even a friendly!) will stall your engines, or even destroy your ship outright. Every turn is a logistical challenge.

Completing these turns is as close as you’ll get to feeling like Battlestar Galactica’s Admiral Adama. Selecting ships shows off their movement potential and weapon range arcs, making it easy to see where you need to be to open fire on targets. A ghost model of your ship shows where your unit will be at the end of the turn, which helps make sure your fleet don’t bash into each other. Should the range of your movement or weapons not suit your needs, you can divert power through each ship’s systems. Push it completely into engines to get to your destination sooner, dedicate everything to weapons to pack more of a punch with every shot fired, or bulk out shields during a dangerous retreat. 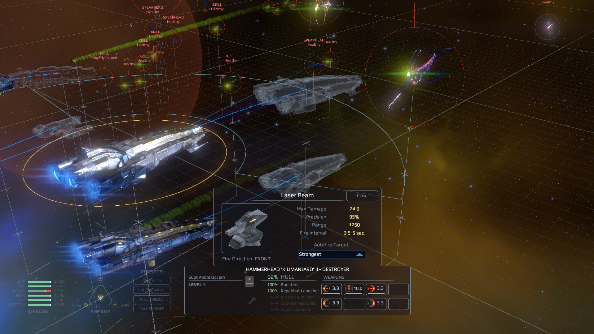 The game gradually introduces you to six classes of ship, which you’ll use in various combinations of your choosing for each mission. You only ever fly with a small fleet, which means emphasis is always placed on tactical use of each ship’s strengths rather than just trying to overwhelm the enemy with hundreds of vaguely planned strikes. They also permanently stay dead when destroyed, so unless you’ve got plenty of cash for reinforcements, you’ll want to keep them flying. You begin with the likes of Raiders and Corvettes, ships that are highly maneuverable but only able to fire straight ahead with basic blasters. Later on, the likes of Frigates and Dreadnaughts allow massive firepower from all angles, and are hefty enough to be used as shields for weaker units. They’re mounted with more specific-use weapons, such as counter-measures that can be fired into empty space to create a defence against incoming missiles, and heavy laser beams that slowly apply the pressure.

Star Hammer’s combat is brilliant. It reminds me of times sat around a table playing the X-Wing Miniatures game, but with the added thrill of animations and a cool soundtrack. It would be perfect as a multiplayer game, but alas it’s single player only. This needn’t be such a down side, but unfortunately the 60-odd mission campaign is exceptionally dull. It does its best to offer excitement with a branching story where you can choose which missions takes priority, but it falls down by using an almost identical objective template every mission. The stakes in the story may be higher, and the enemies are different and more challenging each time, but it’s the same mission over and over: destroy everything. Even when the game introduces new concepts like ‘hunt this specific enemy’ or ‘escort this ship to safety’, it always ends up being replaced by the need to wipe out the enemy.

Absolutely blasting the enemy to kingdom come is fun. They’re a organic race much like Starcraft’s zerg, and their units are ugly buggers with a range of interesting abilities. Fighting them is a genuine challenge. But twenty missions in you’ll be begging for objective variety. 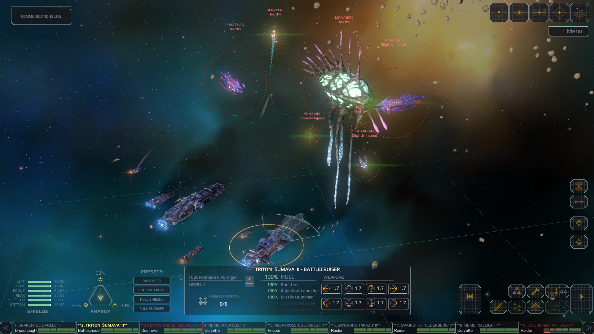 To be fair: the developers do try to mix it up: rating your playstyle and then blocking off missions according to that rating. In practice this really doesn’t work. Because the missions are so focussed on destroying every unit on the map, the game feels skewed to aggression. On my playthrough, no matter how hard I tried to hold back and play slowly and strategically, I only ever picked up aggression points, and thus the defensive story branches were always closed to me.

Star Hammer’s other nice idea that doesn’t quite pull off is crew social ratings. As the campaign progresses you’ll recruit new crew members. A line graph between each member shows how hostile or friendly they are with each other. If every crew member is friendly with each other, they give your fleet a buff. Keeping crew members friendly is simply a case of adjusting their perks between two options, finding the right combination to keep the lines between each person green instead of red. This just doesn’t make sense at any level, feeling like a half-finished feature with no logic applied. The ability to swap perks at any time removes any sense of importance to what decisions you make regarding your crew’s abilities.

Star Hammer’s combat systems are truly exceptional, but they’re trapped in a bland, forgettable campaign. It’s a story marred by odd design decisions and some bargain-bin level dialogue; one that seems wholly content to limit the potential of its ship-to-ship encounters by failing to introduce anything more exciting than more enemies to obliterate. Some clever mission design would have gone an exceptionally long way here. If you can deal with a series of skirmishes sewn together with a B-movie sci-fi narrative though, being an Admiral at the helm of Star Hammer can be a real treat.