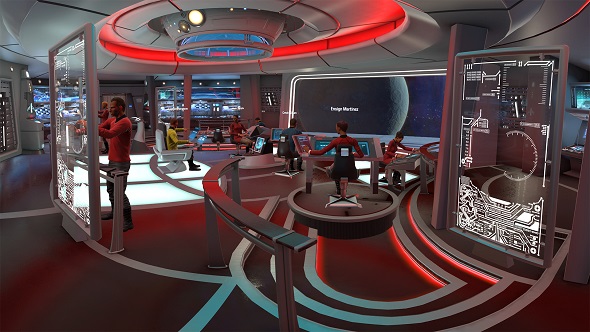 If you’re in the market for a VR headset, HTC may have something to sweeten the deal. As part of a special promotion, every Vive headset bought in June will come bundled with a free copy of Star Trek: Bridge Crew.

Captain, you’d best check this list of other great VR games before we leave port.

For those who aren’t aware, Star Trek: Bridge Crew puts players behind the eyes of a crew member on board the USS Aegis as they explore the final frontier. You can play with up to three other players, with each person fulfilling the role of an officer. Besides being captain, wannabe Starfleet members can choose between being an engineer, a tactical officer, or a helm officer. It is then your job to complete a series of story and randomly-generated missions, while keeping your ship from being destroyed by a Klingon raiding party.

Each officer has a specific job like controlling the shields, navigating through space, and commanding the Aegis’ weapon systems. You’ll need to communicate with your team in order to successfully complete your journey through space, so it’s probably not the best game to play after a few beers.

As well as local play, Star Trek: Bridge Crew is playable in online co-op. I’ll leave you to imagine how well that usually goes. With it currently going for $44.99/£39.99 on Steam, getting Star Trek: Bridge Crew bundled in with the Vive sounds like a pretty good deal, especially when you consider it’s the one of the first real big-budget VR games.

You will also receive all of the Vive’s other VR pack-in games as part of this deal, so you should have no shortage of games to play when you get your headset. This offer will expire at the end of the month, so order soon if you are looking to join Starfleet. No news on whether HTC will be offering other bundles in future months, but expect more information to come during E3.