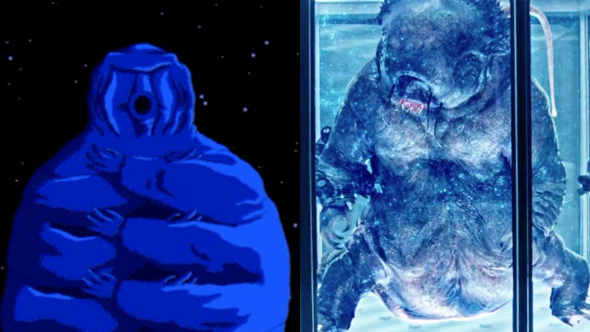 A big part of the plot of the new Star Trek series is that Federation scientists have discovered they can instantaneously travel to any point in the galaxy by piggy-backing on spores found in space. Anas Abdin, the developer of Tardigrades, an adventure game that’s been in development since 2014, points out that this is extremely similar to the plot of his game.

Here are what we think are the best space games on PC.

Abdin has written up the similarities in a blog post, saying it was to head off any criticism that his game had copied the new Star Trek series. “I haven’t stolen ideas from the show at all since all of my posts from the devlog are dated years before the show,” Abdin writes.

Central to both series, is using organisms to travel quickly across space. In Tardigrades they’re called tardigrades, after the tiny creatures scientists have found living in extreme conditions all over Earth, and which they have found can even live for a time unprotected in space. Although, rather than the 0.5mm size tardigrades grown in the wild, the ones in the game are people-sized versions.

In Star Trek Discovery, mycelium spores are harvested and used to power a spore drive. However, also using the spores scattered across space to travel the universe are giant tardigrades. In Discovery, they capture one of these creatures and are able to exploit it to better harness the spore travel system.

It does seem an extremely odd coincidence for both Tardigrades and Star Trek Discovery to hit on using giant versions of a resilient Earth creature to hop around the galaxy.

Tardigrades has been in development since 2014, while Discovery was only greenlit in 2016, so there’s no way that Tardigrades lifted from Discovery. The reverse is hard to prove if indeed it did happen. After all, tardigrades have a history of being tied to space travel. The little creatures were taken up to the ISS space station and released into the vacuum of space (where they survived for more than a week).

There are a number of visual similarities between the game and the TV show, too:

Abdin also draws similarities between the characters in his game and the series but they seem a bit of a stretch. For instance, they both star a black woman as a main character, and both feature a gay couple. Both examples seem too general, particularly in comparison to the strength of the tardigrade comparison.