But as I pull back hard with my X-Wing to escape a target-locked concussion missile, only to swoop back in behind its sender and blast him to phosphorous-white smithereens with laser blasts, I realise perhaps that Attack Squadron – with its 16 players and deep-space battlegrounds – may be the X-Wing vs TIE Fighter successor nobody expected. 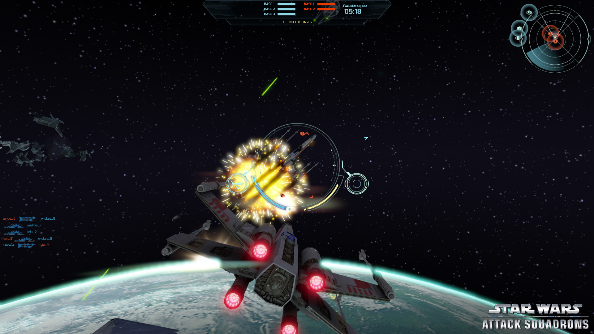 With one target out the way, I continue to thunder down closer to the surface of the Death Star. This is the Empire’s second attempt at building a murder moon, and so its armour plating is covered with jutting scaffolding and half-finished blaster turrets. Among this blocky labyrinth fly fifteen other players, looping out the way of incoming turret fire and desperately keeping enemy fighters in sight to achieve target lock for their missiles. My HUD flashes red, shouting that a Proton Torpedo is on my tail. I disappear into the space station’s notorious trench network to escape it.

Escaping the lock is surprisingly easy, and almost entirely down to Attack Squadrons’ simple controls. It’s an accessible flyer, lacking the twitchiness of arcade games and the depth of the X-Wing space sims, but offering the kind of experience that’s perfect for a lunch-time dogfight. Single button presses cause your craft to break out into a evasive loop, or spin around to face a chaser. Banking too hard to the left or right will revert your ship back to level position and prevent you from spiralling out of control. This may sound all a bit restrictive, and does indeed stop you from pulling off some maneuvers like barrel rolls, but it lends itself well to quick, unfrustrating play without any real need to learn how to fly first. 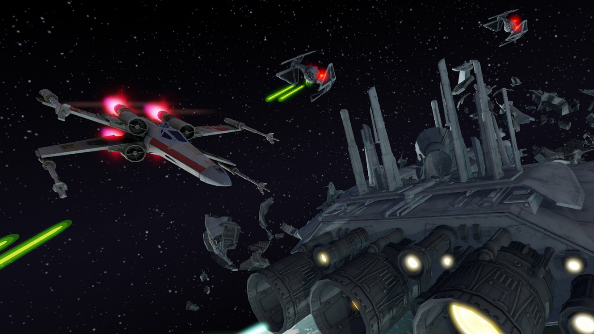 I’ve escaped the torpedo, but I’m still in his sights. Despite the maze of twists and turns, I can’t lose him. I attempt to swerve and cause him to clip his wing on a wall and crash, but his ship’s energy shield just brushes the environment off. He’s inching closer. The easy flight controls means we won’t lose each other; we’ll have to duke it out. But there’s no way for me to fire backwards, and his cannons are now firing twin-linked, dishing out twice the punishment. I do have one option though. I divert all power from my weapons and engines into my overshield, reducing me to a slow moving object, but one buzzing with damage absorbing energy. It keeps me alive long enough for a fellow squad mate to pick my aggressor off, allowing me to blast back up into the open skies and start hunting for prey of my own.

As the game ends a few minutes later, I’m rewarded with Galactic Credits. The in-game currency is used for purchasing upgrades and new ships, but in typical free-to-play tradition you need a massive amount of them to get anywhere notable. Entry level upgrades can be purchased with real-word cash, but to get any further than a small single-digit stat boost you need to invest earnt money and scrap materials in a crafting system. New ships demand a staggering tens of thousands to take a place in your hangar. 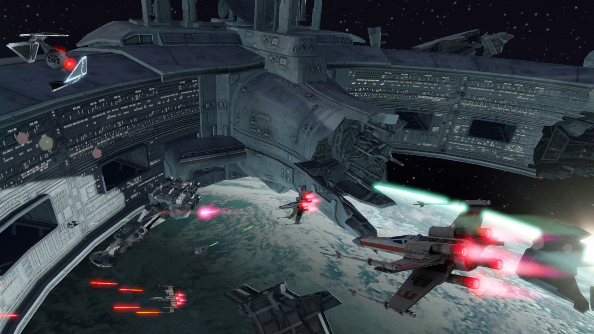 It’s with this system that I worry about Attack Squadron’s long-term appeal. Its combat feels like a wonderful little break-time pursuit, but the progression system grinds against that, insisting on prolonged play to achieve anything interesting. Everyone starts with a training model X-Wing, and I can see a chunky percentage of players never escaping that cockpit. The system does feel balanced heavily against the pay-to-win template, but at the expense of demanding a high time commitment. Its 8v8 game modes are fun but shallow; the kind of experience that would benefit from a level playing field rather than a prolonged, unlock based career.

Attack Squadron is a game to be played with your lunch wedged in your mouth and crumbs falling in the keyboard, but Disney want it replace your evening raids. Without a Jedi mind trick, that’s just not going to happen. The game definitely has wings, but its engines just need some refinement if it is to truly soar.