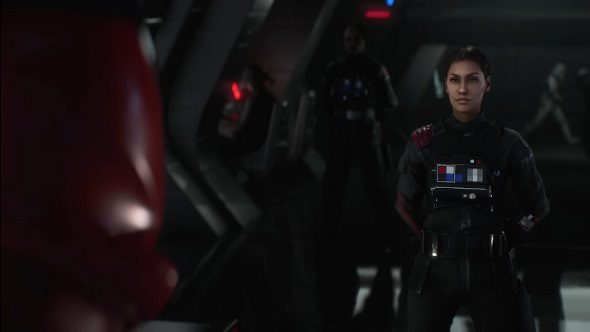 In a new trailer for Star Wars Battlefront 2, members of the narrative team have discussed how the game’s single-player campaign will shed light on those living within the Empire. Rather than casting Imperials as the out-and-out baddies, Battlefront 2’s story hopes to show the people behind the Stormtrooper helmets.

Bone up on your Star Wars knowledge with our list of the best PC Star Wars games.

Coming into Battlefront 2, game director Mark Thompson states the team at EA and Lucasfilm knew that they wanted to tell a soldier’s story. Rather than telling the same old tale from the Rebellion’s point of view, the studios wanted to show the Empire’s side of the story. Taking players through from the destruction of the Second Death Star at the end of Return of the Jedi to the events of The Force Awakens, Battlefront 2’s campaign should provide new insight on the Star Wars canon we all think we know so well.

To help this, protagonist Iden Versio is entrenched within the Empire. She is an elite Tie Fighter pilot and sworn protector of the Empire, her father is a high-ranking admiral and her family have always been loyal to the Imperial way. She is then the perfect candidate to believe in the good that the Empire can do, and should act as a long-awaited counterpoint to the constant depiction of the Imperials as nothing but space Nazis.

Besides Versio who is clearly high up in the Imperial food chain, EA and Lucasfilm are keen for players to “meet the people inside the Empire” and show what the average Stormtrooper is really like. Rather than the Clones in the prequel films, the Stormtroopers aren’t bred for war; they are non-conscripted soldiers who are all fighting for their own reasons and goals. By placing players inside the Empire, they should hopefully understand and maybe even sympathise with the actions of Versio and Inferno Squad.

We’ll no doubt get an extended look at Battlefront 2’s story at EA’s Play event on June 10, so have your targeting computers locked on that date. Otherwise, we’ll find out the true tale of Inferno Squad on November 17.