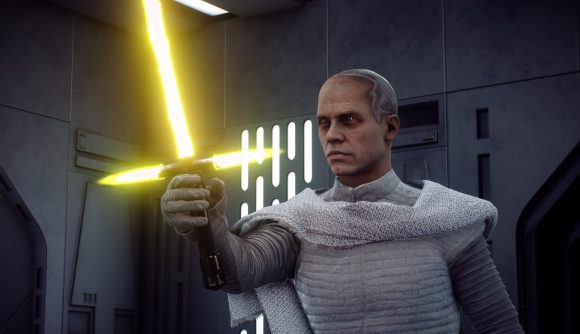 The trailer for the mod by user xD0IT (appropriate) shows off the Pope carrying Kylo Ren’s lightsaber (in gold) and sprinting full speed at some of the generic stormtrooper enemies. Along with the classic erm, papal long robes, the mod comes with a slightly more athletic Pope-themed skin, and then the Pope, but with a golden Kylo Ren mask on. Come to think of it, that lightsaber looks like he’s holding a golden cross.

Star Wars Battlefront already has a selection of the characters from the newest trilogy of films, but at no point do I recall seeing Pope John Paul II in them – partly because this particular Pope passed away in 2005.

It’s hard to think of a reason so much time has been dedicated to making this happen but I’m sure the trailer will put a smile (or a frown) on your face.

The mod is available for download now but as with all mods, download at your own risk! Hopefully, it doesn’t constitute some kind of sin.

We’re just still asking if the Pope is Sith or Jedi. He’s wearing white, so he looks like a Jedi, but the Popatine joke is far too funny not to laugh at.