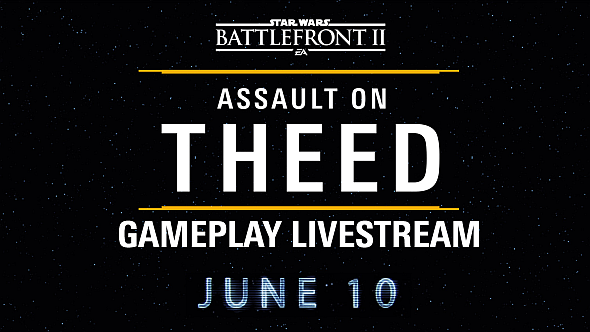 Your first glimpse of Star Wars: Battlefront II gameplay is just around the corner, and now we know what you’ll be seeing. At E3 on June 10, EA will show the Assault on Theed.

For more space operatics, sample one of the best PC space games.

In case you’re not cool enough to know all about Star Wars, Theed is the capital of Naboo, and featured heavily in Episode I: The Phantom Menace. It’s a beautiful city of lakes, vines, and soaring golden buildings, and should make a dramatic setting for the battle.

YouTubers and streamers from the Battlefront community will form two teams of 20 and show you what Battlefront II is all about. But EA are saving a single space in the battle for you, if you enter the sweepstake by tweeting @EAStarWars explaining why you love Star Wars games.

If you’d rather watch, the stream goes live at 12:30 Pacific (20:30 BST), and can presumably be viewed on EA’s Star Wars Twitch channel, though helpfully, the announcement doesn’t specify.