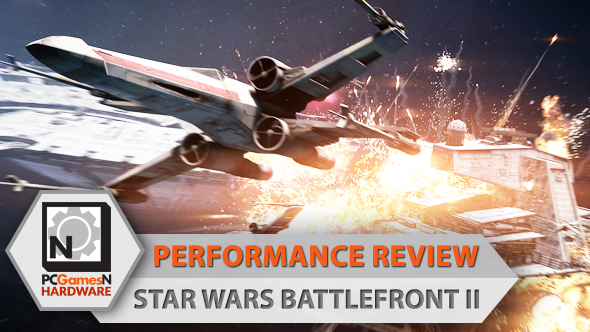 DICE have a history of creating graphically impressive and demanding games, so the PC performance of Star Wars Battlefront II is something that many of you probably have your eye on. Is its frame rate as controversial as its loot boxes, or will the settings help bring balance to the Force? That’s what we hope to answer with our Battlefront II PC performance review.

But is it any good? Find out in our Star Wars Battlefront II PC review. 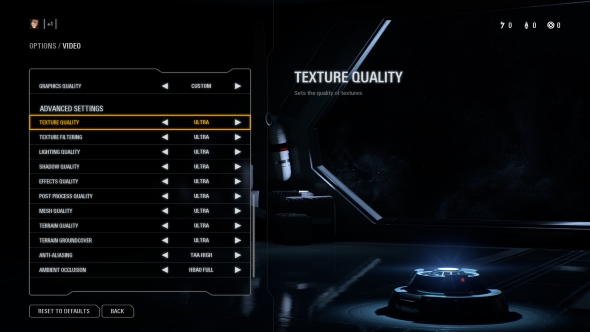 Battlefront II’s advanced graphics menu is comprised of 11 settings, all of which should be familiar to anyone who has dabbled in PC gaming before. There are quality settings for texture, lighting, shadow, effects, post process, mesh, and terrain, all of which can be configured to one of four options: low, medium, high, and ultra. In addition, there are also texture filtering, terrain ground cover, anti-aliasing, and ambient occlusion settings.

Elsewhere, there are four different colourblind profiles, an FOV slider, an option for dynamic resolution, and the classic video resolution options. You can also select your API from this menu – either DirectX 11 or 12.

The controls menu holds the keys to adjusting a variety of elements, from complete keyboard rebinds to adjusting the deadzone of analogue sticks on a controller. There are control profiles for both on-foot and in-vehicle, so you can have separate setups for each of them. This is useful if, for instance, you prefer normal shooting to be on a standard axis, but flight controls to be inverted.

For our graphics analysis, we compare screenshots taken on the four standard presets of ultra, high, medium, and low. Unlike many modern games, these presets can be swapped between in-game without rebooting. 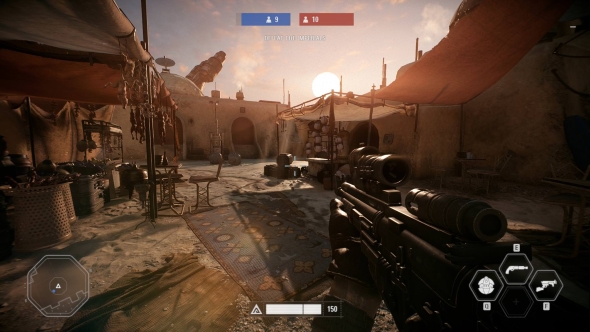 My oh my, what a pretty game Battlefront II is. That is no real surprise, considering how great DICE’s previous games have looked, but there is very little to fault in their recreation of Tatooine in the image above. All the details are there, from authentically bumpy sand surfaces to the god rays beaming from one of the planet’s twin suns. It is the combination of high-grade textures and excellent lighting that make this scene very attractive. Pay close attention to the realistic, soft shadows, too; they won’t stay that way if you scale down the settings.

You would think visuals like these would come at a cost but that is not the case at all. On our pretty standard i5/GTX 1060 setup, a match of Battlefront II runs at an average of 116fps, with a minimum recording of 99fps. That is astonishing performance for a game that looks so good. 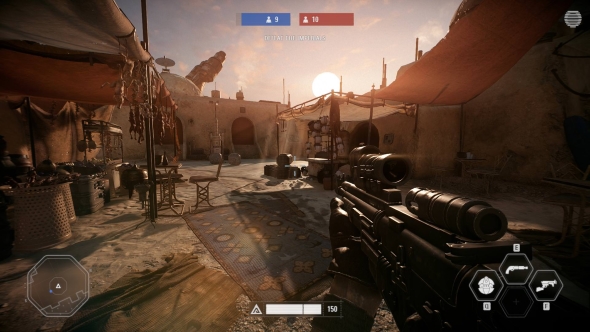 There are few differences between ultra and high settings, but those that do exist are immediately noticeable. There is less debris scattered on the ground, and the sand ripples are notably less bumpy, especially on the left of the image by the table and chairs. Lighting remains mostly intact, but shadows are now more defined and thus look a touch more artificial than they do in ultra. Overall, this is a great image, but there is a clear separation between this and ultra.

Unfortunately, giving up those effects does nothing to improve performance. Our tests resulted in practically identical results, meaning on a similar setup there is absolutely no reason to choose high over ultra. For those with less powerful rigs, this will no doubt prove an important setting, but modern gamers should be able to opt for top-tier quality with little issue. 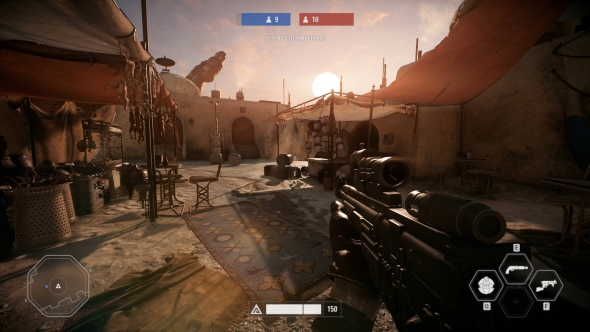 Medium settings see the terrain smoothed out even further, with the ground almost entirely flat rather than riven with sand. Further floor details are also removed, with less debris present than before, and no sand elements spilling over onto the rugs. The lighting is still pretty, but certainly less complex; there are more distinct light and dark areas, as opposed to a natural gradient between the two. Aliasing is also starting to occur, most notably on the straight lines of the left-hand market stall.

Performance at medium averages out at 132fps, with a minimum of 106fps. Again, it is completely unnecessary performance boosts for anyone with a reasonable rig, but good news for those with less power to spare. 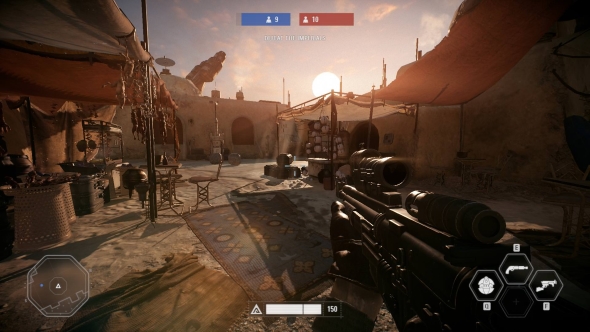 At low, it becomes difficult to be as impressed by Battlefront II’s visuals. Everything is subject to jagged edges thanks to a lack of anti-aliasing, and the reduced lighting quality produces blocky shadows and a washed-out look. The terrain is now flatter than it has ever been, with low-res textures that fail to convey the grit of the sand or weave of the fabrics. The most striking difference, however, is that some assets have been entirely removed. On the left-hand market stall, the floor-mounted bowl is missing the spiked lid and appears less rounded, while the round object that once stood atop the perforated baskets no longer exists.

Such sacrifices will net you an average frame rate of 198 and a minimum of 152fps. If you are gaming on the smoking remains of a TIE Fighter’s on-board computer, this is probably good news. We recommend at least upgrading to a second-hand X-Wing CPU, though.

To see how Star Wars Battlefront II performs on different hardware, we have tested the game on four different graphics cards: two from Nvidia and two from AMD. We have sampled from both the current and last generation of GPUs in order to offer the most useful information.

All four cards are tested on the game’s ultra preset, which dials every texture option up as high as they will go. For the test, we play a two-minute sample that involves walking, running, jumping, and combat. The same section is repeated three times in order to find an average.

It is clear from the data that DICE have optimised Battlefront II for a great variety of hardware. Not one of the cards dropped below an average of 60fps, meaning that at 1080p you are pretty much guaranteed to beat the game’s performance on console. There is also very little difference between the average and minimum frame rates on all cards, demonstrating that the performance is smooth and stable on both Nvidia and AMD hardware. Overall, this is a very good picture.

How to run Battlefront 2 at 60 fps

If you are running one of the cards we have tested you will no doubt be feeling pretty confident about your ability to run Battlefront II at a great frame rate. In this section, I would normally outline what kind of tweaks you would need to make in order to squeeze an average of 60fps from you GPU, but with Battlefront II there is no need. Simply set the game to the ultra preset and you will be certain to experience a lovely, smooth, high-end frame rate.

Regardless of whether you are running a current-gen, mid-range card, or one of AMD’s older models, choosing ultra settings – with full HBAO ambient occlusion and TAA anti-aliasing – will do you proud at 1080p. Our AMD R9 380 averages at 62fps, so if you do find that this dips a little, tweaking options like post process quality or ambient occlusion may help you grab back a few frames.

Battlefront II’s release is surrounded in controversy, with the game’s loot boxes taking away from what is otherwise a fun, well-designed Star Wars shooter. That’s a shame, because were they not there, attention could be paid towards just what a brilliant job DICE have done on the PC version of the game. You can tell that our platform has been at the forefront of their mind, or at the very least not an afterthought. During a period of excellent PC releases, it is even safe to suggest this is the best performing game of the season.

So, if you are happy to set aside monetisation problems and dive into the galactic battlefields of a galaxy far, far away, make sure you do it on PC.

Can you run it? Check your PC against the Star Wars Battlefront 2 system requirements 2021 on PCGameBenchmark.