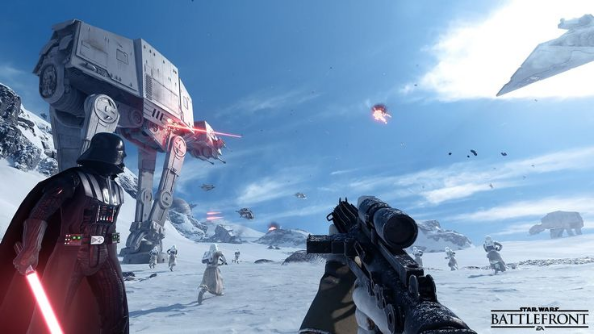 The Star Wars: Battlefront alpha is in progress right now, and chances are you didn’t get an invite. That doesn’t mean you get to miss out entirely though, because as long as YouTube exists there’s always going to be someone who’s happy to record footage and upload, which is exactly what’s happened with the Battlefront alpha. 10 shiny minutes are available for your viewing pleasure below.

The video – captured on PC – shows footage from the 20v20 Walker Assault on Hoth game, where rebels and Empire soldiers clash on the ice-planet’s snowy battlefields amongst stomping AT-AT walkers. The footage spends time exploring the heavily detailed map from both sides, so you can get a good glimpse at equipment for both the rebels and Imperials. Amongst the kit is the exceptionally fun looking jetpack, and plenty of beautifully reproduced Star Wars weapons.

The map itself features all the iconic areas from the film set, including the trenches dug into the snow, and the rabbit-warren that is the rebel base. There’s also objectives to complete, such as bringing down the rebel uplink through destruction of key equipment.

If leaked footage just isn’t enough, be mindful of the beta that’s planned for early October, which will be available on Origin.