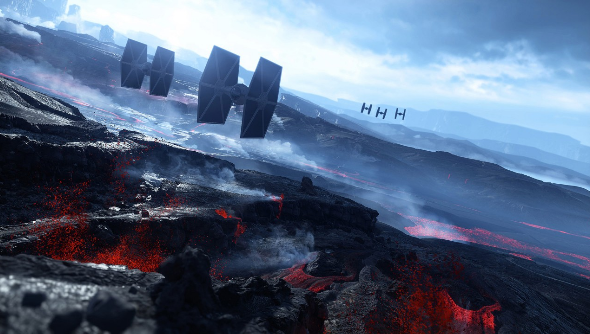 DICE have offered up a little more detail on their huge Star Wars: Battlefront project, including the number of multiplayer maps we can expect to play on: 12. Many of them will be familiar locations from the films, such as Endor and Hoth, but others are set on planets only mentioned by characters or featured in books. One of such planets will be Sullust, a rocky, lava-scorched world.

You’ll almost certainly be familiar with Sullust’s natives: the ridge-faced short chaps, one of which is featured in Battlefront’s trailer, and Ten Numb was a B-Wing pilot assaulting the Death Star in Return of the Jedi. In a blog post, DICE explained how they set out to Iceland to explore locations for inspiration for Sullust. Iceland was “a unique and ideal location which in multiple areas looked like another planet,” apparently.

“We used the source material that we gathered from Iceland to shift and bend to the design detailed in our concepts, which was very fun and difficult process,” said Senior Level Artist Petter Skold. “This was different than content captured from locations of Endor, Hoth and Tatooine which could be used right away.”

The twelve multiplayer maps will be various shapes and sizes, and will also be in addition to the other locations served up in Star Wars Battlefront Missions, the small-scale co-op scenarios.