EA and DICE have been quite the tease when it comes to exactly what’s inside the highly anticipated return of Star Wars Battlefront, but today we can add the return of one of the best game modes that the series could muster: Heroes vs. Villains.

At least, according to the spanish version of the official website for the game, which mentions the game mode explicitly.

The confirmation comes directly from the official spanish Star Wars Battlefront website, as it details the various mutliplayer modes coming with the game: 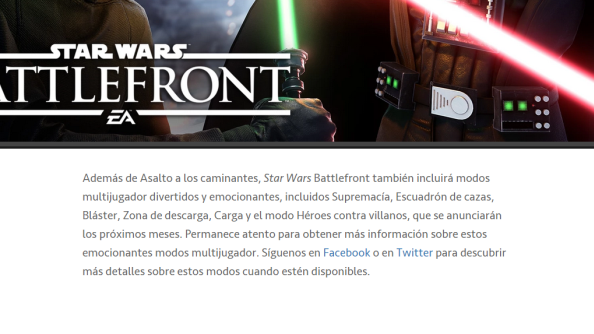 And here’s the text translated thanks to reddit user /u/thementorassassin16:

“In addition to Walker Assault, Star Wars Battlefront will feature immersive, fun-filled multiplayer modes including Supremacy, Fighter Squadron, Blast, Drop Zone, Cargo, and Heroes vs Villains mode, that will be announced in the months ahead. Stay tuned for more information on these exciting multiplayer modes.”

To check it for yourself, just right click this link in Google Chrome, and open it up in an incognito window.

Strangely though, the mention of Heroes vs. Villains is missing completely from other versions of the official website, including the english one. Regardless, one cannot help but believe that this cannot be a simple error; you don’t accidently add in a game mode that doesn’t exist.

Heroes vs. Villains was a fan-favourite from Battlefront II, pitting the biggest, best, and the darkest iconic characters against each other in glorious deathmatch fashion. Jedi and Sith, bounty Hunters and smugglers; even Princess Leia took the call to action.

I’ll see you all in Mos Eisley, if EA/DICE bring back that map as well.