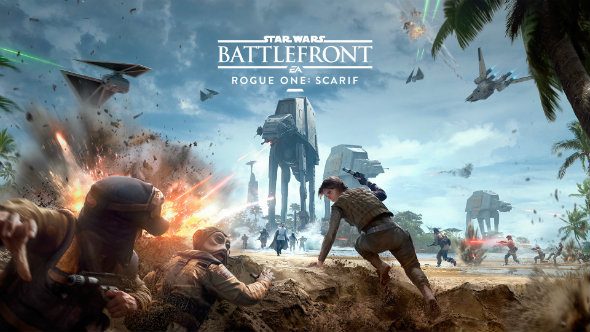 Star Wars Battlefront’s last paid expansion, Rogue One: Scarif, launches for Season Pass owners on December 6 – ten days before the movie hits cinemas. Unless the film is  literally just people shooting each other for two hours, I wouldn’t worry about spoilers, but you will get a taste of some of the gorgeous locations the movie will be hitting. They look like a far cry from the prequel trilogy’s ’90s FMV-style CGI.

Head to another galaxy far, far away in our list of the best space games.

“In Rogue One: Scarif you’ll battle across four new maps, including the sandy beaches of Scarif – an all-new tropical planet crawling with Imperials – which should look mighty familiar to anyone who saw the movie trailer,” say EA in the announcement. “Know that incredible scene in the trailer where the AT-ACT is marching through the waves? That’s the one!”

Over these four maps you’ll be able to control two new playable heroes – one from the light side and one from the dark: Jyn Erso and Orson Krennic.

The expansion also brings players closer to the seamless space battles of yesteryear, with “a new multi-stage game mode with space and ground combat” included. Presumably these will be split into distinct sections, but it’s better than nothing.

Check the new trailer out embedded above.